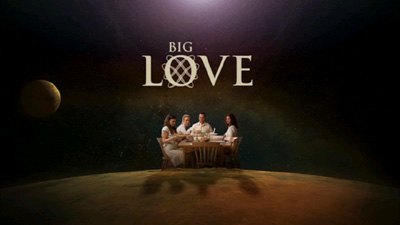 HBO's Big Love is not at all what I would have expected it to be. The high concept is pretty simple: Bill Paxton plays Bill Henrickson, the owner of a large home supply store in Utah, where he lives with his three wives. Though the Mormon Church has condemned polygamy for over a century (as the show is quick to point out), many splinter groups that carry on with the practice still exist in the U.S. Bill and his family may have left the United Effort of Brotherhood compound, but they maintain their adherence to "the Principle." Much of the first season is about how they conceal their lifestyle from prying eyes in the suburbs, and how they manage to cope with life together under three roofs.

When I heard about Big Love, I thought maybe the series would be satirical, or at the worst, a tired send-up with a harried husband suffering the craziness of being married to three women. In its execution, Big Love is neither of those things. Instead, it's a family drama about a very strange family, like Six Feet Under without all the dead bodies. Creators Mark V. Olsen and Will Scheffer have stumbled on a rather ingenious dramatic device. Yes, we see the unique headaches Bill encounters by being in a three-pronged marriage, but it's not just the standard sitcom woman-drives-man-up-the-wall plot lines. Instead, under the Principle, Bill is married to all three women and each wife is also married to each other (they refer to themselves as "Sister-Wives"). So, they have to establish their own union, as well, tiptoeing through the dangerous minefield of relationships to maintain the peace. The Henricksons are one large extended family, and the 12 episodes of the first season of Big Love are chiefly concerned with how the four spouses and their seven children co-exist.

The three ladies couldn't be more different. The first wife is Barb (Jeanne Tripplehorn), who is the only one who is legally married to Bill. She was not from the Juniper Creek compound, so not part of any polygamist sect (how this affected her birth family is the subject of one episode). She is a responsible, intelligent woman who is embarking on a new career as a teacher. When she got sick with cancer several years before, the fear of losing her and being alone is what caused Bill to feel a calling to return to the Principle. With Barb's consent, he married the cold and pious Nicki (Chloë Sevigny), the daughter of Roman Grant (Harry Dean Stanton), the head of the UEB. A couple of years later, Bill took a third wife, the somewhat bubbleheaded Margene (Ginnifer Goodwin, who played Johnny Cash's first wife in Walk the Line). At the start of the show, the family is occupying three houses on one suburban block. They share a giant backyard between them, and they can travel from house to house via the back. Bill comes and goes from the main house, and each wife operates out of her own. Barb creates a schedule that shuttles the husband to a different bed every night, so all the women get a fair turn at having him sleep over.

Many marital problems are broached over the debut season. Some of them are as simple as which woman will handle what chore, and others are unique to polygamy, such as what happens when Bill gets hopped up on Viagra and spends a little extra time burning it off in the morning when he's supposed to be changing houses. One of the best episodes, "The Affair," poses the question of what it means when Bill starts seeing Barb in secret. Can you have an illicit extramarital affair with a woman you are married to? Apparently if you are sneaking off to a hotel and lying to your other wives, then yes. Trust is a big issue amongst the women, and so they have their own internal struggles, such as when Marjene learns there was a vote to decide if she could join the family or Barb is nominated in a mother of the year contest. Additionally, there are problems for the children, too. The older ones, in particular, have a hard time getting by with their secret life. Temptations abound, and also the pressure that maybe someday they will be expected to enter into a polygamous marriage. 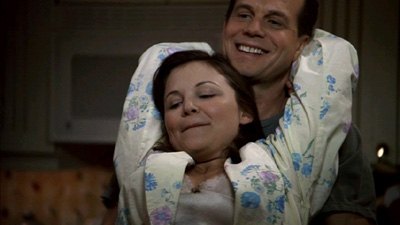 The fascinating thing about Big Love is that Olsen and Scheffer have somehow managed to create a show about a lifestyle that hardly anyone is going to agree with and still make their audience care about what happens to the Henrickson family. The tribe is constantly under threat, so when one of Bill's employees is snooping around or Marjene befriends the well-meaning religious couple across the street, it creates real dramatic tension. You don't want the family to get caught and be split up--which, in its own way, challenges how you think about polygamy. Which is even more fascinating, because Olsen and Scheffer have written the show so that not only is no judgment passed on the Henrickson family, but their point of view is not really endorsed, either. Sure, the characters have moments where they are forced to defend their way of thinking, but it's all part of the story, and even when they do, they are quick to point out that it's not right for everybody. While religion does play a heavy role in the family's life, it is not really a religious show. Their moral code is at play and they discuss various aspects of the Mormon faith, but it's slid in smoothly and without rhetoric or ridicule.

Beyond the family drama, there are other plot elements that elevate Big Love to a gripping serial. When Bill opened his store, he took a loan from Nicki's father. Now that Bill is making his business a franchise, he wants to cut Roman out. As the head of a renegade religious sect, Roman Grant is not a man to be trifled with. In fact, there is plenty of bad blood between the Henricksons and the Grants. Roman may hold the title of Prophet now, but that used to belong to Bill's grandfather, and Roman is believed to have ousted the old man through dubious means. This is further complicated by the ill will between Bill and his own father, Frank (Bruce Dern), a deadbeat with multiple wives who still lives at the compound. When Bill tries to pinch Roman financially, Roman can pinch back by striking at his family. Bill's brother Joey (Shawn Doyle) is an ex-drug addict with a tenuous grip on his own life, and his mother (Grace Zabriskie) is a kook with a tenuous grip on her own sanity. Roman is a sinister man, and there's little he won't do to maintain his power. Harry Dean Stanton is, of course, fantastic in the role. He practically slithers across the screen, though not in a showy way. He surveys the goings-on with steely eyes, commanding through the presence of self-belief rather than raised fists.

There's a lot going on in the first season of Big Love, but the creators of the show keep all their boats afloat. The cast is exceptional--I mean, just look at the names. Paxton, Tripplehorn, Sevigny, Dern, Zabriskie: all continue the trend of strong actors reinvigorating their careers through a well-chosen TV vehicle. Goodwin is a revelation, capturing the blunders of youth in the way only an assured observer of human behavior can understand. In fact, the eldest daughter, Sarah (Amanda Seyfried, who was one of the Mean Girls) is probably more mature than Marjene, often providing the woman who is essentially her stepmother with advice.

When the season concludes, most of the plot lines are sewn up, but in true cliffhanger fashion, new wrinkles have developed. I won't spoil what happens, but suffice to say, I have no idea where they are going to take Big Love next, or even how they are going to pull the Henricksons out of the fresh hole that's been dug. The second season premiere can't get here fast enough for me. I really want to know! 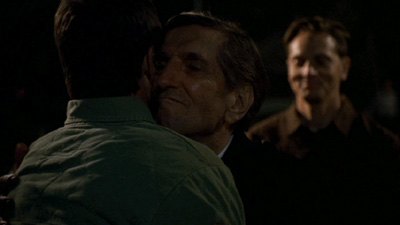 Video:
The first season of Big Love was shot in widescreen and was put on DVD in an anamorphic 16:9 ratio.

Sound:
A 5.1 mix in English, and a Spanish dub in 2.0. There are also English, French, and Spanish subtitles.

Extras:
A twelve-minute program on disc 5 called "Big Love: A Balancing Act on Ice" works as a promotional piece about the whole series while also showing the making of the elaborate opening credits sequence where Bill and his wives ice skate together. The cast and crew are interviewed, but interestingly enough, they never reveal that Bill Paxton doesn't actually ice skate himself. This is only revealed on the commentary track for the final episode of the season, recorded by Jean Tripplehorn, Chloë Sevigny, and Ginnifer Goodwin. The actresses have a strong camaraderie, laughing through the audio track and talking over one another. It's a waste of a commentary, however, because it turns out that none of the actresses had seen the episode before sitting down to record. I don't know whose idea that was, because it means they have very little to say and often let scenes pass without saying anything at all.

There is one other commentary on the set, appearing for episode #5 on DVD 2, the one entitled "The Affair." It's between Paxton and Tripplehorn, and though it's not super detailed, it is far more anecdotal than the commentary for episode #12. Once again, the performers really get along, and the discussion has a quality of two friends hanging out and talking that is inviting.

The discs are held in a sturdy package, with plastic trays put together like a book. The book is then placed in an exterior slipcase.

FINAL THOUGHTS:
Just as with nearly every other show on HBO, Big Love: The Complete First Season can be nothing less than Highly Recommended. A fantastic cast and a smart crew of writers and directors take an ingenious idea for a new kind of family drama and execute it with the utmost of care. Though there are religious and political aspects that could have been hot-button issues, they are instead handled with care. The makers of Big Love never forget that first and foremost, their show is meant to be entertaining. While the concept may be gimmicky, the final result is anything but. Rather Big Love is a gripping serial drama providing viewers with a brand new clan to call their own. 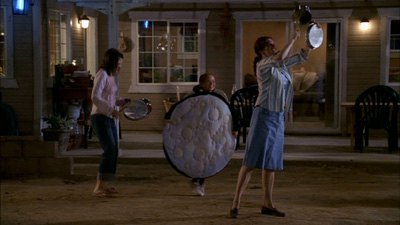