Image // R // October 3, 2006
List Price: $24.99 [Buy now and save at Amazon]
Review by Stuart Galbraith IV | posted October 27, 2006 | E-mail the Author
Not just an important horror film but one of the true "lost films" of the 1970s and a significant piece in African-American cinema, Ganja & Hess (1973) so transcended genre and overall aesthetic expectations that it all but doomed itself to a fate of almost total obscurity for several decades. After slowly finding an appreciative if microscopic cult audience in the 1990s, DVD producer David Kalet did a painstaking restoration of the film in 1998, one of label All Day Entertainment's great triumphs. Three minutes of newly recovered lost footage was reason enough for All Day to reissue the title yet again (as The Complete Edition) with some new extras.

Though it rode the wave of '70s blaxploitation and its sub-genre of horror films, to toss Ganja & Hess in the same category as Blacula (1972) or Abby (1974) would be like lumping 2001 and Solaris into the same pack with Journey to the Seventh Planet and Reptilicus. There's practically nothing to compare Ganja & Hess to in either all of black cinema or the horror genre, and because the film is very much its own animal, audiences often don't quite know what to make of it. Some are floored by its existential script while others are put off by its aggressive if sincere artiness. 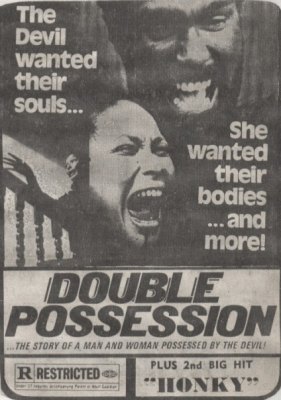 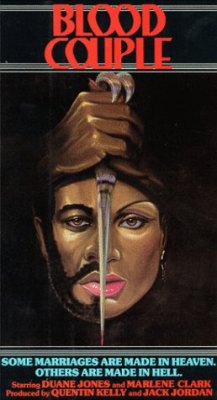 Those who don't like the film are probably turned off by its cryptic opening scenes, which are nearly impenetrable on a first viewing and somewhat pretentious, as if to make plain to audiences that this ain't no Blackenstein. Dr. Hess Green (Duane Jones, the star of George Romero's Night of the Living Dead) is an erudite, wealthy archeologist who hires George (Bill Gunn, who also wrote and directed the film) as his live-in research assistant. The two are complete opposites, George being a talkative boor with bipolar tendencies. He suddenly commits suicide, but not before stabbing his boss with an ancient dagger that essentially turns Hess into a vampire (a term steadfastly avoided in the film). Or maybe not (see below).

George's no-nonsense wife Ganja (Marlene Clark) eventually turns up looking for her estranged husband, not out of concern for him but rather because she's broke and needs his financial support. Pragmatic, she moves in with Hess and eventually they fall in love and get married, even after she uncovers Hess's horrible secret.

Whatever Ganja & Hess is, it's undeniably intelligent, earnest, and extremely well-acted. Indeed, the three principal characters give what are among the best performances ever in a horror film. Though Jones' Hess remains pretty enigmatic and reticent, he leaves a lasting impression, particularly in a long, revelatory scene where Hess visits a Pentecostal church seeking salvation. Indeed, this is one of the film's many inversions of the classic vampire myth - a vampire embracing Christianity rather than being repulsed by it. It also addresses in interesting ways the horror of daily life as a vampire, to be repulsed by one's own addition (both Ganja and Hess are horrified and sickened by their own behavior), to have to kill, to find new ways to dispose of victims

Both Clark and Gunn are so naturalistic and convincing in their performances one wonders just how they achieved what they did, though the frequent use of long takes obviously helped. Gunn did give his actors a great deal of Altman-esque latitude, by all accounts, and at least one scene in the film looks like it was completely improvised.

The film has been described many ways: as a mediation on addiction, as an examination of reawakened African culture conflicted with white-imposed Christianity. One thing's for sure, and that's that Bill Gunn wasn't particularly interested in exposition, cutting most of what little there was in his script during production and the editing phase, leaving the film vague and ambiguous when it isn't outright contradictory. There are scenes that build mood and/or expand on characterization but otherwise have nothing whatsoever to do with story. There are scenes inserted for no clear reason at all, and others so non-linear in their placement Gunn's rational for putting them where he does only becomes clear (sometimes) after multiple viewings. Hess's bloodlust is explained both supernaturally and scientifically; it may have begun when he was researching Myrthian culture in Africa, or perhaps only after George stabs him with the ancient dagger.

Though demanding, the film crams in a veritable flood of ideas: this was Gunn's Big Chance, and he takes full advantage of the opportunity, as if to put a lifetime of art into a single movie. Equally busy are the film's experimental, very impressive and often creepy musical score and sound editing, including an eerie mix of African chanting and what sounds like a giant electric razor every time Hess feels the compulsion to drink human blood.

Ironically, its black, murderous vampires prove better role models in their own way than the misogynistic pimps and ghetto culture on display in movies like Superfly. The film presents its educated black characters - men, women, and teenagers who speak French fluently, listen to a mix of jazz and classical music - matter-of-factly, without comment.

Ganja & Hess's transfer is problematic. Though 16:9 widescreen, the image is very soft, the colors are blah, and there's a fair amount of digital artifacting. This can be attributed to three things: First, the transfer is mostly derived from a 35mm archival print (at least one restored scene utilizes a 16mm print), which can't compete with transfers sourcing original negatives. Secondly, the grungy visual style and inferior film stock so common in '70s American cinema adds to its overall unattractiveness, despite the otherwise superb cinematography by the late James E. Hinton (to whom this DVD is dedicated); and finally the transfer, most of which was mastered back in '98, has problems of its own, notably digital artifacting apparent in some shots of rapid movement (George's scuffle with Hess, hand-held camera shots, etc.) and details the mastering software has trouble reading (eyelids, blades of grass, etc.). In his defense Kalet argues that, given the quality of available elements, that this is about "as good as it possibly can be," which is a fair assessment. The mono soundtrack is fine; there are no subtitle options.

The original DVD release's audio commentary featuring Marlene Clark, producer Chiz Schultz, DP Jim Hinton, and composer Sam Waymon, remains a great extra, with new audio of editor Victor Kanefsky explaining the added scene. The Blood of the Thing, running 29 minutes and in 16:9 enhanced format, offers reflections of the production in newer interviews with, among others, DVD producer Kalet, Schultz and Kanefsky. It's very informative and helps bring the film's convoluted history up to date. (It was released recut and released under myriad titles, including Blood Couple and, most inappropriately, Vampires of Harlem)

Ganja & Hess Reduced is a 17-minute mini-commentary featuring Kalet mostly discussing - with Scorsese-like enthusiasm - the film's opening scenes. Although he insists this should be the very last things viewers will want to look at, it proved a valuable extra in interpreting exactly what's going on in those first few reels. (The film's editor is right though when he says the film really kicks into gear with the arrival of Ganja into the story halfway through.)

Also included is a pretty good photo gallery while its DVD-ROM options include the complete original screenplay by Bill Gunn and an article by Video Watchdog's Tim Lucas.

Ganja & Hess is a film better experienced with no expectations than explained. It's also a difficult film worth the extra effort, a movie like no other. Highly recommended.