That's My Bush! - The Definitive Collection 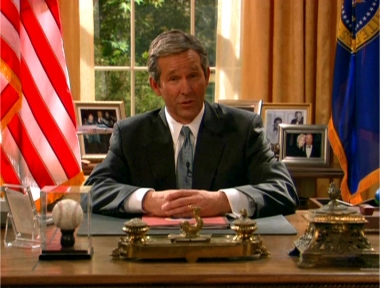 It certainly didn't last long, but Trey Parker and Matt Stone's That's My Bush! (2001) broke new ground in the sitcom genre…by ripping it a new one, basically. Most viewers simply didn't get the joke, unsure whether or not the series was a personal attack on the Bush administration or a mock-sitcom with a political premise. Either way, That's My Bush shouldn't be viewed as a preemptive strike: though it's a well-known fact to fans of the series, Parker and Stone planned to roast whoever won the 2000 election (with Absolutely Al! on the drawing board if Gore won). Though it certainly wasn't the first series to poke fun at politics, the generic sitcom backdrop and over-the-top storylines gave That's My Bush an edge in the comedy department. The entire series only lasted eight episodes, but they certainly made their mark.

For those who only viewed the Comedy Central series as a lazy collection of sitcom clichés…well, that was sort of the point. These clichés give us a foundation to get comfortable with; the real comedy gold comes from the political skewering and surreal, almost kinetic storylines. From "the wacky next-door neighbor" to the "closing catch-phrase" (in this case, the Honeymooners-esque "One of these days, Laura, I'm gonna punch you in the mouth!"), That's My Bush doesn't attempt to hide that the formula isn't anything new and different. Ironically, though, it is---and though most other shows can't quite pull off the balancing act, Parker and Stone's creation is both subtle and subversive with energy to spare. In short: the White House never looked so gray.

As George W. himself, Timothy Bottoms does a great job of anchoring the lead role---and not surprisingly, it wouldn't be the last time he portrayed the President on TV. Supporting cast members include Carrie Dolin (First Lady Laura Bush), Kurt Fuller (Karl Rove), Marcia Wallace (know-it-all maid Maggie Hawley), John D'Aquino (neighbor Larry O'Shea) and more. The cast has great chemistry together---especially considering less than a dozen episodes were made---and give That's My Bush a terrific number of quotable lines, whether they're sharp jabs at the government or otherwise. The humor's only drawback, of course, is that it's rooted deeply in current events and the like---and that's not to say it doesn't ring true five years later, but it doesn't flow quite as well. An unavoidable problem, but a problem nonetheless.

Fans have been waiting patiently for That's My Bush on DVD, and Paramount's two-disc package will only mildly disappoint those spoiled by more lavish TV collections. All eight episodes appear in their original format and broadcast order, from the mildly revolting series premiere ("An Aborted Dinner Date") to the bittersweet end ("Fare Thee Welfare", which wraps the cancelled series up a bit neater than you'd think). It's still a polarizing experience, but fans of Parker and Stone's unflinching humor should find plenty to smile about. Let's take a closer look, shall we? 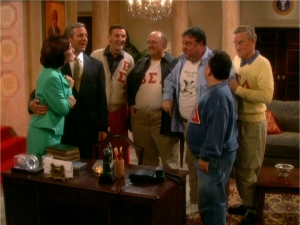 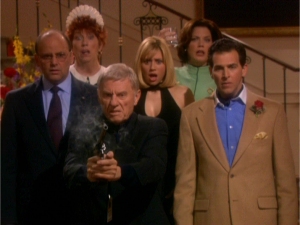 Presented in its original 1.33:1 aspect ratio, That's My Bush looks passable but certainly shows room for improvement. The image is fairly soft, colors are drab and dim lighting creates little in the way of image detail, though the source material is most likely to blame. Additionally, these discs don't seem to be progressively encoded and often suffer from mild ghosting during scenes of action. The English 2.0 Surround mix is basic but gets the job done, boasting clear dialogue and music that stays mostly in the front channels. No optional subtitles have been included, but Closed Captioning has been made available if your setup supports it. 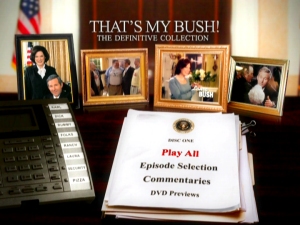 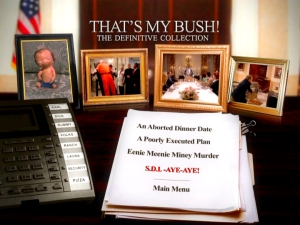 Seen above, the menu designs are basic and practical, allowing for smooth and easy navigation. Each episode has been presented with only three chapter breaks (bypassing each set of credits), while no obvious layer changes were detected during playback. Both discs are housed in clear slim keepcases and tucked inside a slipcover; though only a promotional insert is included, brief episode recaps are printed inside the cases.

Bonus Features
There's not much on paper, but we get a few interesting tidbits: namely, a collection of Mini-Commentaries akin to those found on the South Park season sets. Roughly half of these commentaries feature creators Trey Parker and Matt Stone (33:28 total), while the others herd together actors Kurt Fuller, Marcia Wallace, Timothy Bottoms, Kristen Miller, Carrie Dolin and John D'Aquino (58:45 total). All are at least moderately interesting, though Parker and Stone's comments are a bit more entertaining on the whole. Their thoughts on the shows' creation and brief lifespan are valuable in their own right, but it's their candidness that really helps these brief commentaries shine. The cast tracks are lively enough, but they're obviously more casual and light than technically detailed. Sadly, that's all we get here, save for a few Comedy Central Previews. Even so, most fans of the series should simply be glad to have it on DVD.
Final Thoughts

It's certainly a polarizing experience, but those who like their political satire thick and heavy should get a few chuckles out of That's My Bush. The show's brief lifespan still mines a modest amount of comedy gold, though its potency may have weakened in the last five years. Even so, fans of Parker and Stone who missed this one the first time around will want to give it a look on DVD---and though Paramount's two-disc set doesn't particularly shine in any category (especially since it's dubbed "The Definitive Collection"), it's still a decent package at an affordable price. Recommended.

Randy Miller III is a cartooning instructor and office monkey based in Harrisburg, PA. He also does freelance graphic design projects and works in an art gallery. When he's not doing that, he enjoys slacking off, general debauchery, and writing things in third person.