BCI Eclipse // Unrated // November 7, 2006
List Price: $39.98 [Buy now and save at Amazon]
Review by Stuart Galbraith IV | posted November 13, 2006 | E-mail the Author
Excitement that Ultraman (1966-67) - the seminal Japanese superhero/tokusatsu ("visual effects") TV show of the 1960s - was coming to DVD was severely tempered by problematic, hugely disappointing transfers. Volume Two of this collection, featuring the remaining 19 shows, addresses some of the problems and though the collection is still far from perfect, these issues are less the major distraction that they were before. 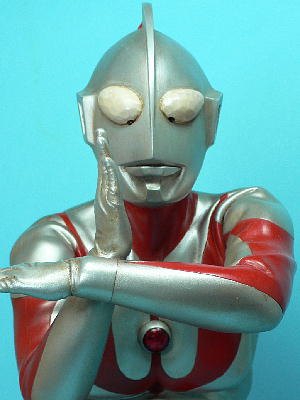 The series is a delight, setting the template for myriad Japanese fantasy shows that followed in its wake, its influence extending to theatrical features as well. (The sensibility of Japan's kaiju eiga of the late-1960s, especially films like Destroy All Monsters and The X from Outer Space, were enormously influenced by Ultraman rather than the other way around.) While Eiji Tsuburaya's artisans strived for an illusion of reality with their intricate miniatures and elaborate optical effects, story- and character-wise, including the monsters and Ultraman himself, realism simply was not a concern.

Indeed, the show was among the first to embrace a kind of alternate 20th century fantasy universe, where present-day life freely interacts with fantastic new technology (the Science Patrol's iconic Jet VTOL/Beetle and laser-guns, for instance), where giant monsters are a part of everyday life, and where bizarre creatures like the benign Pigmon (a blobish, child-sized red carnation of a monster with doll-like eyes and droopy, hamster-like paws) can turn up in a department store's toy department - where Ultraman toys are sold, natch - and be regarded more of a nuisance than a threat. This casual attitude is a big part of the show's appeal, and the earnestness of the cast sells the often outrageous storylines.

Volume Two is more of the same, with episodes in turn typically zeroing in on one member of the Science Patrol, and with many of these later shows referencing earlier stories and monsters, some of whom make return appearances. Though not a Toho series, many of that studio's contract players would turn up here in guest-starring roles, including Yutaka Sada (the chauffeur from High and Low), Senkichi Omura (King Kong vs. Godzilla), Ren Yamamoto (Gojira), Hisaya Ito (the inept assassin in Ghidrah), and Akihiko Hirata (Samurai II, Sanjuro, and countless kaiju eiga).

Beyond the highly imaginative if TV-budget level special effects, other aspects of the show easily ignored are top-notch. Frequent series director Akio Jissoji helmed several highly stylized, almost surreal episodes, while scripts by Tetsuo Kinjo especially show a lot of imagination. Finally, Kunio Miyauchi's score, notably its title and Science Patrol themes, is quite charming and, once heard, hard to get out of your head. 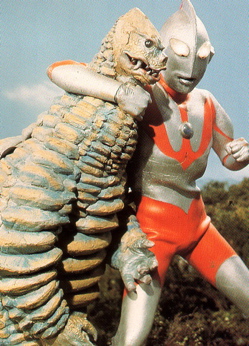 Although BCI/Golden Media Group's Ultraman - Series One feature English subtitled versions of essentially uncut episodes, the alternate English-dubbed audio tracks are incomplete, and missing English audio meant that characters would be speaking English one minute, then dialogue would abruptly slip into Nihongo and back again. The booklet included with Volume Two states that "before Ultraman aired on television in the U.S., the show was cut to fill a specific time slot and the English audio dubbing was created for this newly edited version." In fact the reverse was true: the show was edited-down by local channels long after the English dubbing was completed. After original U.S. distributor United Artists Television's rights expired, the complete English-dubbed audio masters were returned to Tsuburaya Productions.

Worse, the video and audio transfers for both volumes are substandard; on Volume One especially, the video is downright headache-inducing. Though fairly sharp, all movement is severely pixilated: characters would walk across the room with robot-like jerkiness, while the monster battles jittered like crude stop-motion animation, so distracting was this transferring snafu. (You can read John Sinnott's review of Volume 1 here.)

BCI took a lot of well-deserved heat for these poor transfers, though they were only partly to blame. The problem is rooted in a nasty, decade-long legal battle over distribution rights between Tsuburaya Productions, the Japanese production company that produced Ultraman, and a Thai firm called Chaiyo Productions.

Back in the mid-1970s, when the two companies were on friendlier terms and had teamed up for several co-productions, Chaiyo founder Sompote Saengduenchai claims Tsuburaya Productions president Noboru Tsuburaya (son of SPFX pioneer Eiji) sold him virtually all worldwide rights (outside Japan) to Ultraman and its spin-offs (Ultra Seven, etc.) produced up to that point in exchange for a monetary loan. Tsuburaya Productions, on the other hand, claim the contract Saengduenchai suddenly produced in the 1990s was nothing more than a blatant forgery. Nevertheless, both Japanese and Thai courts ruled in favor of Chaiyo.

The case seems to have hinged largely on the fact that the alleged contract bears Tsuburaya's official company stamp. Tsuburaya's position apparently is that the document itself is a forgery while they begrudgingly acknowledge that the company seal on it might be genuine. Though business hanko, as such stamps are called, are normally kept under lock and key, Tsuburaya reportedly gave Saengduenchai free reign at the company's Setagaya studio and some have suggested the Thai producer nicked the hanko when his Japanese partners weren't looking. Others argue that the seal is also a forgery.

Though BCI has stated publicly that they would have preferred to have dealt with Tsuburaya Productions directly, in the eyes of the Japanese and Thai courts home video rights to Ultraman clearly rested with Chaiyo Productions, and so it was through them that the show was licensed. However, all the original film and audio elements and digital masters are still owned by and reside with Tsuburaya Productions. Tsuburaya claims BCI and/or Chaiyo has to date never contacted them about accessing masters, while BCI has at least suggested they were denied access to Tsuburaya's elements.

This case is extremely unusual. Tsuburaya is currently appealing the ruling against them in the Japanese courts (a case is likewise pending in China), which would justify their refusal to release original elements or clones to Chaiyo for now. However, if the ruling is upheld and their legal options become exhausted, it would be unreasonable on Tsuburaya's part not to provide Chaiyo and/or their licensees access even if all of Tsuburaya's claims are true. When rights are split between multiple distributors it's common practice for the holder of the film elements to provide these other firms access or, more commonly, clones of their masters at cost with perhaps a nominal access fee.

Because of this ongoing problem, Chaiyo had to come up with masters on its own, and those they provided BCI with were inexcusably poor. Because Chaiyo's own elements were limited to battered 16mm prints, they essentially swiped the video and audio directly from store-bought Region 2 Japan DVDs distributed by Panasonic, and the pixilation problem apparently is related to the process of creating new masters from these commercial DVDs.

For their part BCI should have flatly refused to accept them. Contractually Chaiyo would have been responsible for delivering acceptable masters and clearly these weren't. Needless to say, Chaiyo didn't exactly ask Panasonic if it was okay that they use their masters, while BCI's trumpeting this "re-mastered version" with its "stereo sound and brilliant color" is rather distasteful considering they neither paid for this work nor had anything to do with it anymore than Chaiyo did.

The good news is that while some of these issues persist in Ultraman - Series One, Volume Two, the pixilation problem has been greatly reduced while the transfers have improved in other areas. Now, for instance, the English version of the theme song is heard over the opening credits on the English track (twice actually, to match the running time of the Japanese credits): on Volume One, the Japanese version of the theme song, unsubtitled, played over the credits. However, there's still English audio missing from episodes, emphasized by the fact that the mono English audio, probably culled from bootlegged VHS tapes, is frequently very poor while the Japanese soundtrack is crystal clear and remixed for Dolby Stereo. (It would have been less jarring if everything had been mixed mono.) Episodes still abruptly end without credits or promos for the next episode.

It's really a great shame this and other "Ultra" series are mired in such a legal quagmire with resentment all around. BCI's packaging is quite nice. Volume Two comes with another useful eight-page, full color booklet featuring a good episode guide and essay by Denny Azumabashi and Montey Yamazaki. Kids will like the two collectible cards featuring Ultraman's foes and a Kaiju Encyclopedia offering details on the show's various monsters.

Ultraman is a series fans have wanted to see again, especially in its original form, literally for decades. It's unfortunate then that forces beyond the control of its American distributors, indeed beyond all the might and technology of the Science Patrol, have so severely compromised these releases. For the foreseeable future, unfortunately, this is as good as it's going to get. Serious flaws and all, it still comes Recommended.