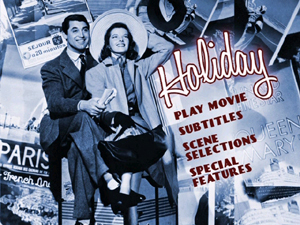 Cary Grant and Katharine Hepburn made an excellent movie duo. Both had distinct personalities, with their own way of speaking and carrying themselves. It's impossible to mistake them for anyone else, or anyone for them. Their fame and legend is down to how well they managed the Grant and Hepburn brands, playing roles either together or apart that celebrated their independent spirits.

Holiday, the 1938 adaptation of the Philip Barry stage play, is the third movie that the pair made together, and the second with George Cukor. It was nearly Hepburn's last, coming around the time when she was infamously declared "box office poison." Two years later she and Grant and Cukor would team again in the film that would turn it all around, The Philadelphia Story, also based on a play by Barry. (Adding to the lineage, the screenplays for both movies were written by Donald Ogden Stewart.) Holiday doesn't quite hit the heights that film would, but there for the grace of The Philadelphia Story goes Holiday. It's a classic tale of class and romance in its own right.

Cary Grant plays Johnny Case, a self-made man whose career in finance is only the springboard for his true dreams: he wants to earn enough money to live a life of carefree travel. He wants to experience the world while he is young and return to work later, when he has figured out what he is working for. On the first ever vacation of his life, he met Julia (Doris Nolan, One Hour to Live), a heck of girl that has smitten him so, he has asked her to marry him after ten days. Only, he has neglected to ask anything else about her.

Imagine his surprise when he discovers that she is Julia Seton of the New York Setons, one of America's sixty wealthiest families. It's a bittersweet twist for Johnny, because he wants to earn his own money--a quaint little idea in Julia's circle. Dreams aren't every really pursued at that level of society, they are too close to bother reaching for. Hence, Julia's brother Ned (Lew Ayres, best known for the Dr. Kildare series of films), who could have been a fine musician if he wasn't being sensible and managing daddy's money. The price for this sell-out? A bottle of Scotch.

Then there is Linda, as played by Katharine Hepburn. She's the self-described black sheep of the family. Hip to the plight of her kind, she does the only sensible thing and gives up. Rather than try anything that might matter, she spends all of her time in their childhood playroom wondering what it would be like to live the kind of life Johnny imagines for himself. Thus, when he enters their gigantic home (complete with elevator), he's a reinvigorating breath of fresh air for Linda. Johnny is proof that you don't have to be tied down. She instantly sees the value of his plan, but she's not convinced anyone else will. 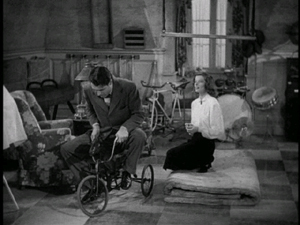 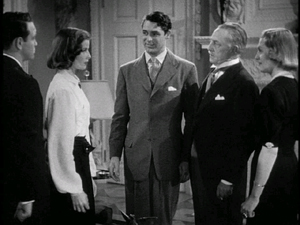 This all sounds like rather serious stuff, and for the most part, it is. It's not as dowdy with import as, say, Eugene O'Neill, but it's also not the frothy comedy presented on the box art. There are serious issues of class and desire and what it means to love another person, and long stretches of the movie are given over to real discussions of the problems between Johnny, the Seton offspring, and their controlling father. Hearts are broken over these things, and by the end, there are some shards on the floor.

And yet, Barry and Cukor also keep in mind that this is a film about people falling in love, and that if Johnny and Linda really want the life of fun and frolic they talk about, there is plenty of room between the heavy discussions to indulge in the considerable charisma of the two lead actors. Naturally, with Grant and Hepburn as the names above the title, they are going to be the ones who really fall in love. Johnny's philosophy of life is summed up through acrobatics. If things get too drastic, do a somersault. Cary Grant was trained in stage gymnastics as a young actor, and those skills come to good use in Holiday. The scene where Linda and Johnny show off the stunt he taught her is a rightful classic. You'll be delighted to see them tumble across the floor, and even moreso when a similar trick punctuates the picture. The scenes the duo has alone or with the Johnny Case Club--Ned and the Potters, a delightful scholarly couple Johnny is friends with (played by character actors Edward Everett Horton and Jean Dixon)--are grand fun. Additionally, when the romance gets romantic, you will swoon. The smoldering desires that pass between Grant and Hepburn during a New Year's Eve waltz are all you need to see to know who Johnny Case should really marry.

So, don't mistake Holiday for predictable holiday fluff, but don't worry about being bogged down in the social drama, either. Instead, expect a true romance, with moments of intensity and giddiness in equal measure. If you've ever enjoyed Katharine Hepburn and Cary Grant together before, Holiday sits comfortably amongst their other triumphs. I swear, it doesn't matter how many times I see them fall in love on my TV screen, they get straight to my sappy old heart every time.

Video:
The DVD of Holiday shows the film at full frame film in a 1.33:1 aspect ratio. It's not the sharpest picture compared to other restorations of recent memory, but it's passable. There were no glaring glitches or dirty scenes, just the occasional softness of image.

This is essentially the same disc that was in the previously released Cary Grant Box Set, so no need to double-dip if you already have that.

Extras:
A short, seven-minute documentary discusses the formative years Cary Grant spent at Columbia Pictures, working as a gun for hire on the movies that make up the boxed set that Holiday was part of prior to this single release.

There is also a two-minute look at an alternate opening created for the film, with Cary Grant and Doris Nolan meeting on their holiday in Lake Placid. Since the footage no longer exists, it is shown through photos from the set.

A handful of trailers are included.

FINAL THOUGHTS:
I'm a sucker for Cary Grant, and I'm a sucker for Katharine Hepburn, and when you put the two together, forget about it. I'm all the way in. Holiday is a fine example of their chemistry, and is Highly Recommended for putting to use everything that made them such a winning pair. Romance, drama, comedy--it's all here, and the two move from one to the other with unparalleled grace. For the ninety minutes you watch this film, you'll feel like you're on holiday yourself, free from what ails you. 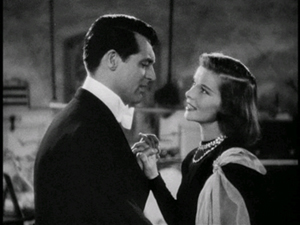