Universal // PG-13 // November 14, 2006
List Price: $29.98 [Buy now and save at Amazon]
Review by Don Houston | posted November 20, 2006 | E-mail the Author
Background: College means different things to different people. For some, it means getting a better job while for others it means an extension of their partying days on their parent's dime. Having spent a considerable amount of time in institutions (of higher learning, smarty!), I've met all the stereotypes you see in movies and television shows; typically a mixture of several real personalities though many I've met based their personas in characters they saw in popular culture media outings but I'll pass on deciphering which came first (chicken and the egg discussions are best suited for another format). The popularity of movies based on the so-called college experience runs pretty high though, especially with a certain male demographic that are willing to overlook gaping plot holes, poor acting, and all the issues associated with the genre, with the rare title proving worthy of your time & money. Today's review is on a movie released by the "studio that brought you American Pie, a rough little gem called Accepted, that sugarcoats many of the usual standards of the format, almost to the point of absurdity.

Movie: Accepted is the story of Bartleby Gaines (Justin Long); a high school senior that engages in various criminal enterprises in order to fund his various monetary needs. As one of the go to guys about town, a hustler in the purest form of the word, he sails through life on a combination of playing the odds, figuring out the loopholes, and catering to the baser elements in life. In reality, he'd either end up a pimp, a porn producer, or dead in a ditch, or all three depending on his run of luck holding out. Well, his clueless parents kind of expect him to go to college, even while realizing that their youngest daughter is the one with all the brains in the family. They haven't really paid much attention to him but they have to keep up with the neighbors so they figure Bartleby will do what any of his peers worth a spit will do and get an education unlike the previous four years in high school. The catch is that Bartleby's talents for lying and scamming have left the colleges he's applied for somewhat unimpressed so all he has for his admittedly limited efforts are a bunch of rejection letters from even the lamest of schools. 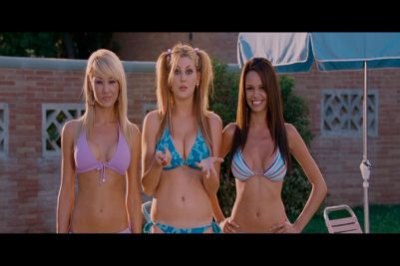 This was as risqué as the movie got, sadly enough.

On a lark to keep the old man off his back, Bartleby uses a friend's acceptance letter to a nearby college as the template for making up a similar school but in this day and age, he has to invent a website for the parents to visit. He employs a nerdy friend of his Sherman Schrader (Jonah Hill); a guy that combines John Lovitz's character from The Critic with Animal House's Flounder, and a significant amount of brains and cowardice, to work one up for him in record time using general platitudes and heavy borrowing from the school he's going to, Harmon School of Technology; a relatively exclusive school. This convinces his parents just enough to give Bartleby his first semester's check for ten grand, but also opens up a can of worms that I'll get to. Dad still wants to meet the dean of the college and Bartleby is too much of a loser to cut his losses and fess up so he and a group of his friends rent a broken down old mental hospital and start to clean it up, hiring a burnout professor turned shoe salesman to play the role (Lewis Black in another scene stealing role).

Well, each of the group tell their parents the same thing; they are going to South Harmon, the "sister school of prestigious Harmon". Bartleby's parents securely out of the picture for the moment, the following day has hundreds of other losers showing up to start their education, having been accepted by the website that defaulted to letting anyone who applied into the program. Each time Bartleby is confronted with the prospect of jail or a mob that would tear him apart for scamming them, he builds further onto the lie, even misleading the woman he loves into dropping out of the real college and joining his institution. The movie's flimsiest of premises reminds one of the lies that Bartleby tells to get through life, passable on first glance but upon the slightest bit of inquiry falling apart. 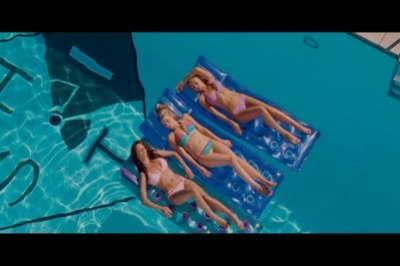 The women were under utilized.

So, not having a curriculum, a teaching staff, most modern facilities required by a college, the gimmick is how to stay afloat and one step ahead of all those who would shut him down; particularly in the form of the real Harmon authorities once they stumble onto the scam almost by accident. All the needed elements of a college comedy are present in liberal amounts; a rival fraternity full of stuffed shirts, the eventual arrival of the police, and a wide variety of jokes that range from sight gags to slapstick humor as the leads are put through the generic paces by freshmen director Steve Pink (the writer of Gross Point Blank, High Fidelity, and a few other choice comedies). Like Bartleby's lies, the movie works best if you're extremely forgiving of the paper thin material and can accept that it was purposely watered down to obtain a PG-13 rating (even bleeping to keep from losing it to an R). 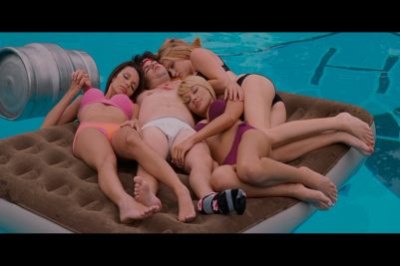 Adam got all the ladies in the movie.

It was well meaning enough and should have gone the direct to video route given how weak so much of the material was but the included trailer and credentials of the producers were enough for a minor success in theatres. My biggest problem outside of the writing (and largely weak acting) was how unsympathetic the characters were, especially Justin Long as Bartleby. If embracing a snake that would sell you down the river for momentary gain works for you, he'll be right up your alley but his attitude of being smarter then everyone and confidence in his ability to cheat his way out of any situation (regardless of the cost to those around him) grated on my nerves more than a little. In the end, he wasn't trying to do the right thing (like most morality plays, this is the only way to redeem the character) but still trying to cheat his way out of the consequences with a series of rationalizations that defied logic. There were numerous goofs, plot holes, and assorted problems with the movie that made me initially think it was self financed on a shoe string budget, using relative unknowns and by calling in favors. Still, it had just enough going for it that I think fans of the genre, if totally wasted and/or drunk, might consider it as a mid week Rent It when all the better movies (and we're talking hundreds and hundreds of thematically similar titles) have all left the local Blockbuster.

Accepted, then, was acceptable to the chief demographic it catered to; white males under 18 that possess the kind of power fantasy that lets them think they can beat the system by luck and perseverance rather then applying hard work and talent. Sadly enough, the DVD extras were better then the movie itself, always a bad sign for this reviewer but at least enough to broaden the appeal to the kind of hardcore movie buff that watches (and listens) to such features. Check it out if you fall into said demographic but don't expect a whole lot or you're going to be disappointed at how watered down a good idea this could have been. 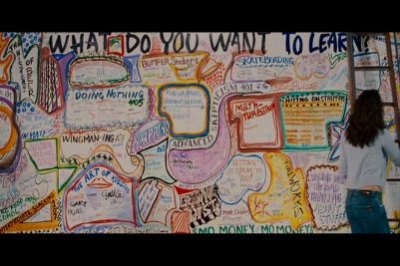 This was the curriculum board.

Picture: Accepted was presented in the same 2.35:1 ratio anamorphic widescreen offering it was shot in by director Steve Pink. As a recently released flick, it looked pretty sharp with solid fleshtones, decent lighting, and only minor issues in regards to edge enhancement or compression artifacts. If you watch it sober and pay attention, you'll find scores of technical errors like mikes slipping into view, continuity errors, and other issues that some people care about. It looked pretty good overall and this was not one of the areas in need of repair.

Sound: The audio was presented with a choice of either English, French or Spanish in a 5.1 Dolby Digital Surround with optional subtitles in each of those languages. I listened to the English language track and found there to be relatively little separation between the channels except for the music and the dynamic range was consistent with a new release on a major label as a budget title. By and large, the audio was nothing special but also didn't get in the way of the movie. 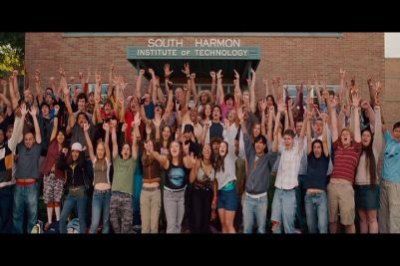 Group shot of the students of S.H.I.T.

Extras: The selection of extras was actually pretty solid this time, another case where the extras clearly outshined the main feature. They started off with an 11 minute feature called Adam's Accepted Chronicles where the actor for one of the lead characters, a spaz named Glen (Adam Herschman), is allowed to provide a mockumentary of his role with the help of some of the others in the movie. Had the movie shown as much creativity and humor, I'd have loved it so it's sad that secondary features were where the talents went this time. The same could be said for the 10 minute long Reject Rejection: The Making of Accepted feature where the cast and crew goofed around a lot. This was followed by a self guided tour of the campus that is mostly a selection of short clips of the making of the movie focused on those areas. That led into two music videos; Hangin on the Half Pipe, and Keepin' Your Head Up by The Ringers; the former a skateboarder bit and the latter a bunch of bits from the movie. Next up was a director's audio commentary with director Steve Pink and actors Justin Long, Lewis Black, Jonah Hill, and Adam Herschman. I listened to it while writing this review and found it to have more of interest to me but I wished that some of the creativity and energy going into it was applied on the movie instead. There were then 13 minutes of deleted scenes of various merit (chopped for a reason in most cases), an 8 minute gag reel presented by Volkswagon (don't ask), a section of movie music MP3's, and a short easter Egg at the bottom right hand corner for an extended version of the hazing incident on the college green with Jonah, Justin, and Blake Lively.

Final Thoughts: Accepted wasn't the worst movie about college that I've ever seen but it was far from the best too. The acting was on par with any of the aforementioned American Pie movies and the production values were okay for a lower budget movie with third tier actors. The limitations of catering to a PG-13 audience aside, the whole movie seemed to bounce between fair, decent, and weak moments with far too many provided on the lower end of the scale. If you set your sights low enough, Accepted might prove to be worth a viewing or two, especially for the extras, but I didn't think it would have been taken off academic probation with anything higher than a C- (at best) given the overall picture.