Other // Unrated // November 11, 2006 // Region 2
List Price: $20.99 [Buy now and save at Xploitedcinema]
Review by Svet Atanasov | posted December 8, 2006 | E-mail the Author
The Film:
With 2007 shaping out to be quite a year for fans of legendary Italian director Pier Paolo Pasolini (French juggernaut Studio Canal together with UK distrib Optimum have announced a massive boxset of early Pasolini works that will include the much anticipated Accattone! and Criterion are now set to re-release the scandalous Salo) I decided to track down and promote a rather unknown in the US film by Brunello Rondi and Paolo Heusch titled Una Vita Violenta a.k.a Violent Life (1962) based on a controversial story by the maestro himself. 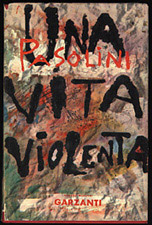 Set in post-war Italy Violent Life chronicles the deeds of young Tommaso (Franco Citti, Il Decameron), a reckless hoodlum, who spends his time on the streets of Rome. Flirting with both the Fascists and the Communists Tommaso unexpectedly falls in love with the beautiful Irene (Serena Vergano, Al Ponerse el Sol). His life takes an unusual turn.

"Snubbed by almost all Pasolini scholars" (Alberto Pezzotta) Violent Life is certainly a strange hybrid of a film. Directed by Brunello Rondi, a man who was often involved with Rossellini as his scriptwriter, and Paolo Heusch, probably best known for his notable contribution to Tinto Brass' Caligula (1979), this controversial Italian film reveals a rough and in my opinion very provocative storyline that successfully rivals that of Mamma Roma (1962). The heavy social overtones, the focus on the slums of Rome with its disillusioned working class, the staggering camera work, the flawed protagonists, there is plenty in Violent Life that immediately suggests Pasolini's influence.

The big issue Italian critics had with Violent Life upon its release in 1962 was its faithfulness to Pasolini's novel which the film uses as an inspiration (ironically the novel itself was a subject of heavy criticism due to its vulgar language). After the initial screenings the press remained rather cold and it seemed like Violent Life wasn't going to generate the success its creators hoped for.

Pasolini's close affiliation with the Communist Party also did not sit well with the more vocal of critics and many prematurely concluded that Violent Life was nothing more than yet another attempt to propagandize the need for revolutionary action (pay close attention to the terrible hospital conditions shown here as they were a heated topic for discussions). As a result Paolo Heusch and Brundello Rondi's film was quickly forgotten.

Fortunately enough in recent years with the launching of the Minerva Classic series, fittingly labeled as A Memoria del Cinema Italiano, film aficionados were given the opportunity to revisit many classic Italian pictures that I certainly thought will never see the light of day. With the restoration of Violent Life it appears that yet another controversial fragment from Pasolini's legacy is now waiting to be discovered.

This is the fourth disc I have acquired from Italian distribs Minerva and to be honest with you I am simply overwhelmed. The restoration work Violent Life has undergone is absolutely stunning. The film is presented in its original 1.33:1 aspect ratio and looks as if it was completed just a few months ago: deep and lush black and white colors, outstanding degree of contrast, remarkable detail, a crisp progressive transfer. I have never seen this film shown in theaters but I can hardly imagine that upon its release back in 1962 Violent Life looked this good. I could not spot any dirt or occasional specs either and from start to finish this Italian disc looked absolutely breathtaking. Really, there is absolutely nothing more that I need to discuss in this section, this is a top job! PAL-encoded, Region 2.

The disc offers a fully restored Italian mono track with optional English subtitles. As you might have already guessed the audio is just as impressive as the video presentation: crystal clear and easy to follow dialog is what we have here. I could not detect anything to possibly complain about. Another superb job! Lastly the English subtitles (proper white font) are incredibly well done and there weren't any syntax errors to report.

In addition to the theatrical trailer this Italian disc offers three English subtitled interviews: one with actress Serena Vergano, one with Italian scholar and journalist Umberto Rondi, and one interview with film director Luciano Emmer (there is also a full blown film commentary with Umberto Rondi which is in Italian only). All three interviews provide a tremendous panorama of notes, recollections, and opinions on why the film suffered the fate it did and what precisely was Pasolini's attitude towards it. The interview by Luciano Emmer is arguably the best one as he goes into great detail explaining the similarities between Violent Life and some of Pasolini's other works. The historic analysis provided is fabulous.
Finally, this marvelous disc comes with an excellent 20-page booklet with a terrific introduction by Alberto Pezzotta, entirely in English, which dissects the work of Pasolini perfectly. There is also a second anthology (essay) and a biography section complimented with numerous large photographs.

I said it in previous reviews and I will say it again: each of the Minerva-produced discs that reached me in the last couple of months has been absolutely outstanding. Entirely English-friendly, with marvelously restored prints, and of course exceptional classic Italian films unavailable on the US market. The Classic Collection by Minerva is a no-brainer folks!!