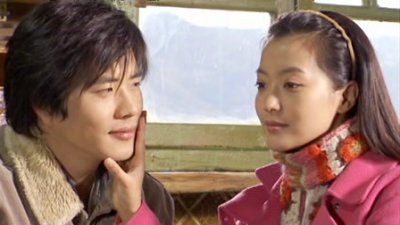 Sad Love Story, also known as Sad Love Song, is a somber romantic drama about two people who are in love and the trials they go through to be together. The story is overly melodramatic with lots of soapy moments and over-the-top elements that make this K-drama great for those who enjoy this kind of television. What sets this particular love story apart from others is that the leading female is blind. In twenty hour long episodes, Sad Love Story details two lovebirds trying to twist fate and stay together, despite all of the obstacles life throws at them, including another person who the leading female falls for.

Suh Joon-young (Kwon Sang-Woo) is a charming, good looking guy who has his sights on one girl, Park Hae-in (Kim Hee-Sun). From an early age, he fell in love with her. All of his life, he has been tormented by his peers, because of his mother's occupation and not having a father. His mother, Hyang-ja, manages Club Savoy, which is a club/bar that caters to the entertainment needs of American soldiers. Hae-in lost her parents when she was very little. She comes to Joon-young's town with her aunt, who sings at clubs and has a gambling problem. Hae-in is blind, but gifted in many other arenas. The other leading role is Lee Gun-woo (Yeon Jung-Hoon). He is someone who finds his way into Joon-young and Hae-in's lives, adding a love triangle to the drama.

The series begins with the two love birds Joon-young and Hae-in being introduced to each other as children. Their first meeting starts off rocky. Joon-young is beat up by a bully named Min-ho and his friends. Off to the side, Hae-in watches, or so he thinks. He throws a shoe at her for watching, and he is surprised when she does not move from the projectile. Later, Joon-young learns that Hae-in is blind. From this point, he feels remorse and befriends her. Quickly, the two children become best friends and eventually fall in love. Meanwhile, one of their peers Hwa-jung has had her eye on Joon-young and takes Hae-in as a threat. Over the years, she does what she can to steal him. 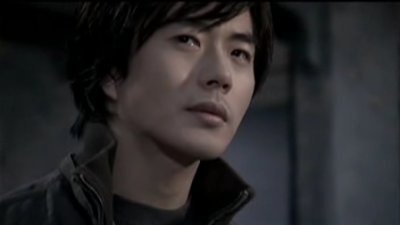 After the childhood episode, the story moves into the characters' young adult life, senior year in high school. This is when the lovers are separated and their love is put through the first trial. Min-ho, who has picked on Joon-young since he was little, has always hated him. He continues to try to torment him. Mainly because the girl he likes, Hwa-jung, has a thing for Joon-young. He decides to get back at Joon-young by striking where it hurts the most, Hae-in. One day, he and his buddies snatch Hae-in from under Joon-young's nose. They beat her and try to rape her. Joon-young chases after and saves Hae-in.

The matter is complicated, because Hae-in and Joon-young are considered at fault. In order to avoid assault charges, Joon-young's mother pays off the other boys' families and sends Hae-in and her aunt away. Joon-young responds by kicking the crap out of the bullies (only Min-ho was hospitalized in the original fight) and he is arrested. Joon-young is sent to live with his father in Seoul. While in Seoul, Joon-young met Gun-woo and they became best friends. As for his relationship with, Hae-in, he eventually finds her again. But matters are again complicated when Hae-in's aunt accepts a marriage proposal from an American soldier who is expected to return to the states soon. The love birds are separated again and must hope they will find each other again.

Life becomes even more complex for both Joon-young and Hae-in. Gun-woo becomes a threat to their relationship without even knowing it. He goes to study aboard for college. He meets Hae-in and falls madly in love with her. The two never connect boyfriend and best friend as the same person because they know Joon-young by different names (Joon-young took his father's name when he moved in with him). Complicating matters further, Joon-young and Hae-in are separated further when someone misinforms Hae-in about Joon-young's death. Without him around, she falls for Gun-woo. As the story continues, the drama unfolds a rollercoaster of emotions with a complicated love triangle. 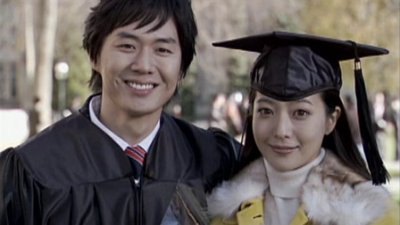 What works for Sad Love Story is pure and simple, the drama. Sad Love Story is based upon a rather simple concept (common to every K-drama I have seen) a love triangle and despite the simplicity of the basis of the story, it is played out very well. The drama that comes from the storyline tends to be engaging and will leave you wanting to know what happens next. On the flipside, the drama is very soapy, to the point some of the situations seem a little too over-the-top and unbelievable. Yet, as mentioned, the story is still played out well and will keep your attention.

Another strong aspect of this series is the leading roles. Kwon Sang-Woo gives his character passion and has great chemistry with the leading female Kim Hee-Sun. Kim handles her role well; her performance as a blind person is convincing. She also makes for a very sweet character, almost too perfect for her role as someone who is conflicted with two loves. Yeon Jung-Hoon does not provide a character as strong as Kwon or Kim, but he fits into his role with the other characters fairly well.

Overall, Sad Love Story is an over-the-top, soapy, melodramatic Korean television series that is perfect for those who enough this type of production. The story is somber and sad, with several likeable and loveable characters and topnotch performances. In the end, this was not my favorite K-drama, but it was entertaining enough that I had a hard time putting it down. 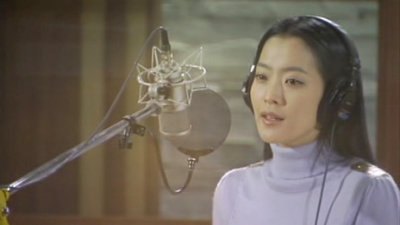 
Video:
This release is given in a letterbox 1.78:1 ratio widescreen color format. The picture quality is very good, providing a clear and clean picture with minor color distortions and compression artifacts. Both dark and bright colors are generally represented well.

Audio:
The audio track supplied is in Korean 2.0 Dolby digital stereo sound. The dialogue comes off a little flat and some of the soft spoken actors/actresses are a bit hard to hear. But the track is generally audible for most characters. The music sounds good; it is dynamic and vibrant.

For non-spoken language options, there are subtitles in English provided. There are a few grammatical errors and odd word usage, but for the most part the subtitles provided dialogue that was very easy to follow.

Final Thoughts:
Sad Love Story is a Korean television drama about two individuals who were in love with each other from childhood and a third person who comes between them, as well as many unexpected events. The story is based on a simple concept, but it is played out very well. The acting performances are also nicely done with lots of over-the-top, soapy melodrama. As an overall series, it is engaging and entertaining.