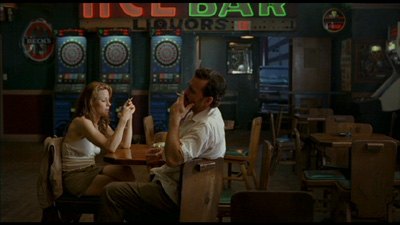 Watching Matt Dillon walk across a desolate city backstreet as the hulking Hank Chinaski early in Factotum, I was struck by the realization that this is the type of guy we see every day. Here in the city, there are multitudes of Hanks, all trodding along in an existence that most of us will never see. I've wondered before what these men (and women) do with their time, where they go. These are people who, by outward appearances, look like they could be right in the middle, just about as average as can be, and yet, maybe they aren't. They are people who know things and see things others don't, who can tell you every bar that is around every corner. Stop one of them some time and ask. I bet you there is a watering hole in your neighborhood that you never knew about.

I'm not overly romanticizing this. I know that very few people out and about on a given day have the soul of a poet, and it takes just such a soul to pull aside the barriers and show the rest of us what we're not privy to. Charles Bukowski is such a person, and his novel Factotum was enough about his life that it's a book we can feel comfortable tagging as "thinly veiled autobiography." The literal meaning of the word "factotum" is "an employee or assistant who serves in a wide range of capacities." Bukowski employs it ironically, and so does Norwegian director Bent Hamer (Kitchen Stories) in his adaptation of the book for the screen.

Dillon plays Bukowski's avatar, Chinaski, as a man who travels through life like sap running down a tree. He's going to take his time getting to the bottom, bending to the curves that the landscape throws at him. He writes short stories and poems as his passion, and he only works to sustain his considerable drinking habit. This, of course, means he doesn't maintain any one job for very long, and the endless parade of demeaning positions he holds is Hamer's meat. There is no grand plot structure to Factotum, it merely trundles forward in an alternating job/no job pattern. The workplace changes, as does Chinaski's women (the main ones are played by Marisa Tomei and Lili Taylor, both coming off as comfortable wandering through the gauze of an alcoholic life), but the experience of living doesn't.

Only the curse of being a writer can make the drudgery of everyday employment harder to stomach for Chinaski than the guys who can keep a job. He's all too aware of the pointlessness of the grind, and his inevitable dismissal from any given position usually comes when he can't keep his peace about the indignity any longer. This means we are witness to many spectacular monologues as Chinaski lets his employer know exactly why the whole idea of a working class system is inhumane.

There is an odd, yet involving, rhythm to Hamer's movie. He enjoys the quirkiness of people and their surroundings, and so he's perfectly suited to take us into dive bars, pickle factories, and dingy hotels. At the racetrack, Hank and his girlfriend Jan (Taylor) grab a drink in the dilapidated restaurant, and Hamer can't resist a long shot that shows the emptiness of the café as well as the odd decoration. Right above their heads are three mariachi iguanas providing an unheard soundtrack. Is it a party for the sinking or a steadfast resistance to doom?

Based on the ending, I'd say the latter. In the final of his many voiceovers, taken straight from Bukowski's writing, Chinaski speaks of the virtues of sticking to it. The message of the film is to stand by who you are and bite into whatever you choose with all your teeth, even if what you choose to be is a drunken layabout. Hamer doesn't try to whitewash Bukowski. He shows him for all his faults, including smacking Jan around and arguing with his father. The only real misstep is an attempt to inject a bittersweet irony into the ending (something I also had a problem with on my first viewing, when I reviewed the theatrical release; outside of that, the film holds up to a repeat spin). Otherwise, Hamer and Dillon have captured Bukowski/Chinaski and all of his gruff charm. You root for the guy even when he is a total creep because he does try, he does stand up for himself, and he holds no illusions about who he is. In one of the finer scenes in the film, in what may be the real emotional climax, when Hank goes to collect a severance check, he tells his ex-boss he needs it to go get drunk. "It may not be noble," he says, "but it's my choice."

Certainly there are worse philosophies to hang a movie on. 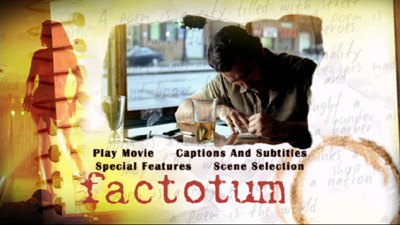 Video:
The Factotum DVD is in widescreen at the original aspect ratio. The picture is passable, neither great nor horrible. It does gain some noticeably soft edges and colors in darker scenes, but the whole thing is pretty much average.

Extras:
The making-of documentary is actually a half-hour program from Norwegian television that serves as much as a Bent Hamer profile as it does a behind-the-scenes featurette abut Factotum. There is plenty of on-set footage, including some deleted scenes, but what you'll walk away with is a better idea of who Hamer is than you will a sense of how this movie was made. Which isn't a bad thing at all.

There is a thirty-second commercial for the Factotum soundtrack and the original theatrical trailer, as well.

FINAL THOUGHTS:
Recommended. The lumbering pace of Charles Bukowski comes through in Factotum. Matt Dillon embodies the alcoholic writer as he trudges from job to job, woman to woman, bar to bar. Norwegian director Bent Hamer captures the common man wisdom and the existential defiance that has made Bukowski's work endure, and in so doing, has made an individual picture that sympathetically shows the audience a side of life rarely talked about. At first glance, you might think it doesn't add up to much, but then neither does living. 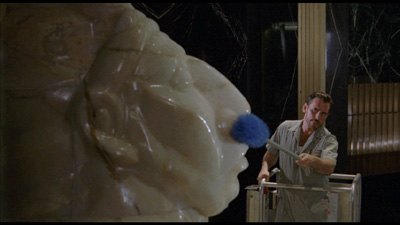