Released within a year of one another, director Akira Kurosawa's entertaining Yojimbo (1961) and Sanjuro (1962) represented a new height in popularity for the prolific storyteller. Kurosawa had earned worldwide acclaim roughly a decade earlier for Rashomon (1950) and continued his success with films like Ikiru (1952), Seven Samurai (1952), Throne of Blood (1957) and The Hidden Fortress (1958), yet the initial release of Yojimbo managed to change Japanese cinema in more ways than one. Spinning a web of drama, violence, betrayal and black comedy into a pair of potent packages---carried much of the way by leading man Toshiro Mifune, who stars as the quasi-nameless Sanjuro ("thirty-something")---both installments of the wandering samurai's adventures hold up remarkably well today.

As much as Seven Samurai captured the spirit of the Western genre---particularly the films of John Ford, Kurosawa's favorite American director---Yojimbo (above and below) sees the director in full-on Western mode, from the heroic entrance if the protagonist onward. Set in a dry, dusty town overrun by thievery, gambling and murder, Yojimbo shows us how a clever individual can play for opposing teams and still emerge victorious. Right from the memorable opening sequence---in which a stray dog is seen carrying a human hand in its mouth---the wandering samurai is taken aback at the environment he's stumbled upon, but Sanjuro quickly settles in for a bit of thievery, gambling and murder of his own.

His unmatched skill with a sword makes Sanjuro a hot commodity, while his cunning ability to do business ensures that his skill won't be taken advantage of. As the violent story unfolds, we see just how quickly organized crime can become disorganized.

Directly influenced by Dashiell Hammitt's novels Red Harvest (1932) and The Glass Key (1942)---and, in turn, completely remade as a spaghetti western in Sergio Leone's A Fistful of Dollars (1964)---the brash but focused Yojimbo stands as a true Japanese classic, thanks to the weight of Kurosawa's capable direction, Mifune's charismatic performance, Masaru Sato's memorable score and many other elements.

Thankfully, a large majority of the cast and crew---including those already mentioned---would return less than a year later with Sanjuro (below), the second installment of our hero's adventures. While this second chapter shares a similar confidence and style with the first, Sanjuro is a slightly more subtle, deliberate and intimate affair---but it's still brimming with action and black comedy, of course. This time around, the wandering samurai joins forces with nine young men who seek to prevent a false accusation of corruption; unfortunately, the clan leader's uncle is kidnapped along the way. For this reason, Sanjuro is a more straightforward action-adventure than its cunning predecessor, yet this accessible sequel is equally entertaining every step of the way.

From the less majestic (yet equally appropriate) introduction of our charismatic hero to the blood-soaked final duel, Sanjuro crackles with sharp wit, tightly choreographed swordplay and a simple but clever story that keeps everything grounded. This would be the last proper adventure for Mifune's memorable character (though he made an unofficial return in later films like 1970's Zatoichi Meets Yojimbo), not to mention one of the final collaborations between Kurosawa and Mifune. Sanjuro is a lot of things, but it's certainly not the inferior follow-up that many sequels prove to be; in all departments, it's a respectable companion piece that easily holds its own weight.

Sadly, the original Criterion releases of Yojimbo and Sanjuro proved to be two of the least impressive titles in the studio's usually reliable catalog. The source elements were less than ideal, further worsened by slight cropping of the transfer and a lack of amamorphic enhancement (a practice that Criterion had not yet employed at the time of their release). Like Brazil, Playtime and several others, these re-issues of Yojimbo and Sanjuro correct the shortcomings of the first attempts---and just for good measure, we're also treated to a handful of interesting supplements for each film.

Available separately or as a two-disc boxed set (the subject of today's review), fans will find that both upgrades have certainly been worth the wait. They may be overshadowed by Criterion's stunning upgrade of Seven Samurai, but any self-respecting fan of Kurosawa should find this important re-release to be one worth hunting down. Let's take a closer look, shall we?

Presented in their original 2.35:1 anamorphic widescreen transfers, Yojimbo and Sanjuro look much cleaner and clearer than the original Criterion releases. I never owned the original discs (in hopes that the studio would one day redeem themselves), so a complete set of screen comparisons isn't included here---but I was able to find a older capture of the opening titles for Yojimbo's original release, and it's easy to see that the improvements are quite evident (original at top, new edition at bottom). The source elements are also of better quality, while Criterion's restoration work is readily apparent. Image detail and contrast are strong and sharp, black levels are solid and the anamorphic enhancement gives both films a much smoother appearance. A mild around of dirt and debris can been seen along the way, but both films look much more satisfying than the original Criterion releases.

One slight nitpick about the visual presentation---although not everyone may consider it a problem---is Criterion's continued use of "picture-boxing" transfers to combat the overscan feature found on many televisions. Those with properly calibrated setups may find this mild loss of resolution disappointing, but those without such benefits shouldn't mind. A screen capture of the uncropped image can be seen here, for those wondering how drastic the picture boxing actually appears on a properly calibrated screen.

The audio is an equally satisfying presentation, as both films are paired with your choice of Dolby Digital Mono and 3.0 mixes, the latter of which preserves the original Perspecta simulated stereo effects. Both provide a satisfying atmosphere for each film, but it's hard to resist the slightly more robust 3.0 mixes (which were sadly omitted from the original Criterion releases). Background hiss is minimal from start to finish, while the Japanese dialogue and original score come through nicely (though oddly enough, Sanjuro seems to have been mixed slightly louder). Optional "new and improved" English subtitles are also included for the main feature and supplements. 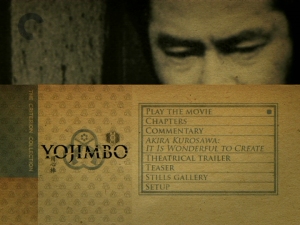 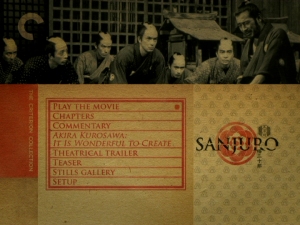 Seen above, the 1.33:1 menu designs for Yojimbo and Sanjuro are simple and easy to navigate. The 110 and 96-minute films have been divided neatly into 27 and 21 chapters, while no obvious layer changes were detected during playback. When purchased separately, each film is housed in its own clear slim keepcase with handsome double-sided artwork; when purchased as a boxed set, an additional matte-finish slipcover surrounds both cases snugly. A booklet is also included for each film, containing essays by film critics Alexander Sesonske and Michael Sragow, as well as retrospective notes from Kurosawa and members of the cast and crew.

Bonus Features
Recorded exclusively for Criterion in 2006, both Yojimbo and Sanjuro have been paired with feature-length Audio Commentaries by film historian Stephen Prince. As with past Prince commentaries, his retrospective observations are briskly paced but easy to follow---and with minimal breaks in the action, these comparisons and contrasts between Yojimbo and Sanjuro will certainly entertain and enlighten fans of both films. Thankfully, Prince pays plenty of attention to the often-overlooked Sanjuro, pointing out the subtle but distinct differences to its more popular predecessor. Both are certainly recommended listening, as equal and balanced to one another as the films themselves.

Each disc also includes an installment of Akira Kurosawa: It Is Wonderful to Create (44:36 and 34:46, respectively), with both vintage featurettes focusing solely on the films at hand. Seen below, these enjoyable pieces include interviews with Kurosawa, actor Tatsuya Nakadai, collaborator Teruyo Nogami, production designer Yoshiro Muraki, cinematographer Takao Saito and several others. The former includes plenty of discussion about Yojimbo's success at the Japanese box office, as well as the detailed set design and Kurosawa's distinct directorial approach; the latter focuses more on character retrospectives, the blistering final duel and several other production tidbits. As with past installments of It Is Wonderful to Create, these are presented in Japanese with removable English subtitles.

Also present on both discs are each film's Theatrical Trailer (2:36 and 2:33, respectively) and Teaser (1:24 and 0:25), highlighted by additional on-set footage and glowing praise for the soon-to-be-released films. All four clips are presented in 2.35:1 anamorphic widescreen with removable English subtitles. Closing things out is a pair of brief Still Galleries, each boasting a handful of pictures taken during the filming of Yojimbo and Sanjuro. All things considered, it's a well rounded batch of supplements for both deserving films---and at the very least, a substantial upgrade from the previous Criterion releases. 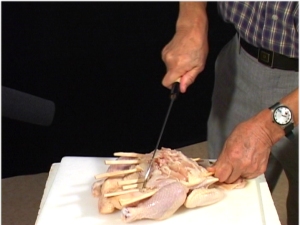 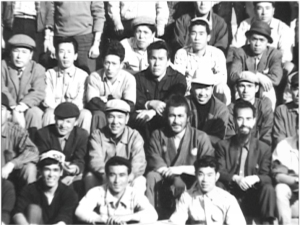 When viewed individually, Yojimbo and Sanjuro stand tall as entertaining and important samurai films; together, even more so. The potent mix of action, drama and comedy carries each installment wonderfully, further enhanced by the performances of Toshiro Mifune and the supporting cast. Criterion's DVD presentation rights the wrongs of its previous attempts, boasting an excellent technical presentation and an even-handed, appropriate set of supplements for each film. Although fans of Yojimbo and Sanjuro can purchase these discs separately, this discounted box set is the easiest way to get the complete story in one solid package. Either way, you can't go wrong. Highly Recommended.