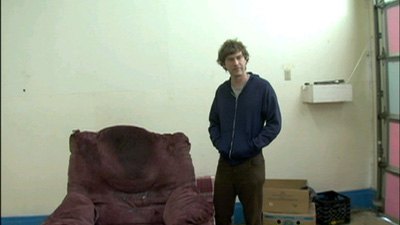 As The Puffy Chair began, I thought I was in trouble. Opening in a cramped kitchen apartment, cutting back and forth between Josh (Mark Duplass) and Emily (Kathryn Aselton) as they speak baby talk over dinner, I thought I was in for another amateur indie that thinks all that is required for realism is having no polish at all. Little was I prepared for the self-assured cinema verite that was just a couple of cuts away.

It's the eve of a road trip for Josh, and this is supposed to be a tender night for the two lovers to enjoy one another's company before the separation begins. Only, Josh takes a phone call, and the pointless conversation he has with one of his buddies annoys Emily. She storms out of the house, leaving Josh confused and frustrated. Never one to take things as they are, he shows up at her house the next morning, aping John Cusack's moves from Say Anything and inviting Emily along for the ride. It's a clever move, more than a simple riff on a famous scene from a popular film. Josh's twisting of the gesture is a wink to the audience to let us know that standard movie tropes are not going to work in the world of The Puffy Chair. It's also our first hint that Josh is always playing an angle. He may not pull something off on the first try, but he'll find some way to work it.

The Puffy Chair is a family affair. Behind the camera are the Brothers Duplass, Jay (who directs and writes) and Mark (who writes, produces, and stars). The two also roped in their parents to serve as executive producers, and they even make a brief appearance on film as Josh's parents. This is down-home indie, and it reminds us what maverick filmmaking used to be like: mutual artistic minds coming together to create something about real people. The tightly framed early shots are just a pinprick into the wide open living space the Duplass clan will be peering into.

Ostensibly, The Puffy Chair is a road movie. Josh has found a burgundy recliner on eBay that looks exactly like the one his family had when he was a kid. It's in a store at a midway point between his NYC home and his parents' house. His father's birthday is at the end of the week, and so he is going to drive down, get the chair, and hand-deliver it to the old man as a present. The trip will now also serve as some alone time for himself and Emily, who is hoping that the relationship will finally move forward into some kind of long-term commitment. Naturally, the itinerary will not go as planned. They never do in road movies, because the journey isn't really from physical point A to physical point B; it's about the obstacles in between that teach the travelers something about themselves.

The first obstacle is the pit stop to see Josh's little brother Rhett (Rhett Wilkins). The second is the chair itself, which turns out not to be exactly as described on the internet. Stuck in the middle while they wait for the chair to be repaired--clowns to the left, jokers to the right--the trio must contend with the idle time they now find themselves with. Of course, we all know what happens during idle time, and Rhett ends up being the catalyst for the unraveling. Josh is both dismissive of and amused by his brother's freewheeling romanticism, and one cynical comment too many causes Emily to lose her cool. That's when we start to see Josh's true colors. The angle he was playing by inviting Emily along is now obvious: he thought it would put the brakes on the conversation he didn't want to have. The problem is, it's the one situation he doesn't have an angle for. There is no posturing or backdoor scheme that can get him out of it. This is why he falls back on those superficialities that were so annoying in the opening scenes.

As a plot situation, The Puffy Chair features no great innovation. What makes it so fresh and irresistible is the unblinking honesty of the presentation. All of the actors have a very easy way about them. For situations they encounter on the road, they keep their performances loose, just a hair shy of feeling like improv, but when the mood gets heavier, they zero in for true emotional clarity. The camera style backs that up. Shot on the fly in real locations, with live sound and what looks like authentic lighting (or a semblance thereof), Jay Duplass keeps the narrative flowing unencumbered. This maintains the sensation that it's all happening in front of you, and the cameras are just capturing the story as it goes.

When it comes down to it, the filmmakers don't opt for the easy wrap-up. The Puffy Chair could easily be remade into a Zach Braff vehicle where we know exactly what the final shot will be as soon as the big studio logo appears onscreen, but until that day, the original will stand true to its convictions to present its central relationship as it is. It's an ending that makes sense, even as you might struggle against it, and why The Puffy Chair wasn't just another ho-hum entry on the festival circuit.

The Duplass Brothers already appear to be working on another feature, and I hope they will stay true to the spirit that birthed The Puffy Chair. If they do, this duo is going to be very interesting to watch. 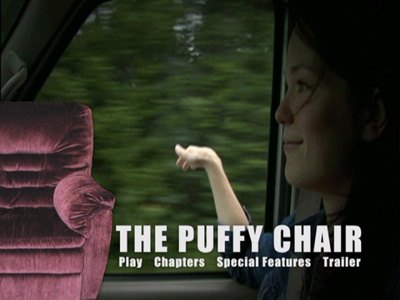 Video:
A clean widescreen presentation that looks really nice. Though shot with a small budget, it never feels like it, and more importantly, this transfer doesn't look like it.

Sound:
A simple English stereo mix, but the sound is clear while maintaining the atmosphere of the production.

Extras:
The Duplass Brothers load the DVD up with supplemental material, the most superfluous of which is a 7 minute 30 second "interview" where they trade questions while driving in a van. It's a little cutesy, with too many flubs left in. The interior of a moving vehicle is not really the best place for such an exercise, and it seems unnecessary when there is also a full-length audio commentary to the movie. The Brothers give you all the information you could possibly want about the making of this feature there, and for anyone who wants to make their own film and wonder what it takes, this dialogue between them is a good place to start. They'll even remind you about turning off an idling car if you want to capture live sound, or you'll have to dub it later like they did.

There are seven deleted scenes, including an eleven-minute rough cut of a discarded opening. The Brothers appear on camera before each cut to explain why the scene was removed, and in each case, their logic bears out. They aren't horrible scenes, but The Puffy Chair really is better off without them. A 5 minute 30 second outtake reel adds on to this, showing flubs and on-set hijinx. It's fairly entertaining, but in all honesty, I'm pretty over seeing actors laugh during a take.

The "Vlog" section has four short promo films that show some Puffy Chair guerilla marketing and double as marketing themselves (my guess is they were broadcast online). They show the brothers playing slip-n-slide on a tarp with a puffy chair printed on it, putting stickers on buses and inside urinals, and an "audience testimonial" starring their mom. These are amusing.

The big bonus is three early short films made by the Duplass Brothers, all with Mark as the lead and two of them co-starting Kathryn Aselton (Mark's real-life fiancée). They are:
* "This is John" (7:30): One man's war with the outgoing message on his answering machine.
* "Scrapple" (10:25): A scrabble game between a married couple turns into a full-blown fight.
* "The Intervention" (15:00): An odd film about a group of friends ganging up on one of their own insisting he needs to admit he's gay.

FINAL THOUGHTS:
Recommended. This is a strong DVD package for an intriguing debut film from the Duplass Brothers. The movie The Puffy Chair takes the standard relationship road-trip plot and freshens it up with human performances and a down-and-dirty filmmaking style. As cowriters, the brothers made some hard choices that keeps the movie from slipping into saccharine. Factor in all the extras included, and the Puffy Chair DVD has all the requirements DVD fans look for. 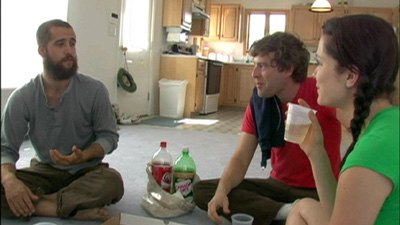