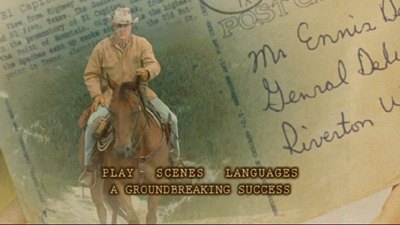 It's been about a year now since the Brokeback Mountain phenomenon. A year since the success, the hype, the awards and the backlash, and, of course, the endless string of punch lines. (The definitive reason I decided once and for all not to see Night at the Museum: the new commercial with Owen Wilson making a "Why can't I quit you?" joke. Suddenly the backdated pop-culture humor in the Shrek movies feels timely.) To cap it all off, Focus Features is releasing a new two-disc special edition DVD, which forces one to ponder, has the movie survived it all?

Having watched Brokeback Mountain again last night, I'd have to say yes. The movie's quality was more than enough to withstand the whirlwind of publicity that swirled around it, and now that the dust has settled, it continues to stand tall as a truly heartbreaking piece of filmmaking.

By now, everyone knows the story. In 1963, two cowboys, Ennis (Heath Ledger) and Jack (Jake Gyllenhaal), head up to an isolated ridge on Brokeback Mountain to babysit a flock of sheep for the summer. Ennis is quiet and reserved, Jack is loud and gregarious, and for the mismatched pair, friendship comes slowly. Once the bond is there, they discover it is more than just friendship. One night, they indulge in their physical attraction for one another, beginning a love affair that will span twenty years. Once they leave the mountain, however, they must return to their lives and accept that the social mores against homosexuality will never allow them to be together. Both start families, but their hearts aren't in it. They mainly live for their regular fishing trips in the middle of nowhere, when they can be alone. Yet, with emotions that run so deep, keeping them quiet is never easy, and it wreaks havoc on both of them.

The story of Brokeback Mountain was originally written by Annie Proulx, and it was adapted for the screen by perennial western writer Larry McMurtry (The Last Picture Show, Lonesome Dove) and his writing partner Diana Ossana. They were a perfect choice for the script, as McMurtry's best work combines an authentic western flavor with living, breathing characters. The writing duo manages to make the trappings of the story ring true while also handling the sensitive emotional issues with the proper sensitivity. Their hiring was just the beginning of a series of absolute right choices that seemed to bless this long-gestating project as it crystallized into the final picture.

Ang Lee was chosen to direct the movie, and outside of James Ivory, I can't think of a director more suited to stories about people who have strong feelings they aren't capable of addressing (Sense & Sensibility, The Ice Storm, and even the Michelle Yeoh and Chow Yun-Fat relationship in Crouching Tiger, Hidden Dragon). Though Brokeback Mountain is called that "gay cowboy" movie, both descriptives seem superfluous. The raw, emotional power of Brokeback Mountain is neither exclusive to homosexuals or cowboys; it's human love that makes this story resonate. The hurt and the anguish experienced by Jack and Ennis transcends sexual preference or lifestyle. Brokeback Mountain connected so powerfully with audiences because it didn't matter who was sitting in the theatre, everyone could understand the pain.

All of the actors in the movie do excellent work. Gyllenhaal, Anne Hathaway, and Michelle Williams are all phenomenal. The true star, however, is Heath Ledger. What a revelation! None of his prior work could quite prepare us for the monolithic physical presence that he would display as Ennis. Here is a man who only speaks when forced to, who does everything with his body, and even when his head is down and he's hiding behind his hat, Ledger practically leaps off the screen. He's like Brando the way he so completely inhabits this different skin. His immersion in the character makes it all the more devastating when Ennis ultimately crumbles. 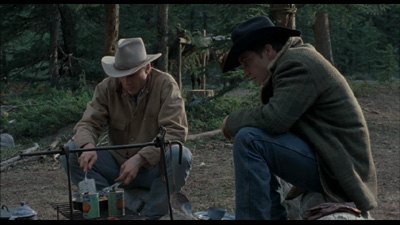 Okay, so as a motion picture, Brokeback Mountain still holds up. So, why the need for this double-dip? Francis Rizzo III reviewed the first edition for this site, and he gave it high marks. Despite having been rushed out for awards season, there were still a couple of extras and a decent transfer. Reading his description of the picture quality, I'm inclined to believe this is the same exact transfer on the main disc. I noticed the same small problems with edge enhancement, but everything else was excellent looking. The sound options, on the other hand, have been kicked up a notch, with the addition of a Spanish dub in 2.0 and an English 5.1 DTS track to the pre-existing English and French Dolby Digital 5.1 mixes. The same subtitle options are also present.

This means the real value of the upgrade is totally reliant on the extras. There are seven supplemental programs on the Collector's Edition. Four of them are the same features that were on the previous one-disc edition--"Directing from the Heart: Ang Lee," "From Script to Screen: Interviews with Larry McMurtry and Diana Ossana," "Sharing the Story: The Making of Brokeback Mountain," and "On Being a Cowboy"--all of which are good, but are largely the sort of fluff pieces created for advance promotion of a film. As the previous reviewer noted, "Sharing the Story" was actually produced for the Logo cable network, and it's the most extensive feature here. Two of the others focus on the director and the screenwriters, and "On Being a Cowboy" is about the preparation put in by Ledger and Gyllenhaal to play roughnecks.

This leaves us with a scant three new features to justify a brand-new double-disc release. Not a whole hell of a lot.

The first disc has only one of these featurettes, a 17-minute program called "A Groundbreaking Success," focusing on the social and political relevance and reaction Brokeback Mountain received. Social commentators and film critics are the main speakers, but there are also clips from the cast and crew, some of which seem like new interviews and some (Ang Lee, maybe?) that might be older footage. It's an interesting discussion, touching on the marketing challenges and even the parodies that followed, but it does maintain a reverential tone that is a bit much on the self-importance scale. I'd have actually liked to see a bit from the opposition to give us the full spectrum, even if it would have done little more than get me grinding my teeth in anger.

The other two new features are on DVD 2, along with the four old ones. Those four old ones combine to a total of 55 minutes, whereas the new features don't even reach 14 minutes. "Impressions from the Film" is a 2-minute 30-second still photo montage set to an instrumental from the movie soundtrack. "Music from the Mountain" is an 11-minute and 14-second look at the construction of the score, including finding singers to fit into the period of the movie. It's fairly standard for how these kinds of promo films run, made somewhat more interesting by the personality of the composer, Gustavo Santaolalla.

So, if you're looking for some new items to shed light on the Brokeback Mountain project, look elsewhere.

Beyond the special features, the packaging for Brokeback Mountain: 2-Disc Collector's Edition was impeccably handled. A nice blue cardboard slip case houses a folding carriage with a single plastic tray that holds both DVDs and a sleeve for the eight sturdy postcards that are exclusive to this set. Granted, the value of said postcards is dependent on your love of the movie and of this kind of extra, but the production values on them can't be faulted. The images chosen reflect the characters and the stunning panoramas Ang Lee chose to shoot his movie against, and range from the iconic (Ennis standing in front of exploding fireworks on July 4th) to the more personal (the men with their wives). Each card has a quote on the back, either from a critic or a member of the crew. The most important card for fans, however, will be the reproduction of the first postcard that Jack sends Ennis following their time on Brokeback, including his hand-written note on the back.

FINAL THOUGHTS:
On the basis of the movie, and the all-around quality of the set, I would definitely say that the Brokeback Mountain: 2-Disc Collector's Edition is Highly Recommended. If you've held off on buying this movie for your collection, now is the time. This is the way to go. The movie is still an amazing portrait of an enduring love and the heartbreak that lies at the end of it, and the bonus features are of fine quality. Given that this is a double-dip, however, it's a pretty unimpressive one by those standards, and there is likely no need for those of you who own the original single-disc release to dump that and upgrade. 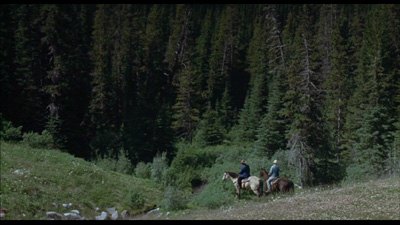