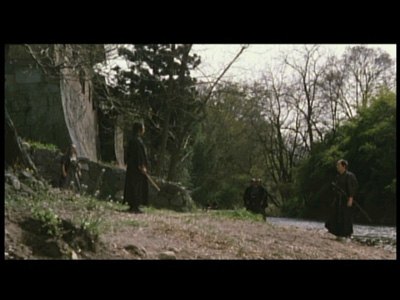 When we think of samurai films, we tend to think of action epics with lots of fighting and fountains of blood, usually with a theme of good vs. evil, honor vs. dishonor. What tends to get overlooked, however, is that being a samurai is a class distinction, and like any other social structure, there are different levels. Just as there are nobleman samurai, there are also petty samurai who are required to do things like catalogue the food supply.

Yôji Yamada's 2002 film, The Twilight Samurai, concerns itself with just such a figure. Seibei Iguchi (Hiroyuki Sanada, The Promise) is a widower who struggles to get by, supporting his two daughters and his senile mother. His wife was from a higher class than he was, and her prolonged illness and the funeral that befitted her station have left Seibei horribly in debt. His coworkers find the state of disrepair his constant struggle has left him in to be comical. His hygiene leaves something to be desired, and he always rushes off at the end of the day rather than go out carousing with his buddies. This is why they call him "Twilight." He always disappears as the sun sets.

Seibei's friend Iinuma (Mitsuru Fukikoshi, Samurai Fiction) doesn't really understand his pal's point of view, but he respects it. There is also a deeper connection between Seibei and Iinuma's sister, Tomoe (Rie Miyazawa, Peony Pavilion), but neither of them is able to voice their feelings. When Tomoe's abusive ex-husband returns to cause her further trouble, Seibei steps in and defends her honor. Word of his previously hidden fighting prowess spreads, and before he can stop it, Seibei finds himself forced back into the sword-wielding lifestyle.

Hiroyuki Sanada is a marvelously gifted actor. He could have made far more obvious choices for his character, following the cliché of endless action flicks where the hero has retired to a private life free of violence. Most of the time, those characters remain stoic, never losing their proud posture and so are always obvious candidates to be pulled back into their old ways. Sanada instead portrays Seibei as truly world weary. Life hasn't been easy for him, but he accepts the blows willingly. As a loving father, he has already received his reward, even if it does leave him with little energy to do anything else. When he prepares for battle, it's with a heavy sigh, not a defiant scream.

Working off of the prose work of Shuuhei Fujisawa (whose novels have inspired a trilogy of films from the director), Yôji Yamada also plays it cool. The climactic battle between Seibei and the crazy swordsman is more an exercise in defeat for both of them than it is one last shot at glory. The victory could almost be measured by who was more beaten down before entering the fray than who is left standing when the duel is done.

These smart tactics make the sweet sentimentality of The Twilight Samurai truly pleasurable. Seibei is a wonderful character, a father figure and a dutiful friend that the audience can really get behind. There are some obvious comparisons that can be drawn between him and some of Akira Kurosawa's more sensitive swordsmen (usually played by Takashi Shimura), but The Twilight Samurai really stands apart as something special all on its own. 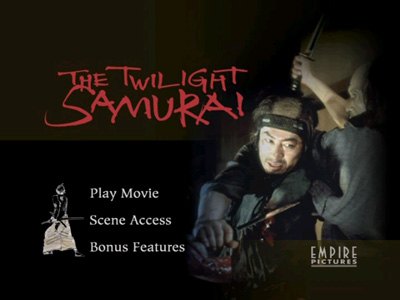 Video:
Unfortunately, the DVD also stands apart, but not at the same level of distinction. When The Twilight Samurai showed back up in the DVD Talk review pile, I hoped that the distributor had quietly snuck out a double-dip upgrade to fix the rather bad problems with the R1 disc. No dice, this is the same DVD that came out two years ago, meaning it's got a 1.85:1 aspect ratio but is not anamorphic. The image itself is also far from perfect, with persistent problems with graininess, inconsistent blacks, and edge enhancement. Someone really needs to take this film and make a proper North American disc of it.

Sound:
The sound mix fares much better. Even though it is just a 2.0 Dolby track, some care was obviously put into it, as there are some nice atmospheric moments to be had. The audio is the original Japanese language track, and the English subtitles are fairly good, with only the occasional typo. Some may dislike that the subtitles can not be turned off, but given that I will probably never watch the film without them, that doesn't bother me so much.

Extras:
Close to half-an-hour of interviews with the director and star. These are pretty good, though I would have rather had more subtitles than having Yamada dubbed into English. (Sanada speaks English himself).

You also get the original theatrical trailers, as well as two others.

FINAL THOUGHTS:
I cannot stress enough how good The Twilight Samurai is. Yôji Yamada has found new life in the samurai genre, focusing on the more personal story of a very different kind of swordsman. This is not, however, the DVD version you want to have in your collection. If you can, track down the much better Region 3 edition, or if you want to wait for a better U.S. release, go out and Rent It instead. Whichever route you choose, just make sure you see it. 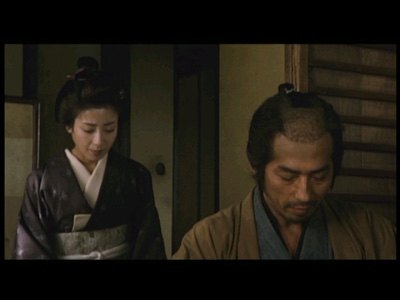