Criterion continues to release a wide range (some would say eclectic) of quality films often restored.  One of their latest releases is a set of four sci-fi and horror films from the 1950's, Monsters and Madmen.  Consisting of a quartet of films produced by Richard and Alex Gordon, these are all low budget efforts to be sure, but each of them manages to raise above their poverty row origins.  The first two are horror films, The Haunted Strangler and Corridors of Blood which star Boris Karloff, and the second pair are SF films The First Man into Space and The Atomic Submarine.  While none of these can be considered classics of the genres, they are all good examples of just would could be accomplished on a shoe string budget with a little imagination. 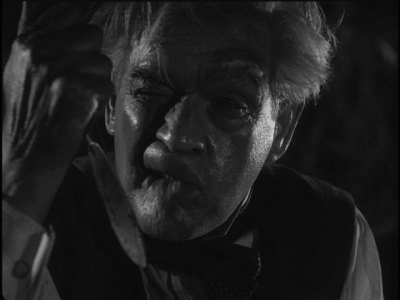 James Rankin (Boris Karloff) is a novelist in 1880's London researching the case of the Haymarket Strangler.  Twenty years earlier a man named Styles was executed as the Strangler but Rankin thinks that the evidence was flimsy and that if the man had a lawyer to represent him, he would have been acquitted.  Against the protests of him loving wife Barbara (Elizabeth Allan), the Rankin investigates a theory of his:  that the real murderer was actually the doctor who performed the autopsies on the victims: Dr. Tenant.  He follows Tenant's trail after the accused murdered was hanged, but loses him after he was admitted to a hospital and disappears.  Rankin does discover Tenant's belonging that he left at the hospital including his medical kit that is missing the scalpel, a weapon that could have been used by the Strangler.  Becoming obsessed with finding the scalpel, Rankin digs up Styles grave in the dead of the night and discovers the weapon.  When he does, the killings start again.

This was an effective film that works very well.  Director Robert Day, despite working with a tight budget, manages to create a realistic feeling 19th century London and a gives the film a lot of atmosphere, especially in the second half.  The scene where Karloff digs up Styles grave is eerie though it was obviously done on a set, and the parts where Karloff stalks the dancers at a night club had a fair amount of suspense.

The main thing that the film has going for it is the strong script.  The story is well plotted with a few surprising twists that make it fun to watch.  Though the romantic sub-plot between Rankin's daughter and his assistant seems extraneous, it doesn't take up as much time as it could have.

Another aspect that has to be mentioned is the wonderful job Karloff did as the monster.  Instead of using makeup, Karloff removed his dentures, distorted his face, and turned his left hand into a claw.  Though it many sound lame, his transformation was very effective and made the film seem even more creepy because of the lack of fake looking appliances. 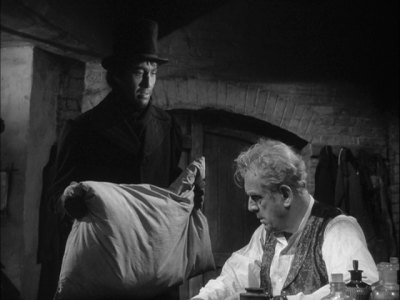 Dr. Thomas Bolton (Boris Karloff) is one of the best surgeons in 1840's London.  Not because of his diagnostic skills or because of his steady hand with a blade, but because he's the fastest.  In this day before anesthetic, an operation was accomplished by having several burly men hold the patient down while the doctor sawed through a diseased arm or leg as fast as he could.  The pain was unimaginable and many patients went into shock and never recovered.

Going against popular opinion, Bolton is looking for a way to separate "pain and the knife."  He's sure that he can come up with a gaseous substance that will dull the pain and remove the trauma of surgery.  To achieve this end, he experiments on himself at night, administering different drugs in the hopes of discovering an anesthetic.  Ridiculed by his coworkers, he becomes a driven man who eventually becomes addicted to the drugs he's using.

Despite the title, this wasn't a horror movie; it's more of a heavily fictionalized history of the discovery of ether.  There really isn't much that is scary or horrific aside from a couple of scenes in the operating room. Even the sub-plot involving an inn owner who, along with an accomplice (played by Christopher Lee) cons Bolton into signing death certificates of men they have murdered in order to sell the cadavers to the local medical school fails to give the film much of a chill.

The movie also drags a bit.  Thought Karloff does an excellent job as the noble but misguided doctor, the plot doesn't actually gallop along.  Christopher Lee is menacing as the cold blooded murderer and the scenes that the two horror greats have together are fun to watch.  Director Robert Day does an excellent job once again of recreating 19th century London.  The sets are realistic looking (though I'd imagine that there'd be a lot more excrement in the streets) and that helps create the atmosphere of the film.  While this is more historical drama than horror film, the movie does have enough to recommend it. 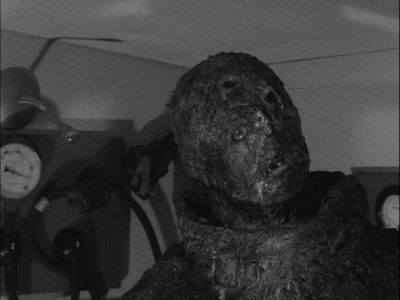 Gung ho air force test pilot Dan Prescott (Bill Edwards) likes to fly high and fast and hates to take orders, especially from his commanding officer who also happens to be his brother Charles (Marshall Thompson).  When Dan is given the chance to test a new plane he breaks with protocol and takes the plane up higher than he should...so high that he actually reaches outer space.  Unfortunately his plane runs into a meteor storm and crashes to earth.  When the wreckage is discovered, there's no sign of Dan and he's presumed dead.  Soon a string of murders start with the victims having their blood drained from them and a mysterious residue left at the murder scenes, the same residue that was found encrusted on Dan's ship.  Charles realizes that his brother has changed, and vows to track him down.

This was a fairly typical monster movie from the 50's that rises over the others due to some creative use of stock footage.   They bought some film that was taken by rockets in the upper atmosphere and superimposed a cockpit over it.  This makes the flying scenes look particularly impressive and realistic and makes the film feel much more expensive that it really is.  The monster makeup was adequate, creating a plausible (well, sort of) creature that looked creepy while not betraying its human origins.

The movie was hampered by a pretty hokey script with some absurd dialog.  One of the most idiot scenes involve a Mexican diplomat who complains to the Air Force officials about the wayward US missiles that are falling on his country.  Doctor Who fans will recognize Roger Delgado who was the first to play The Master as the delegate who is basically blown off by the people he's talking to. 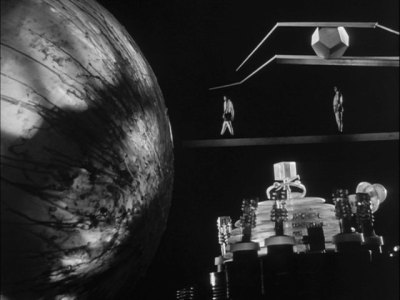 The set concludes with the best movie, The Atomic Submarine.  In this futuristic drama commerce and travel between hemispheres is accomplished by submarine, with a popular sub-sea route passing right over the North Pole.  When subs start to disappear, the government assigns the Tiger Shark, one of the newest nuclear subs, to hunt down the parties responsible.

Arriving at the pole, the Tiger Shark discovers an alien space ship, and tries to hunt it down.  They play a game of cat and mouse for a while until one of the on board scientists discovers a pattern to the attacks; after each attack the extraterrestrial ship returns to the North Pole to 'recharge.'  The Tiger Shark waits in ambush and attacks, but has little success fighting the alien menace until the commander gives the order to ram.  The sub hits the space vessel but becomes entangled and a crew of officers has to enter the space ship to free the Tiger Shark.

Despite wooden acting and some ridiculous dialog, this was an intriguing and fun film.  The fact that the story takes place underwater is unique in the alien menace genre (well, in the 50's at least) and makes the film stand out from the crowd.  The films strength is in the way they stretched their small budget when coming up with the interior for the alien craft.  Instead of building elaborate sets that would have looked a bit hokey, the creators took a minimalist approach.  The alien ship is cavernous and black, with walkways leading to more empty spaces.  The alien itself, when it's finally revealed, is startling and creative and works very well.  Though the plot is similar to countless other alien invasion films of the time, this one has enough new and creative twists to make it seem new and different.

The mono audio track that accompanied these four films has been restored and sounded very good.  Typical audio defects that typically plague films of this age are either very minor or nonexistent.  There is no hum or background hiss, and the range is adequate though not incredibly wide.  The dialog is easy to hear and the background music is strong without being overwhelming.

All four films are presented with a 1.33:1 aspect ratio, which Criterion claims is how the films were originally displayed.  DVDTalk reviewer Glenn Erickson in his review of the set correctly asserts that most films by this time were framed at 1.66:1.  My own research couldn't determine for sure how these films were shown theatrically, though I did think that images were a little tight, especially on the Karloff films.

Aside from that possible flaw, these films look great.  The black and white images are crisp and clear with a good amount of detail.  The blacks were solid and the range of grey shades was wide and appropriate.  On the digital side things look just as good.  Aliasing and other compression artifacts were nonexistent.  This is a wonderful looking set of films.

Each film comes with a good selection of bonus items.  There is a commentary track with the ever knowledgeable Tom Weaver who has written extensively on this period of film and producer Richard Gordon.  These tracks are informative and enjoyable and though a couple drag in places they are well worth listening to.

Every film also has a short (about 10 minute) featurette where the cast and director (of three of the films) Robert Day reminisce about the movie.  These were fun, and everyone who worked with Boris Karloff has nice things to say about him.

There are trailers for all of the films and often radio commercials touting the movie as well as still galleries.  A nicely produced package.

While these are not the best films Criterion has ever released, all four are above average examples of low budget 50's SF and horror movies.  Entertaining and fun these pictures use imagination and creativity to overcome their meager budgets and are well worth watching.  Criterion has done a wonderful job restoring these films, they look much better than one would expect.  Fans of the genre should run out and pick up this excellent set.  Highly Recommended.