Riding Alone for Thousands of Miles

Sony Pictures // PG // February 6, 2007
List Price: $29.95 [Buy now and save at Amazon]
Review by Stuart Galbraith IV | posted February 1, 2007 | E-mail the Author
Flush with success following two epic action spectacles, Hero (2002) and House of Flying Daggers (2004), Chinese director Yimou Zhang wisely returned to the type of small-scale, low-key drama that first brought him international acclaim. Riding Alone for Thousands of Miles (Qian li zou dan qi, 2005) revisits the kinds of characters and subject matter for which, 50 years from now, he will most likely be remembered. As with The Story of Qiu Ju (1992), The Road Home (1999), and Not One Less (1999), this film is concerned with "the unimportant people" as the director describes them: a quietly determined, indefatigable protagonist who refuses to bend or give up on something once decided; people of rural China who generally lack a formal education, living lives essentially unchanged for generations; reams of bureaucratic red-tape that must be overcome. Though Riding Alone for Thousands of Miles falls a bit short of Zhang's best work, it's compensated through novelty, as the film is as much a vehicle for the great Japanese star Ken Takakura. 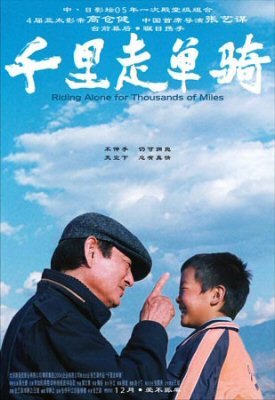 The story opens in Tokyo, where Goichi Takata (Takakura), a fisherman in remote northern Japan, meets with his daughter-in-law, Rie (Shinobu Terajima, daughter of actress Junko Fuji, who starred opposite Takakura in about a dozen movies) at a Shinjuku hospital. Rie's husband, Oriental arts scholar Kenichi, is terminally ill but refuses to see his long-estranged father.

Rie gives Takata a videotape of a television documentary featuring Kenichi visiting Yunnan Province, where he had unsuccessfully attempted to persuade a local Chinese opera singer, Li Jiamin (Li Jiamin, a real-life Beijing opera star), to perform the famous, 1000-year-old "Riding Alone for Thousands of Miles." Rie was simply hoping that by giving her father-in-law the video he might better understand her husband's passion for Chinese opera, but instead it inspires Takata to travel to Yunnan Province himself, where he plans to film the singer's performance and bring it back to show his dying son.

Once in China, however, Takata finds himself up against insurmountable roadblocks in achieving this goal. Li Jiamin has since been arrested for assaulting a man and sentenced to three years in prison. Jasime (Jiang Wen), Takata's Japanese-speaking tour guide, frowns upon Takata's plans to try and get permission from the authorities to film Li Jiamin's performance inside the prison, and when a local man familiar with Li Jiamin's case, Lingo (Lin Qiu), sets up a disastrous meeting with local officials, both Jasmine and Lingo try to dissuade Takata and send him packing. Takata, however, has other ideas.

The screenplay moves in unexpected directions from here and is best experienced rather than read in a DVD review. Suffice to say that the film draws parallels between Takata's estranged relationship with his son and Li Jiamin with his, a small boy named Yang Yang (Zhenbo Yang). In a very understated and upbeat way, the film also explores prickly Japanese-Chinese relations, which politically have been strained for many years. But in far off Yunnan, suspicion about Takata's motives quickly gives way to warm friendships.

The film is primarily a showcase for Ken Takakura, whose screen persona and career in Japan might be likened to that of Clint Eastwood in America. Both played laconic, poker-faced tough guys throughout the 1960s and '70s, and beginning with 1970s Too Late the Hero, Takakura occasionally was recruited for Hollywood productions, most notably 1974's The Yakuza and Ridley Scott's Black Rain (1989). But like Eastwood in the last quarter-century, Takakura in his sixties and seventies has turned to more ambitious, elegiac, and introspective film roles (A Distant Cry from Spring, Poppoya), and Yimou Zhang, obviously a fan of the actor, wrote the part with him in mind.

Like Eastwood's less-is-more style, Takakura probably says fewer than 100 words in the whole film (once you take away his character's occasional narration). It's the kind of acting that, in his facial expressions, externally seems inexpressive yet internally the character's thoughts are sometimes quite clear, even when his reasons remain enigmatic. Takata is also a typically "Takakuranian" role insofar as the character rarely feels compelled to explain his actions or express his emotions, though the part pushes the envelope in ways not unlike Eastwood's revelatory performance in Million Dollar Baby. The Japanese scenes were co-directed by Yasuo Furuhata (Poppoya, The Firefly), who has helmed most of Takakura's recent films.

Except for Terajima, the rest of the cast is composed of non-actors from which Yimou Zhang extracts compelling, truthful performances. (Both Jiang Wen and Lin Qiu, for instance, were actually tour guides in real life, and not professional actors.) And, as with most of the director's films, Riding Along for Thousands of Miles abounds in spectacular scenery, which in this case frequently resembles the American West, especially Wyoming and Idaho.

Riding Alone for Thousands of Miles is presented in 1.77:1 format (approximating its 1.85:1 theatrical release) in a strong 16:9 enhanced transfer with an equally fine Dolby Digital 5.1 mix that does justice to Wenjing Go's fine score. A 5.1 Portuguese audio track is also available, along with a French dub in Dolby Surround. Optional English, French, Spanish, and Portuguese subtitles are available.

The English subtitles liberally paraphrase and mildly deviate from what the Japanese actors actually say, and though this reviewer doesn't speak Mandarin, it's also clear that Jasmine and Lingo are addressed not by those names but rather by Chinese one that aren't identified in the English subtitles. None of this appears to have an adverse effect on the film, but one wonders whether these changes are technically necessary and dramatically justified.

The only real supplement is a Making of 'Riding Alone for Thousands of Miles' featurette, which is full frame and runs 18 minutes. The short is filled with spoilers, telling virtually the entire story in the process, so viewers are strongly advised against watching it first. The director, Takakura and the other principals are all interviewed (most wear caps from Takakura's production company), though it makes no mention of Furuhata's contribution. Eight trailers for other Sony Classics titles are included, House of Flying Daggers and Curse of the Golden Flower (Yimou Zhang's latest) among them.

Riding Along for Thousands of Miles falls short of perfection, but it's a welcome return to the kind of stories Yimou Zhang does best, and worth seeing for Ken Takakura alone. Highly recommended.