Doctor Who - The Complete Second Series

BBC Worldwide // Unrated // January 16, 2007
List Price: $99.98 [Buy now and save at Amazon]
Review by Stuart Galbraith IV | posted February 5, 2007 | E-mail the Author
Forget Lost, forget Battlestar Galactica - the reincarnated Doctor Who (2005-present) is the best science fiction television series to come along in many a year. Equally important - you don't have to be a fan or even familiar with its long-running (1963-89) predecessor to enjoy it. The new show embraces the original's reams of mythology and characters but never to the point where only hardcore fans will benefit from the constant reference to older stories and characters. Indeed, just about everything in Doctor Who is exactly right: it's clever, funny, scary and frequently daring. Producers attempting to remake, rework, or otherwise revive a popular franchise would do well to study the careful consideration producers Phil Collinson, Julie Gardner, and head writer/co-producer Russell T. Davies, among others, have given their show. In what would seem a natural approach yet rarely done, they've studied and distilled the best elements of the original series, updated and adapted it in sensible ways, and greatly expanded upon its limitless story possabilities, and like The Doctor himself travel further and farther than ever before, without ever losing sight of the program's core appeal. 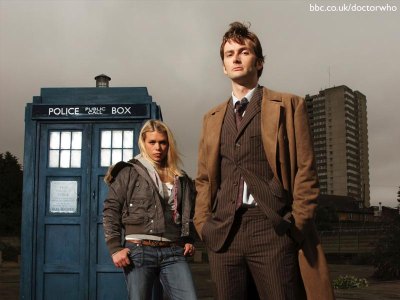 The first season/series of the new Doctor Who starred Christopher Eccleston as The Doctor, the galaxy-hopping Time Lord from the Planet Gallifrey, a humanoid alien time traveler with a particular interest in the human race. In the first series he met Rose Tyler (Billie Piper), a young shop assistant at a London department store who becomes swept up in his efforts to combat extra-terrestrials bent on destroying all mankind. Their efforts successful, Rose joins the Doctor in his travels through space and time, aboard the T.A.R.D.I.S., a space-time vehicle/laboratory disguised as an old-fashioned police box.

The first series ended with The Doctor "regenerating," as he is wont to do every few years or so. He's still the same old Doctor more or less, but now played by David Tennant. (The regenerations were an ingenious creation, used to explain the departure of the actors who for one reason or another leave the series. Tennant is the Doctor's tenth incarnation.) The classically-trained Scotsman has big shoes to fill. Audiences had embraced Eccleston's superb interpretation, which much like the series seemed to pull together all the best bits from his eight predecessors while adding a beguiling eccentricity and intelligence all his own.

The second series kicks off with an episode called "Christmas Invasion," but viewers are strongly advised to go straight to the special features section of Disc 1 and watch Children in Need Special first. It premiered on the BBC in November 2005 between the last Eccleston episode, "The Parting of the Ways" (in July 2005), and "Christmas Invasion" (which debuted on Christmas day). The Children in Need vignette, running just seven minutes, bridges the narrative between the two shows.

Early episodes in Series Two reflect the cleverness that permeated season one but it also lacks a certain freshness; the frequent chance-taking has to some degree given way to formula and repetition. "The Christmas Invasion" sets up potential series-long story threads about a top secret defense project called Torchwood while "New Earth," the second episode, promises secrets to be revealed later down the line, much as the "Wolf" motif had infused Series One.

Partly this lack of freshness is unavoidable: the inadequate production values and waning imagination of the last few seasons of the original series dated those shows much more than even the earliest seasons with first Doctor William Hartnell, which compensated for their primitive technical limitations with a boundless, often groundbreaking imagination that continues to impress four decades later. The new series introduced state-of-the-art special effects worthy of big-scale Hollywood productions, but never effects for their own sake. Bolstered by huge ratings and critical acclaim, the second series is produced on an even bigger (albeit only slightly so) scale.

It also has led to several spin-offs, including last year's Torchwood series, and the brand-new The Sarah Jane Adventures. One hopes the Doctor Who isn't spreading themselves too thin. Time will tell.

Nonetheless, each and every episode offers enough surprises to keep viewers on edge. Harriet Jones, the charming neophyte minister swept by circumstances into 10 Downing Street, is suddenly much less charming at the end of "Christmas Invasion," when she becomes just another politician, butting heads with The Doctor in the final act. (The episode does, however, find time to take an amusing swipe at the Bush-Blair relationship on Iraq.) Similarly, in "Tooth and Claw," the third episode, which finds The Doctor and Rose battling an extra-terrestrial werewolf while protecting Queen Victoria, the pair learn that even the monarchy is less grateful than threatened by the Doctor's presence.

Series Two really comes alive in "School Reunion," which compensates for its hum-drum story of flesh-eating bat creatures at a primary school (in a script similar to a famous Halloween vignette on The Simpsons) in its touching, bittersweet reunion with Sarah Jane Smith (Elisabeth Sladen), the Doctor's companion for eighty shows spanning 1973-76, during the Jon Pertwee and Tom Baker years, to say nothing of the Doctor's robot dog, K-9. 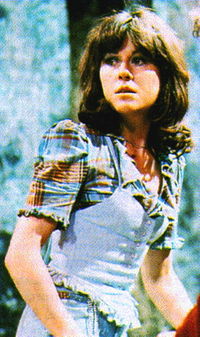 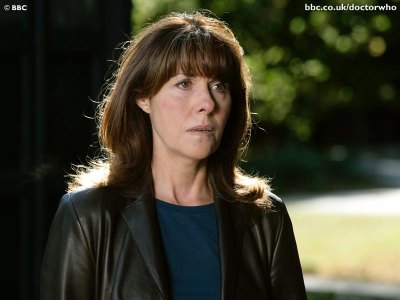 Sarah Jane Smith then and now....

The episode explores issues generally left unsaid in the original series, that the nearly ageless Doctor is, ultimately, a solitary and lonely figure, that his relationships with mortal human beings can only ever be fleeting, and the bitter ramifications of this in the Doctor's relationship with Sarah Jane, who before Rose probably came closest to something resembling a love affair. The episode is remarkably tender; the show doesn't require a familiarity with the character (who first left the series in the 1976 story The Hand of Fear, itself newly out on DVD).

From here the series generally gets better and better, though to reveal more would deny first-time viewers the surprises they offer. The jury is still out on David Tennant's Doctor. The character is written and performed as essentially the same character with the same tics and eccentricities as in Series One, and to Tennant's credit he achieves a continuity that wasn't particularly attempted and even avoided in the original series, which gave incoming Doctors much latitude in putting their own particular stamps and personae on the character, changes further accentuated with often starkly contrasting costume changes.

Doctor Who - The Complete Second Series is like the first season presented in 16:9 enhanced format. The series is shot in Digital Betacam format, and apparently the PAL-to-NTSC conversion is the reason for the not-quite-perfect image, but otherwise episodes look great and, notably, all the video extras are 16:9 enhanced also. The 14 episodes are spread two-three at a time over five single-sided DVDs, with the sixth disc devoted to special features. (The "Children in Need" prologue episode runs seven minutes, while "Christmas Invasion" clocks in at 59 minutes. Subsequent shows run a standard 44 minutes. The Sci-Fi Channel apparently cuts the program for cable airings in the U.S.)

The Dolby Digital 5.1 mix is loud and makes great use of the format's possibilities in terms of its sound effects and generally excellent musical scores. Those listening to the program through their television speakers alone may have trouble clearly hearing all the dialogue through the riot of sound effects and pounding music, however. Optional English subtitles are available.

My one complaint, as with the BBC's classic Doctor Who DVDs, is that one has to wade through several minutes of unskippable animated menus that add nothing to the viewing experience but time. The animated menus for the new series are particularly detrimental because they draw from the program's main title music and visuals, thus lessening their impact when watching actual episodes. Let's hope this is dropped when The Complete Third Series comes to DVD.

As usual, this Doctor Who is crammed with supplements, so much so that only die-hard fans will want to sift through everything. There are deleted scenes, outtakes, commentaries, "video diaries" shot by Tennant and Piper, and another round of Doctor Who Confidential featurettes given its own separate disc.

New this time are "In-Vision" commentaries on "The Christmas Invasion," "The Girl in the Fireplace," "The Age of Steel," "The Impossible Planet," and "Doomsday," with standard audio-only commentaries on the remaining episodes. The "In-Vision" commentaries allow the viewer to see the commentators talk as well as hear them, which comes in the form of a rectangular insert supered over the lower right-hand corner of the image. This is of limited added value and problematic for owners of plasma screen sets: the stationary, bright blue border around the supered-in image tends to burn a shadowy box that lingers long after the commentary is over, so plasma TV owners will want to be cautious when viewing them. Unfortunately, it's impossible to listen to these commentaries without the added video.

At worst, Doctor Who - The Complete Second Series is about as good as the series that came before it, and it's as witty, scary, and suspensful as ever, if at times overly familiar and repetitive. It's still the best science fiction series on television right now, and for that matter as good as anything in any genre. Waffling consumers anxious to sample the show but put off by the high SRP need not worry. After just a show or two you'll likely be hooked for good.