The Criterion Collection // Unrated // February 13, 2007
List Price: $39.95 [Buy now and save at Amazon]
Review by Stuart Galbraith IV | posted February 6, 2007 | E-mail the Author
Sidney Gilliat and, to a lesser degree, Frank Launder's Green for Danger (1946), from the novel by Christianna Brand, is nothing more or less than a superb little mystery-thriller set in a country hospital near the end of the war. It does what virtually all great mysteries do: it presents a complex but logically-conceived puzzle to be solved, leaving clues in plain sight in a story that plays fair with its audience, yet is so cleverly conceived few will guess its outcome before the big reveal. Gilliat's screenplay, written with Claude Guerney, sticks closely to its source in terms of its rich characters, which the fine cast memorably enact with great wit and believability. Criterion's DVD offers a strong transfers and good extras without overdoing it. 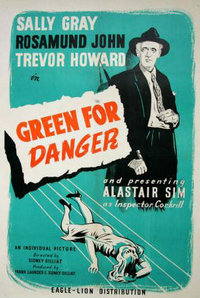 Narrated after-the-fact (and in the form of dictation) by eccentric Detective Inspector Cockrill - Alastair Sim in a droll, star-making performance - the essential mystery is established in the film's first few minutes, with Cockrill plainly explaining what is about to unfold. A seemingly ordinary postman, Joseph Higgins (Moore Marriott) will be murdered on the operating table, and that among those present in the operating theater - surgeon Dr. Eden (Leo Genn), anesthesiologist Dr. Barnes (Trevor Howard), theater sister Bates (Judy Campbell), and nurses Sanson (Rosamund John), Woods (Megs Jenkins), and "Freddie" Linley (Sally Gray) - include both the murderer and his (or her) second victim.

The first 35 minutes or so dramatize both murders with all the clues viewers need to solve the film's mystery clearly visible. Motives and means for each suspect is suspect is established, some of which may center around Freddie's broken engagement to Dr. Barnes, and oily ladies-man Dr. Eden's efforts to claim Freddie for himself.

Green for Danger's strengths are the ingenuity and tautness of its storytelling and its performances, especially Sim's, which is what anyone who has ever seen the film remembers most.

The film runs just over 90 minutes but is structured in such a way that it keeps viewers both keenly interested and off-balance throughout. By letting its audience know from the start that the murderer and his second victim are among the six present at the postman's death, the screenwriters keep their audience alert though in some respects it cleverly distracts them from obvious clues. Except for one outrageous red herring involving a twin sibling, everything proceeds logically and overall the story is very adult and, occasionally, darkly humorous and ironical.

Sherlock Holmes aside, Green for Danger was among the first movies mysteries to present a true anti-traditionalist detective, an acerbic, deadpan eccentric who makes no secret of the giddy joy he experiences being faced with two seemingly unrelated murders to unravel, and who clearly enjoys taunting his suspects with accusations. Sim's Cockrill has got Maigret's talent for outwardly casual, inwardly confrontational probing, combined with the quirks of Margaret Rutherford's Miss Marple. It's a marvelous performance, one that holds up to multiple viewings.

Green for Danger is presented in Criterion's much-criticized "window-boxed" format, with visible black bars on the left and right of the frame to ensure the entire image is visible. The black bars are neither extreme nor terribly intrusive, though this reviewer could do without them. (This decision also ignores the realities of 35mm projection, which tends to crop so-called "Academy ratio" films during projection anyway.) Transferred from a nitrate fine-grain master positive, the image is clean and clear, though viewers will note hairs in the film gate and other flaws that go back to the original negative. (Included is the picture's original British Board of Film Censors card.) The Dolby Digital mono audio, which directs its signal to the center channel on surround systems, is likewise above average, with optional English subtitles for the deaf and hard-of-hearing.

Supplements include a fine audio commentary by Bruce Eder, originally recorded for Criterion's laserdisc release. Eder was one of the first and best pioneers in this field, and his commentary holds up enormously well all these years later.

Also included is a very good interview with film scholar Geoff Brown, in 16:9 format that runs 14 minutes. Supplemented with choice stills and illustrative film clips, Brown provides background on the Gilliat / Launder team (who, among other things, wrote the screenplay to Hitchcock's The Lady Vanishes) along with censorship concerns, with Green for Danger preceding Doctor in the House and the Carry On films by several years, and its place in British cinema. Incidentally, Brown also helpfully points out the correct pronunciations of Gilliat ("jilly-a") and actor Genn ("jen").

There are no trailers - it would have been interesting to compare how the film was advertised in Britain vs. the U.S. - but the 17-page booklet offers a short list of credits; "Laughing While the Bombs Fell," a nice essay by Geoffrey O'Brien; and "Sidney Gilliat on Green for Danger," a brief essay that originally appeared in Geoff Brown's 1977 book Launder and Gilliat.

Green for Danger is a superb whodunit that mystery and classic British cinema fans won't want to miss, while Criterion's typically handsome DVD and supplements make the viewing experience all the more enjoyable. Highly recommended.