Fifteen years old Manolo (Jorge Sanz) and his eight years old brother Jesus (Lukas Martin) are sent to a remote sanatorium on the Spanish-Portuguese border where Franco's iron fist is barely felt. Surrounded by beautiful nurses and a mature but curious superintendent (Veronica Forque) Manolo can hardly resist what his body desires. Aside from the local priest and Emilio (Manuel Alexandre), the aging sweet talker who once roamed the streets of Paris, the youngster finds himself the only man in town.

Incapable of studying alone Manolo keeps a tiny log where he diligently marks each of his late-night onanistic experiments...until he meets Maria Jesus (Maribel Verdu), the daughter of the priest (!!). The young boy falls madly in love with Maria only to eventually have his heart broken in a most uncompromising manner.

Directed by award-winning Spanish director Fernando Trueba (Oscar winner Belle Epoque) El Ano de las Luces a.k.a The Year of Awakening (1986) is a great coming of age story about a boy who suddenly becomes a man in a country suffocating under Franco's regime. Mixing sex and humor with social critique Trueba's film should please both casual viewers as well as those looking for more serious entertainment.

While not as polished and scandalous as Louis Malle's Le Souffle au Coeur a.k.a Murmur of the Heart (1971) Trueba's film is certainly as naughty and frivolous. The jokes the main protagonists exchange are equally edgy and sarcastic, their behavior similarly outrageous. There are also some awkward parallels between the manner in which Malle's protagonist sees his bourgeois family and the double standards Manolo encounters in the sanatorium. Why is it that grown-up men live and cherish such hypocritical worlds?

Perhaps the greatest strength of The Year of the Awakening however remains its innocent way of looking at love. Whether it is Manolo and his passion for Maria or the old scoundrel Emilio and his adoration for literature the picture constantly reminds its viewers that love is everywhere, waiting to be found! 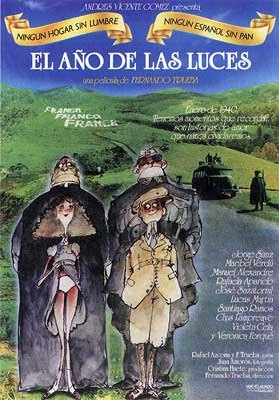 Presented in its original aspect ratio of 2.35:1 and enhanced for widescreen TV's the print delivered by WB-Spain looks good! Colors with a few minor exceptions from the opening scenes (10-15 min) looked well-rendered and contrast was rather acceptable. I did notice a few scratches during the opening credits but as the film progressed they all disappeared. On the other hand during the second half of the film edge-enhancement was a bit distracting and I thought that the image revealed some softness as well. The overall quality of the presentation however is indeed of satisfactory quality and I would not hesitate to recommend this disc to those interested in Fernando Trueba's work. This being said I would like to point out that the back cover of this Spanish DVD incorrectly states that the film is presented in an aspect ratio of 1.85:1. As already noted above this isn't the case, The Year of the Awakening is indeed offered with its OAR of 2.35:1. PAL-encoded, Region-2.

Presented with a Castellan 2.0 track and optional French, Portuguese, German, and English subtitles the audio treatment is very good. The dialog is very easy to follow and the supporting soundtrack comes off the speakers without any disturbing occurrences. I also must note that the English subtitles are of very high quality and I did not notice any improper syntax or spelling mistakes.

Aside from the original theatrical trailer, a photo gallery, and cast and director filmographies there is nothing else to be found here.

This is the first disc from a number of Spanish produced DVDs part of the Spanish Classics Collection courtesy of WB-Spain that we are going to review at DVDTALK. The Collection includes works by Carlos Saura, Fernando Trueba, Vincente Aranda, and Bigas Luna among others. An ebullient and sexy coming of age story The Year of the Awakening is an excellent opportunity to become familiar with the early work of one of Spain's most renowned directors before he achieved international success with Belle Epoque.