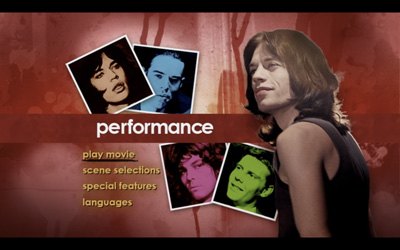 Chas is a brutal enforcer who is really good at his job. Played with a bluntly arched eyebrow by James Fox (recently seen as Mr. Salt in Tim Burton's Charlie & the Chocolate Factory), he works for a homosexual East London crime boss named Harry Flowers (Johnny Shannon). Chas is the guy Harry sends round when he wants to convince other people to his way of thinking, because Chas has a knack for getting his point across. When the thug goes against Harry's instructions and deals with a business matter in a personal way, though, he finds there are some situations he can't talk or shoot his way out of.

On the run, Chas overhears a conversation about a basement apartment that he can con his way into leasing. Things aren't as clear-cut once he is inside the house, however. It turns out that the landlord is a faded pop star named Turner, here played by Mick Jagger. Turner is a recluse, creating a pansexual hideaway with his drugged-up girlfriend Pherber (Anita Pallenberg, the real-life girlfriend to Mick's guitarist, Keith Richards) and a few other androgynous moppets. Before long, it's not clear who is running a con on whom, as Chas is suddenly on the same psychedelic trip as everyone else in the house, searching for Turner's "demon," the artistic muse that once drove him.

Performance was made in 1968 and held back for two years while Warner Bros. tried to figure out what to do with it. Co-directed by two first-time directors, Nicolas Roeg (Walkabout, also the D.P.) and writer Donald Cammell (The Argument), Performance is a classic of the trippy midnight movie genre. I'm not normally a fan of Roeg's, I find his weirdness to be meandering and pointless for the most part, but something about the collaboration with Cammell gave their artistic vision a laser-like precision. Performance is really the clash of several genres. Chas' gangster society has tints of kitchen sink drama while also playing with the conventions of classic British crime pictures. Cammell saw a kindred spirit between the swaggering street toughs of old films and the new outlaws of rock 'n' roll. Performance grows from the thesis that if you pushed these cultural rebels toward one another, you'd suddenly have mirror images in the center.

This is something that the directors make great visual use of. For a drug-fuelled movie of the late '60s (Pallenberg openly disperses chunks of magic mushrooms, and there is no mistaking those funny shaped cigarettes), they avoid the usual pictorial cliché of other hallucinogenic flicks. There are no lava lamps or fish-eye lenses. The surreal journey of Performance is an existential one, it's all about identity. The first act sets up a dicey world. Focusing entirely on Chas' brutal routine and flight from the same, it's edited in a choppy fashion, juxtaposing attacker and victim, and messing with time. This is said to be the uncredited work of editor Frank Mazzola, who would go on to make this his signature style and influence the entire video music genre in the process. In this outing, it keeps the action moving while putting the audience on shaky ground. The blood and the sex and the violence come like a rapid assault we are powerless to stop.

Yet, as Turner's introduction approaches in the story, the filmmakers are already inserting him in the mix, giving us quick tastes of what is to come, already breaking down any separation between gangster and idol. This melding begins in earnest once Chas is in Turner's home. Mirror images, double exposures, and other visual tricks are employed to start to suggest that Chas is Turner and Turner is Chas. They even engage in a bit of dress-up, most notably in the "Memo from Turner" music sequence where Chas' earlier drama with Harry is replayed with Jagger in the lead, instructing his underworld minions through song. Here Jagger moves from slinking panther to something more forceful, just as the events leading up to it show James Fox losing his edge and drifting in a narcotic haze.

Where both men end up is the subject of much debate and probably a matter of personal preference, but suffice to say there are curves on the path to complete fusion. Chas needs Turner's house to protect him from those that would do him harm, whereas Turner needs Chas' visceral lifestyle to break him out of the constipated mental funk that has arrested his creative process. Roeg and Cammell may end the movie by showing a lot of doors being closed, but from a plot standpoint, they leave many open to interpretation. Some of you out there may find the trickery maddening, but if you put yourself in Chas' shoes and let Performance slip you a mickey, you might find the experience...well, I wouldn't go so far as to say transformative, but how about inspiring? 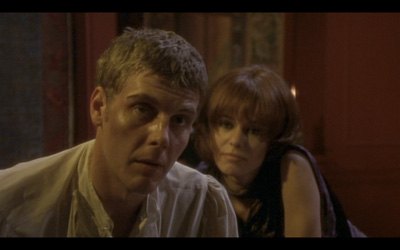 Video:
This first-ever DVD of Performance has a "matted" widescreen transfer. It looks to me that a lot of care was put into achieving the proper look of the movie, with an effective contrast between the slightly washed-out color of the hazy interiors and the stark reality of the exterior scenes. The picture quality is perhaps most noticeable when you see the scenes that were shot in low lighting with a handheld camera (namely, some of the sex scenes). When you see shots that have scratches and spots built in, it shows you just how clean the other scenes are.

Sound:
The digital mono mix, on the other hand, can be a little too tinny, making some of the thicker accents a little hard to make out at times. The music sounds pretty good, though.

There are English subtitles available, as well.

Extras:
There isn't a lot of bonus material on offer. There are two very short vintage extras. The theatrical trailer is kind of fascinating, because it actually does a pretty decent job of selling the movie in a frank way. On the other hand, the promotional reel "Memo from Turner," which runs just under five minutes, plays like the marketing department was trying to soften the blow of Performance for the squares. It shows footage of Jagger on the set and recording music and uses a voice over to try to sell him as an artist who is more than his bad-boy reputation would have you believe. A good portion of it is given over to the "Memo from Turner" performance, though cleaned up for general audiences. (Except the word "faggy" is retained in the lyrics for both the trailer and this promo, something that wouldn't fly today.)

In addition to these, there is a brand new documentary, "Influence and Controversy." At just under twenty-five minutes in running time, it's a rather informative piece, running through script development, casting, and the shared directorial process, and then through the difficulties with the movie's release and the lasting effects of the picture. The cast is represented only by Anita Pallenberg, and Nicolas Roeg also doesn't appear (Donald Cammell is no longer with us), but the film's producers Sanford Lieberson and David Cammell, the camera operator, and both editors, Anthony Gibbs and Frank Mazzola, talk about their involvment. Jack Nitzsche's son also speaks briefly about his father's musical score, and a film critic/professor is brought on to go over the larger meaning of the movie. As these things go, it makes for a satisfying supplement to the main feature.

FINAL THOUGHTS:
Highly Recommended. Much like the way Turner and Pherber try to dig under Chas' skin, so will Performance dig under yours. Its style and message may be a product of the 1960s, but the deeper questions of identity and the nature of man's impulses will always be timely. First-time directors Nicolas Roeg and Donald Cammell bang two worlds together, showing the clash through character, image, and even acting style. While the conclusion might leave you scratching your head, the itch gets more and more intriguing the longer you fiddle with it. 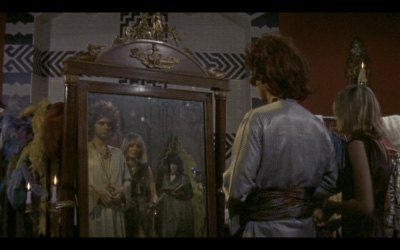