BCI Eclipse // Unrated // February 20, 2007
List Price: $24.98 [Buy now and save at Amazon]
Review by Stuart Galbraith IV | posted February 12, 2007 | E-mail the Author
A repackaging of three Shinichi "Sonny" Chiba movies all previously released to DVD, Lethal Chiba offers three mostly enjoyable, bone-crunching action films with excellent transfers at a relatively low ($24.98) SRP. If you have them already they'll be no point in getting this set, but if you've passed up to now it comes highly recommended. 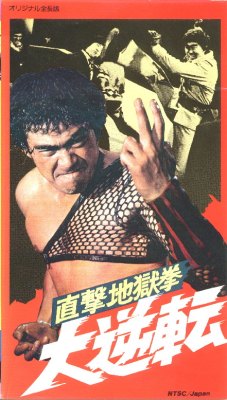 Directed by Teruo Ishii (the Abashiri Prison series, Horror of a Deformed Man), The Executioner is near-perfect escapist entertainment: it's got plenty of exciting action, sardonic humor, and outrageous cartoony violence. Chiba's ninja climbs walls with the agility of Spiderman, and in a typical, queasily over-the-top early scene is trained by his grandfather-sensei to dislocate his feet and arms when tied up by opponents. (The film's most audacious moment comes when, in battle, Koga violently rips a bone right out of his opponent's rib cage.)

What makes The Executioner memorable however is that it strikes just the right balance of humor and gravitas, and that the alliance between the three leads, Ikebe's disgraced commissioner and his playful nice is so engaging and likeable - with Chiba's enthusiastic ninja expert nicely contrasting Go's adolescent punk and Sato's stylish, experienced assassin.

The Executioner was, alongside the Ken Takakura-starrer Third Generation Naming Ceremony (San daime shumei) Toei's top-grossing film that year with the two pictures tying for fifth place among the year's domestic releases. In those days Toei had a bad habit of rushing sequels to hit films into production without any consideration for quality, and such was the case with Karate Inferno: The Executioner II (Chokugeki jigoku-ken: Dai-gyakuten or "Direct Hit! Hell Fist: The Big Counterattack") which was conceived, shot, and in theaters barely four months later. Though it happily reunites the cast while adding Tetsuro Tamba and Etsuko "Sue" Shihomi to the mix, the picture is a gloppy, unappetizing, extremely chaotic mess, playing very much like it was improvised on the spot, which it might very well have been. Toei really blew it; what might have been with careful planning a hit series of films that might have gone on for years ended here.

This time the gang of antiheroes are out to recover the "Star of Pharaoh," a colossal diamond worth one billion yen, along with the owner's kidnapped daughter. The screenwriters, assuming there were screenwriters, ignore or were perhaps unaware of what made the first picture so appealing. The sequel completely disregards the individual talents and, for the most part, character quirks of Koga, Hayabusa, and Sakura as seen in the first movie. Here, they're more like the Three Stooges, and the sardonic humor of the first film gives way to a tsunami of broad slapstick, in-jokes, and flatulence-type humor. Indeed, the film revels in its adolescent smuttiness: every bodily function out of every orifice gets its own sight gag. One allegedly comic highlight has various characters putting dandruff and snot into their compatriots' drinks.

The film abounds in references to other movies. Sato pilots a Cessna incongruously dressed as a World War II era flyer, a reference to his countless roles in that genre for Toho and Daiei (I Bombed Pearl Harbor, Attack Squadron!, etc.) while Kanuro Arashi turns up at the end reprising his role from the Teruo Ishii-directed Abashiri Prison movies. None of these jokes and references are particularly funny, though Japanese movie fans may find them amusing.

The great haste in which Executioner II was thrown together is especially obvious in Shihomi's role as Tamba's secretary, who literally turns up out of nowhere at the climax. Ishii reportedly didn't want to make the sequel, and his disinterest is apparent in the film's general sloppiness. One sequence that has Chiba hanging from a balloon over Ginza mixes shots of Chiba dangling from a crane whose shadow is visible much of the time, with some of the worst rear-screen process work ever.

The villains in both films are hairy, dirty gaijin (foreigners) with sluttish, skanky white trash girlfriends. The most conservative of Japan's studios with ties to both yakuza and ultra right-wing politicians, Toei's vaguely xenophobic, love-hate attitude toward foreigners plays hilariously overdone in retrospect, though one has to wonder just where the films' casting directors found such motley-looking white people, among them in a bit part, familiar gaijin Yuseph Osman (Mothra).

But if comic book gaijin are villains of convenience, The Killing Machine (Shorinji kenpo, 1975), an action-melodrama in theaters just 10 weeks after The Executioner II's premiere, is awash in overt anti-foreigner racism. The story's focal point is Doshin So (Chiba), a Shaolin master and Japanese Secret Service agent in Manchuria who single-handedly tries to restore honor to postwar Japan, its theme made plain in a compliment paid him by a police chief (Tetsuro Tamba) who says, "As long as Japan has you, there's hope."

A one-man army who takes out a platoon of Chinese in the opening reel, Chiba's So beats up Korean thugs, unapologetic American G.I.'s who nearly kill a small boy with their Jeep in a hit-and-run accident, and Japanese yakuza whose dance club caters to American soldiers openly making out with unfortunate Japanese girls. In perhaps the film's most blatant if slyly dramatized bit of racism, a subplot finds war veteran Otaki (Makoto Sato), who lives like a "ghost" after being officially reported dead, learning that his missing wife has remarried -- to a Korean. Though he admits to his wife that the new husband seems to be a "good man" the implication is clear: in the wake of Japan's humiliating surrender, Otaki is forced to swallow the bitterest pill of all.

In the years following Japan's defeat, So recruits a veritable loyal forty-seven of disciples, including Otaki, another disgruntled veteran, Tomoda (Naoya Makoto, of Tsuburaya Productions' "Fireman" series), and his kid sister, Miho (Etsuko "Sue" Shihomi). So, meanwhile, cares for a young woman (Yutaka Nakajima, in a good performance, quite a different role from her Executioner movies) raped by Russians in Manchuria, and her brood of orphans, whom for a time So had played a Fagin-like role.

Racism aside, the Norifumi Suzuki-directed film is undeniably compelling and delivers the goods in terms of violent action. Most outrageous is a wish-fulfillment revenge scene where So castrates the rapist of a young girl, tossing the dismembered organ aside which a stray dog, looking for a meal, dives into with great abandon.

All three transfers in Lethal Chiba look fantastic. All are sparkling, near-flawless 16:9 enhanced jobs that do justice to their Toeiscope lensing. The English subtitles that accompany the 2.0 Dolby Digital mono tracks are extremely well done. The Killing Machine adds a simulated 5.1 remix, and The Executioner sounds like faux stereo also, but I'd recommend sticking to the original mono sound. English-dubbed versions are not offered, not are they needed.

The only thing in the way of supplements is a collection of trailers, for this trio plus a batch of other Chiba titles, also available on DVD. It's too bad Adness/Ronin Entertainment didn't opt to include a booklet along the lines of what had been done for their Sister Streetfighter Collection.

If you're a fan of Japanese action films then you won't want to miss this bargain-priced, pristine-looking set of titles that for years were only available as blurry bootlegs. Highly Recommended.