NoShame Films // Unrated // January 16, 2007 // Region 2 // PAL
List Price: $18.00 [Buy now and save at Kultvideo]
Review by Stuart Galbraith IV | posted February 14, 2007 | E-mail the Author
While NoShame's American arm has been distressingly quiet in recent months, its Italian branch is teasing us region-oners with a special edition DVD of Caltiki, the Immortal Monster (1959), a Region 2/PAL release under its original title, Caltiki - il mostro immortale. The picture was apparently that country's only giant monster-on-the-loose movie of the 1950s; more importantly, its special effects were supervised by future genre maestro Mario Bava. The film is officially credited to "Robert Hampton," actually a pseudonym for Riccardo Freda of I Vampiri (1955) fame, but like that seminal horror film Bava is said to have directed a large portion of the first unit footage as well, virtually the entire film according to some sources. Exactly how much of Caltiki is Bava's and how much is Freda's is difficult to say - where's that Tim Lucas audio commentary when you need it? - but much of it undeniably bears Bava's stamp. Similar in structure to the Nigel Kneale / Val Guest film of The Quatermass Xperiment (1955), the film is a taut, 73-minute thriller, and looks nothing like the visually flat, so-called semi-documentary style look of most American sci-fi films of the period. Rather, visually it's more of a bridge between film noir in the (cinematographer) John Alton mode, and the limitless imagination and ingenuity Bava would soon be applying to his own, "official" movies. 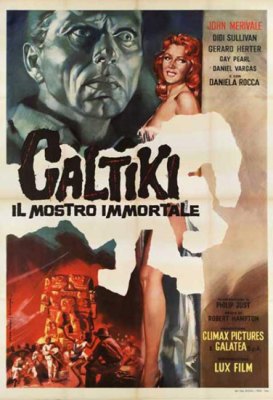 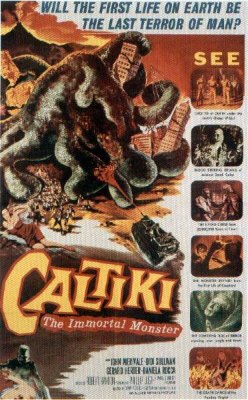 The film is set in Mexico and starts with a distinctively Bavaesque bang, with an archeologist dashing through the jungle, thick with Mayan ruins (Bava's superb matte work/glass paintings) while in the distance a volcano erupts (also a good effect). A band of archeologists led by Professor John Fielding (Canadian John Merivale) is looking for reasons the Mayan civilization collapsed so abruptly. They eventually stumble upon a temple in a cave overlooking an underground lake. One of the members of the expedition dives to the bottom, finding pre-Columbian gold and jewelry, along with picked-clean human skeletons. Lots of skeletons.

Greed gets the better of the man, who unwisely opts for a second dive, only to be semi-absorbed by Caltiki, "a Mayan divinity" that melts the man's face into a goopy mess, exposing his skull, while another fortune hunter, Max Gunther (Gerard Herter), nearly loses his arm to the immortal monster.

The bulk of the picture involves Max's unstoppable physical and mental deterioration (much like astronaut Victor Carroon in The Quatermass Xperiment) and Fielding's efforts to contain the menace, which grows exponentially when exposed to even the tiniest amount of radiation. In a clever bit of writing, Mayan soothsayers have in temple inscriptions predicted that Caltiki will destroy the world when its "mate appears in the sky." (Mild Spoiler) This turns out to be a comet that approaches earth's orbit every 1,300 years or so, and that the radiation it showers into the atmosphere will provide Caltiki with an immense source of energy. In the end Caltiki becomes a colossal heap of what looks like pulsating tripe.

Filippo Sanjust's screenplay crams a lot of incident into Caltiki's brief running time, though much of it is derivative and none of the characters are particularly compelling, though Merivale's thoughtful, Stanley Baker-like presence is a good match for the material. Herter, however, is quite hammy (albeit it entertainingly so) as Max; future genre star Giacomo Rossi-Stuart (Kill, Baby...Kill!, The Last Man on Earth) turns up in a small role as a lab assistant.

Rather, what people remember about Caltiki is its extremely effective, sometimes horrifying visuals, particularly Bava's gruesome makeup effects, which were without precedent in their nauseating graphicness by 1959 standards (beating Nobuo Nakagawa's gore-fest Jigoku by a year). Caltiki's touch melts people's skin into goop with the sticky tactile quality of peanut butter. In one particularly grisly moment, archeologists gingerly lift off Max's torn shirt sleeve - what's underneath is a stringy goo of melted skin and muscle leaving not much more than exposed bone.

Bava's matte work and/or glass shots are nearly flawless; many viewers have wrongly assumed the picture was actually shot in Mexico, near real Mayan ruins. Less convincing are his miniature effects, which are impressively detailed and expertly lit (the latter essential in making such shots convincing), but often look phony, partly because the use of real flames give away their true size.

Caltiki - il mostro immortale is presented in a pleasing 16:9 enhanced transfer with modest black bars on the sides of the image to preserve the film's original 1.66:1 theatrical aspect ratio. The framing is critical; a little more or less cropping would've hurt the careful compositions. Despite a couple of splices and reel change cues, the 35mm source is clean and impressively sharp if a tad dark and contrasty, though it's possible the picture may always have looked this way by design. The original Italian track unfortunately isn't subtitled, but the DVD does include an alternate English audio track; both are Dolby Digital mono. As was common in Italian films produced with the import market in mind, the leads say their lines in English anyway, thus minimizing lip-synch issues. (Fielding's daughter, however, is painfully dubbed by an adult badly imitating a child's voice.) A print seems to have been sourced for the English audio, which twice deletes a few seconds of dialogue at reel changes.

The disc is loaded with supplements, most however are in Italian without English subtitles and thus of limited value for those not fluent in Italian. These include a brief introduction by Stefano "Steve" Della Casa; an audio commentary by Luigi Cozzi and Giona A. Nazzaro; and two interview/documentaries: Riccardo Freda, maestro dimenticato ("Riccardo Freda, Forgotten Master") and La genesi di Caltiki ("The Genesis of Caltiki").

Also included are the Titoli di testa versione USA ("Opening Titles for the U.S. Version") and the American trailer. Both are on the murky side, but okay. Native English-speakers can also enjoy the DVD's photo gallery.

Finally, there's a handsome 14-page booklet, in Italian only, alas, Riccardo Freda: Il magnifico regista ("Riccardo Freda: The Magnificent Director"), which offers a brief biography; a short essay entitled "Il mio amico Mario" ("My Friend Mario") reprinted from a 1981 article; "Mille comparse o un attore?" ("A Thousand Appearances or an Actor?"), a conversation with Freda from 1993 that's the booklet's centerpiece; a complete Freda filmography; and finally both American and Italian credits for Caltiki.

A longtime, gaping hole in the Bava DVD library, NoShame's Italian release of Caltiki - il mostro immortale is most welcome. One hopes an official Region 1 release will turn up eventually, one that carries over the disc's extras while adding additional supplements by Tim Lucas and others. Until then, Bava (and Riccardo Freda) fans need wait no longer.