International - HKFlix.com // Unrated // December 7, 2006 // Region 3
List Price: $17.99 [Buy now and save at Hkflix]
Review by Stuart Galbraith IV | posted February 16, 2007 | E-mail the Author
Despite the presence of former Sister Streetfighter Etsuko "Sue" Shihomi, and the knowledge that it was on the set of this film where she fell in love and eventually married her co-star, actor-singer Tsuyoshi Nagabuchi, Tora-san's Bluebird Fantasy (1986) is a decidedly lesser Tora-san film. Though still fitfully charming and never dull, its screenplay introduces some intriguing ideas involving Shihomi's character that are abandoned, while Nagabuchi's would-be artist is curiously unappealing. 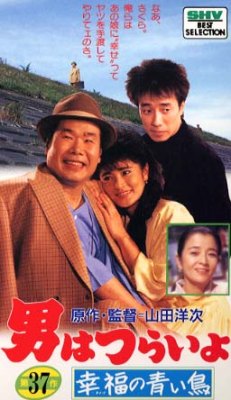 
Released in Japan as Otoko wa tsurai yo - Shiawase no aoi tori ("It's Tough to Be a Man - The Bluebird of Happiness," this 37th of 48 installments opens with itinerant peddler Torajira Kuruma, better known as Tora-san (Kiyoshi Atsumi), selling his way from Yamaguchi to Kyushu prefectures. He stumbles upon an old, traditional Japanese theater he'd visit when in the area, one that was packed with happy workers before the coal mine in the area shut down. He learns that a favorite actor - and fellow itinerant and drinking buddy - has recently died, and nostalgia for his performances and their friendship compels him to pay his respects to his adult daughter, Miho (Shihomi).

Miho is delighted to see Tora-san: as her father's daughter, she was part of the same traveling theater troupe and has fond memories of Tora-san all those years ago. (Tora-san specifically recalls a performance by the father dating back to 1963, suggesting a whole series of adventures Tora-san might have had before the film series began in 1969.)

When Tora-san returns to his family's sweets shop in Shibamata, in Tokyo, he's preceded there by Miho, who's trying to decide what to do now that she's all alone in the world. Arriving in Tokyo, Miho develops a fever, but is looked after by an eccentric stranger that comes to her aid, Kengo (Nagabuchi), a failed artist reduced to painting signs that hang outside "Roman Porno" movie theaters. Kengo is something of a punk, very non-conformist and annoyingly gabby, with dwindling ambitions to make it as a real painter, but years of painting movie theater signs has, in his words, corrupted his art. Despite his bellyaching, Miho is attracted to him, and he to her.

Meanwhile, Tora-san and his family - sister Sakura (Chieko Baisho), her husband, Hiroshi (Gin Maeda), and Tora-san's aunt (Chieko Misaki) and uncle (Masami Shimojo) - are warm and welcoming toward Miho, and help her get a job working at a ramen/Chinese restaurant (the owner is played by Senri Sakurai).

Tora-san's Bluebird Fantasy did well at the box office, placing seventh on the list of top domestic releases for 1987, but is more famous today as the film were Etsuko Shihomi met her husband. They married the following year and she promptly retired from acting and public appearances altogether, refusing even to talk about her career, though he continues to perform concerts and act occasionally, often playing yakuza types.

In these films Tora-san often plays matchmaker, both by design and inadvertently, but here Miho and Kengo's burgeoning relationship has little relation to the doings of Tora-san and his family and neighbors. Disconnected from that story, the script doesn't give Tora-san or any of the continuing characters much to do. Tora-san's relationship with the old actor and the similarly wandering nature of their respective careers is intriguingly played out in early scenes. Miho is introduced as a talented singer once connected to that old world they shared, but this doesn't lead anywhere either.

Nagabuchi and the character he plays don't come off well. Though the character feels authentic, much of it based on Nagabuchi's own life (both are from Kagoshima, for instance), Kengo is little more than a talkative punk wallowing in his failed attempts to make it in the art world. His eccentricities are intended to be amusing, but instead the character comes off as the worst possible match for Miho, who deserves someone better.

Complaints aside, the film does have its share of fine moments, such as how like wildfire word spreads in Shibamata that Tora-san has fallen in love yet again, and his nostalgia for a dying breed of live entertainment are terrific.

Regrettably, Tora-san's Bluebird Fantasy is another 4:3 letterboxed job and is not enhanced, this despite several recent entries that were released 16:9. It's an okay transfer otherwise, with generally good subtitles. The mono sound is adequate, as are the imperfect but acceptable English subtitles. Optional Chinese subtitles are also available.

None really, as supplements are limited to the booklet and onscreen director's biography and filmography (in both Chinese and English).

Those familiar with actress Shihomi only for her butt-kicking action thrillers at Toei will be surprised by her delicate work in Tora-san's Bluebird Fantasy, and fans of the series won't be too disappointed, but it falls well short of the best entries. Still, it's recommended.