I'll tell you what's new, Scooby-Doo: I don't see the name Hanna-Barbera anywhere on these cartoons. Well, that's not entirely accurate. They do mention the legendary Hanna-Barbera studios in the end credits, but it was a surprise for me to see Bugs Bunny standing there at the beginning of these cartoons, chawing on a carrot while leaning smugly against the big WB logo. It was as if two of my childhood cartoon worlds had collided. Like any kid in the 70s, I was brainwashed with endless repeats of the original Scooby-Doo, Where Are You!, but I missed this particular incarnation of the venerable pop icon cartoon, now entitled What's New Scooby-Doo?, when it premiered on the WB's Kids WB programming block in September, 2002. Watching it with my kids today, the two-disc What's New Scooby-Doo?: Complete 1st Season didn't erase the memories I had of the original, but enough respectful homage was paid to William Hanna and Joseph Barbera (and by extension, to the cartoon's original creators Joe Ruby and Ken Spears), that I found myself rather liking this new version. 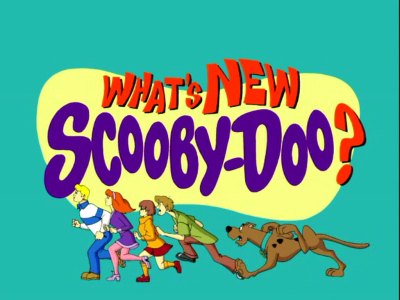 Okay, What's New Scooby-Doo?: Complete 1st Season may not be as good as the original, but so what? The animation, although reminiscent of the older drawings, isn't nearly as evocative. The scripts aren't as good (but let's be honest; the originals weren't exactly Mamet, either). And some of the modern tweaking left me a little cold (Freddy without his ascot, Scooby not talking as much). But at least they didn't add any "helpful" new characters; it's still the same gang from 1969's Mystery, Inc., and for the most part, they still fulfill the same character functions. Fred is the de facto leader of the group, providing the brawn, if you will (which he never really uses). Daphne is...well, Daphne. She's beautiful and smart, with a knack for delivering the wrap-up exposition. In this version, she's also markedly more competent in her crime detecting skills. Velma is still the main brain of the group, and of course Scoob and Shaggy are the comedy relief.

The producers of What's New Scooby-Doo?: Complete 1st Season made the smart choice of keeping Casey Kasem as Shaggy and Frank Welker as Freddy (Welker also voices Scooby here, because Scooby's original voice talent, Don Messick died in 1997). As long as those two are doing the voices, any Scooby incarnation will have validity. The producers also wisely keep Scooby and Shaggy, the most popular members of the group, exactly the same in temperament and action. Shaggy's still always hungry, and so's Scooby. Shaggy is still always scared, and so is Scooby. And they both still have their senses of humor, even in the face of certain death. In the episode called She Sees Sea Monster at the Sea Shore, Shaggy, afloat in the water and clinging to Scoob, with a giant sea serpent bearing down on them, says, "I'm just sorry it had to end this way." Scoob asks, "Rhat ray?" And Shaggy answers, "On an empty stomach!" and starts laughing with Scoob. That's a classic moment, totally in tune with the original character development from the first series, and it shows the commitment of What's New Scooby-Doo?: Complete 1st Season to preserve that beloved tradition.

As well, music still plays a vitally important role in What's New Scooby-Doo?: Complete 1st Season, just as it did in the first Scooby cartoon, and I must say they did a pretty good job of it. The new theme song by Simple Plan is catchy as hell, and other incidental music and songs provided by the likes of The Ramones (wrap your head around that one), Lindsay Pagano and JC Chasez are fine. There's a lot of purists out there that say how dare they change the theme, but it's important to remember that the first Scooby-Doo was totally of its time, using then-popular folk-rock music to get the attention of its young viewers (I remember my old man telling me to "turn that hippie crap off!" when he heard the original theme). Hanna-Barbera weren't dumb; they knew new music would grab kids, and make their cartoon crime solving gang seem hip. So there's nothing inherently "evil" or "corporate" in the producers of What's New Scooby-Doo?: Complete 1st Season putting new, hip music to the old characters. That's just what Hanna-Barbera did. 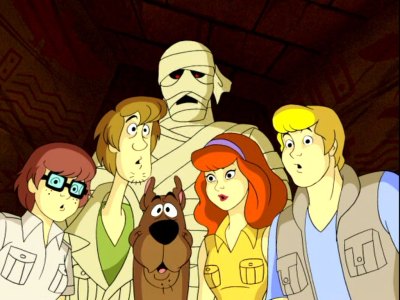 
There's No Creature Like Snow Creature
The gang travel north to catch a snow boarding competition, but find themselves at the mercy of a huge snow beast. Olympian Chris Klug shows up as a guest star.

Big Scare in the Big Easy
A New Orleans graveyard is the site of a night duel between scary ghosts!

Riva Ras Regas
Guest star Lindsay Pagano plays herself here, but she's too scared to perform at the haunted theatre -- until the gang shows up to help. Rip Taylor makes a voice appearance as "Mr. Wacky Pants" -- enough said. 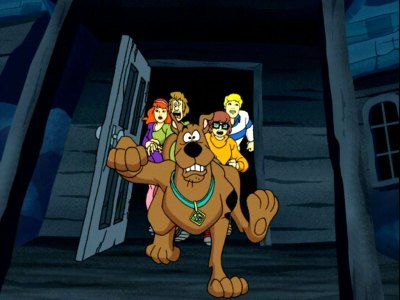 
Safari, So Goodie!
Animals start glowing yellow when the gang goes on safari.

She Sees Sea Monster at the Sea Shore
Smash Mouth makes an appearance as the gang battles a deadly sea serpent.

Toy Scary Boo
The toys are taking over the toy store, and it's up to the gang to figure out what's going on. Billy Mumy, Teri Garr, and Kevin MacDonald make vocal appearances here.

Lights! Camera! Mayhem!
A big purple phantom threatens to shut down production of "Spy Me a River."

Pompeii and Circumstance
A zombie gladiator is causing volcanic eruptions in Italy, and the gang hurries over there to help. Mark Hamill does a vocal appearance here.

The Unnatural
Mike Piazza shows up as himself, and Kathy Griffin makes a vocal appearance in this tale of a haunted baseball stadium. 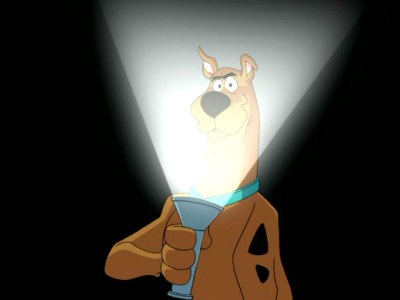 The Audio:
The Dolby Digital English Surround Stereo soundtrack isn't all that active, but it's good and loud.

The Extras:
There's a bonus Scooby episode, 2005's A Scooby-Doo Valentine from the third season, that's included to replace the missing Scooby-Doo Christmas episode that aired in December of 2002 (why that episode is missing, I don't know). Harland Williams and JC Chasez show up. As well, there's a Backstage Bloopers with Scooby-Doo bonus that frankly, makes no sense. It's detailing some bonus feature about baseball tips that was shot at Warner Bros., but that featurette isn't on this disc, so I don't know why the so-called bloopers are included. There are also trailers for other Warner kids' shows on DVD included here.