International - HKFlix.com // Unrated // November 13, 2006 // Region 3
List Price: $17.99 [Buy now and save at Hkflix]
Review by Stuart Galbraith IV | posted February 19, 2007 | E-mail the Author
Though the great Japanese director Yasujiro Ozu made seven film before it, Days of Youth (Gakusei romansu - waka ki hi, or "Student Romance - Days of Youth," 1929) is the earliest of his films to survive the war, neglect, and nitrate deterioration. Many of Ozu's earliest films were comedies, often about student life, and this falls neatly into this category as its title makes explicit. The picture is quite enjoyable, easy to follow and influenced by Hollywood comedies, particularly those of Harold Lloyd (especially The Freshman and Girl Shy). Panorama's DVD of this silent film is a bit of a chore, however: like that label's Dragnet Girl, the DVD is without any audio accompaniment at all. There's no music track, no benshi narration (benshi being a style of silent film narration particular to Japan and an art form all its own), nothing. After an hour of dead silence, one longs even for the whir of a movie projector. On the other hand, the 103-minute film seems complete and is shown at the proper speed, and though it shows signs of damage, it's in pretty good shape all things considered. 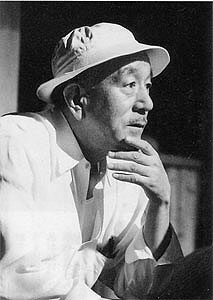 The story is simple: two university students vie for the same virginal sweetheart, Chieko (Junko Matsui, whose dimpled smile suggests Ame agaru's Yoshiko Miyazaki). Watanabe (Ichiro Yuki) is a lazy rogue, irresponsible and crafty. As the film opens he advertises that his room is for rent, but keeps lying to interested parties that the place is already rented; he's holding out for a beautiful girl to flirt with. He eventually rents the room to Chieko, and decides the best way to win her heart is to stalk and annoy her until she falls in love with him.

Meanwhile, Watanabe's long-suffering friend, shy and bookish Yamamoto (Ozu regular Tatsuo Saito, later familiar for his work in Hollywood productions filmed in Japan, 1962's My Geisha for example) has fallen for Chieko as well, he with his round glasses very much in the Harold Lloyd mold of youthful enthusiasm and crippling shyness.

The three eventually meet up on a ski trip after Watanabe and Yamamoto take their exams, and like the Lloyd comedies the bulk of the film has gentle Yamamoto trying to romance Chieko, only to be thwarted at every turn by Watanabe, whose actions only cause him one embarrassment after another. Quite unlike Lloyd's persona, however, Yamamoto is a man of undying, Herculean patience; Japanese culture is rooted in a social structure where one is expected to put up with the selfishness of their friends and neighbors, even one as scurrilous as Watanabe. Lloyd would certainly have mustered the courage to throttle the jerk in the final reel.

Days of Youth has many moments that would not be out of place in an American silent comedy. One early scene has Watanabe leaning against a lamppost with dripping wet black paint. This leads to some very funny stuff where, on a kind of date with Chieko, he tries to hide his blackened palm which gets paint everywhere.

The film is a fascinating document of its period, when men wore western-style hats with their kimono, and before Japanese militarism put a halt to American imports. (In Yamamoto's room, adorned with pennants from American universities, he and Watanabe eat "Libby's [canned] California Asparagus.")

Days of Youth appears is derived from a 35mm nitrate source that was well on its way toward complete deterioration. It's watchable, but during much of the film there's snow-like flashing (not too out of place in the ski slope scenes) but the image is reasonably sharp and the film is shown at the proper speed. The film's Japanese inter-titles come with optional subtitles in English and Chinese.

As with Dragnet Girl, the complete absence of sound of any kind is unfortunate. The Region 2 NTSC release in Japan makes no mention of a music or recreated benshi track, so unless Eureka, the BFI, Criterion or some other label decides to release these silent Ozus, this is the best it's going to get. (And once again, the presentation absurdly opens with the usual Dolby Digital helicopter fly-over.)

Days of Youth is an enjoyable and accessible if somewhat overlong comedy that exemplifies Ozu's early career. Despite some shortcomings in the presentation, Panorama's DVD is worth seeking out. Recommended.