Paramount // Unrated // March 6, 2007
List Price: $49.98 [Buy now and save at Amazon]
Review by Stuart Galbraith IV | posted March 1, 2007 | E-mail the Author
One of TV's best and most enduring cop shows, Hawaii Five-O (1968-1980) was unusual in many ways and unique in others. Compared with similar shows of its era, Hawaii Five-O was more adult, more political, and certainly more violent. It was both a police procedural cop/detective show dealing with local crime, but frequently its scripts also veered into international espionage territory. As it proudly boasted in its end credits, Hawaii Five-O was filmed entirely in Hawaii - no backlot streets or rear-screen beaches for this show. Despite this, from the beginning the series contrasted the tropical paradise of hula dancers and luaus enjoyed by mainland and foreign tourists with the poverty of islanders, native Hawaiians especially. Still, the natural beauty of the state is on full display, and CBS / Paramount's boxed set offers some of the best-looking transfers of a classic TV show this reviewer's yet seen. The series may nearly be 40 years old but, Jack Lord's trademark triple-black 1968 Mercury Park Lane Brougham aside, on DVD it looks almost brand-new. 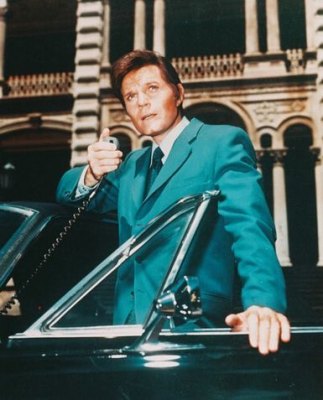 In the 96-minute pilot, "Cocoon," the series established how this state-run organization and its geographical position in the Pacific provides a crucial assist to national intelligence - and this first episode established its most popular recurring villain, special Red Chinese agent Wo Fat. Played with articulate amusement by Khigh Dhiegh, the character was inspired if derivative: Dhiegh in all but name was reprising his character from John Frankenheimer's superb adaptation of Richard Condon's The Manchurian Candidate (1962).

With a few minor missteps, "Cocoon" established everything that was great about Hawaii Five-O. The intelligent, methodical nature of Steve McGarrett's investigations, his demanding leadership (he expects nothing less than the best from his hard-working staff), a willingness to lock horns with other agencies, suspects, etc. that impede his job and authority, and a wry, understated amusement when his unpredictable actions infuriate those working against him. (One early show, for instance, has McGarrett on the beach listening to Phillip Pine's annoyed attorney complain about his independently-minded client. McGarrett listens patiently then casually gets in his car and drives off, leaving the lawyer stranded.) Throughout the series McGarrett remained somewhat enigmatic, but intriguing little references about his past and personality quirks slip through here and there.

(The pilot includes an extended version of the series iconic opening titles**, and features different actors playing Danny and the Governor. Danny in this show only is played by Tim O'Kelly, the sniper from Targets, with Lew Ayres guest-starring as the Governor.)

MacArthur's Danny is more emotional and impulsive, with understandably human concerns McGarrett has to reign in to keep him focused on the job at hand. Chin Ho and Kono not only add local color - their very naturalistic performances are eminently likable and engaging, and help give the show a humanism that fit well with McGarrett's hard-edged chief. The show was a boon for Asian and Hawaiian actors, and Kam Fong and Zulu in particular did much to eradiate the racial stereotyping of earlier films and TV shows, just as the show painted a more realistic portrait of the popular vacation destination. Among the Asian actors in guest spots this first year: Nancy Kwan, Philip Ahn, James Shigeta, and Soon-Tek Oh.

The creation of Leonard Freeman, Hawaii Five-O doesn't play down to its audience like most '60s and '70s cop shows; though not exactly intellectual, Hawaii Five-O was a show for grown-ups. It was surely one of the most violent shows of its day. Characters bleed when shot: the pilot has McGarrett shoot an attacker three times at point blank range, and an early episode ("Strangers in Our Own Land") opens with a still-shocking car bomb explosion. The show also impressively deals with the love-hate relationship native Hawaiians have with white American developers: that the bustling tourist trade comes at a heavy price, namely the raping of the land and a certain loss of identity for its indigenous people.

Indeed, while Hawaii Five-O's scripts dealt with the usual crimes associated with cop shows, most episodes do so within the particular context of Hawaii's unique status geographically, of its international and culturally diverse makeup. 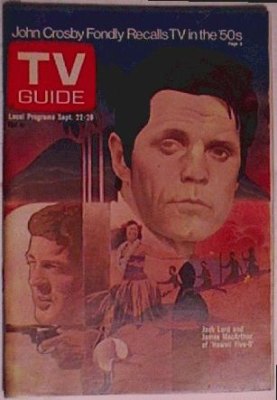 Hawaii Five-O: The First Season looks outstanding. The full frame image is essentially flawless, with no negative dirt, damage, etc. and is impressively sharp with excellent color. The shows are not time-compressed or edited. Most run about 51 minutes and include the "giant wave" bumpers noting the commercial breaks. Based on their classic TV releases of late (Perry Mason, The Lucy-Desi Comedy Hour, Mission: Impossible), no label is doing a finer job in this department than CBS / Paramount.

Note: Though the pilot episode, "Cocoon," was recut into a two-parter for syndication, the DVD happily offers the original, TV-movie version of this first look at Five-O.

Audio wise, the Dolby Digital mono is impressively clean considering how much of the audio was recorded in real buildings, beaches, streets and the like. A Dolby Digital Spanish track is also available, as well as (yellow) English, Spanish, and (Brazilian) Portuguese subtitles. (Menu screens in all three languages are accessible.) This reviewer's one complaint is that, unlike the CBS/Paramount DVD of Mission: Impossible, they just couldn't resist sticking that great title tune over the menu screens. By including it they're only diluting its impact in the actual shows.

The lone supplement is a real surprise, Emme's Island Moments: Memories of "Hawaii Five-O", an apparently expanded "special edition" version of a 1996 program originally produced for Hawaiian television. Hosted by Emme Tomombong, the show belies it local origins, holding up extraordinarily well and features an impressive array of behind-the-scenes footage, then-and-now location material, and interviews with surviving cast and crew members, as well as local columnists and government types who talk about the show's local impact. It's a treasure trove of good information, and fans of the shows will be pleased.

Though the series went on autopilot in its later years, this first season of Hawaii Five-O is most impressive, and CBS / Paramount's DVD offers an outstanding presentation. Highly recommended.