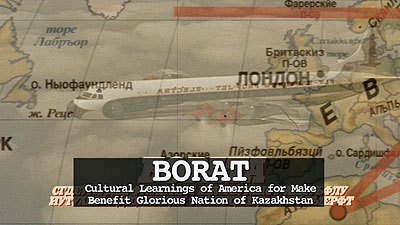 
The Movie
Think of the last time a TV show made the leap from the small screen to the movie theater, without the results being essentially crap. Unless the show was used only as inspiration, like the meta-parody Brady Bunch films, quality adaptations are few and far between. The only one I can think of recently is "Jackass," which is really just an oversized, unrestricted version of the show.

So it makes sense that Borat would buck the trend, moving from "Da Ali G Show" to the theaters with remarkable grace, since it shares a lot in common with "Jackass." Hidden camera (usually in plain sight) catch how people react to unusual situations, with some bizarre stunts thrown in. But with Borat, the reactions people have often reveal inner truths about them, normally ones that civilized society has tried to surpress. It's incredible that in this media-savvy day and age that people haven't learned to control themselves around a camera, but that just goes to show how deep negative values like racism, homophobia and xenophobia run. These people simply can't help themselves.

Of course, Borat isn't a sociological experiment. It's a comedy, and a hilarious one, that lets us laugh at human behavior and hthe less enlightened among us. Sascha Baron Cohen, the creative force behind "Da Ali G Show" has managed to craft a pretty solid story behind all the goofy sketches, making more of a cohesive film than Jackass could ever achieve. Borat (Cohen), a television reporter from Kazakhstan, has been sent to New York by his country, with his rotund producer Azamat (Ken Davitian) in tow, to learn about the U.S. and bring that knowledge back to the impoverished former Russian nation. Borat gets sidetracked though, when he discovers C.J. Parker, the buxom star of "Baywatch," and sets out to marry her, taking him and Azamat across America. Along the way, he stops to experience the local culture, including a rodeo, frat boys, southern etiquette and evangelical religion, all in his guise as a naive, offensive foreigner. 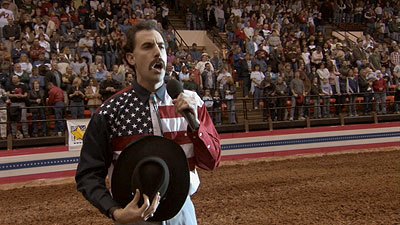 Cohen's devotion to his character is what really makes the film work, as he developed Borat into a real, though cartoonish person. Every reaction, every line, makes sense for the character and works in the framework of the story, while he gives Borat a physicality that, though exaggerated, is grounded in the film's reality. You can tell that he's succeeded in making Borat a true character, because even when he's being uncouth, unlikable and simply ridiculous, you still are on his side and believe he knows no better. And in those rare moments of emotion the film offers us, you can actually feel for him. Borat is our hero, no matter what he does, including his time at a Pentecostal service that's at turns insane and sweet, and surprisingly respectful of the faithful in attendance. It shows more self-control than I could when faced with people jumping around like kindergardeners jacked up on Pixie Sticks.

While Cohen earns more than his fair share of laughs, especially during the infamous fight scene with his producer (an amazing segment that is unlike anything you've seen before and features the best use of visual censoring ever), it's the real people in the film who are fascinating. Watching the frat boys who pick up a hitchhiking Borat express their wishes that slavery was legal, or the rodeo crew talking about hanging gay people is an education in how far America still has to go toward any semblance of tolerance. Sure, Cohen's characters are openly bigoted, and especially anti-Semitic, but the people in the film make no attempt to correct him or argue with him, and instead embrace his ideas. It's shocking when you see the crowd at the rodeo cheer Borat's wish that "George Bush drink the blood" of the Iraqi people. It will come to no one's surprise that the film travels across the country through the southern states, but it's still pretty scary to think people are this open about their ignorance.

My only complaint, a minor one at that, is the way the main plot wraps up. In an effort to not ruin it for those who haven't seen the film, Borat's quest comes to an end in a way that's not exactly satisfying, leaving everything hanging in a way. The core audience for this film isn't looking for plot resolution, but considering how the film is built around this element, it would have been nice to bring it to a more interesting and complete finish. As it is, it just feels like another bit on the highly-entertaining string of fun sketches. 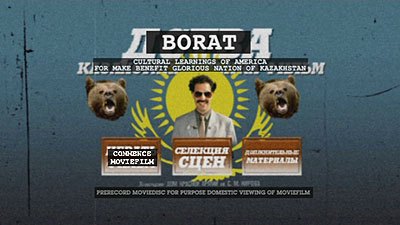 The DVD
A one-disc release, this DVD is packed in a standard keepcase with a slipcover that, for once, doesn't repeat the interior art, and hides a great visual joke. The disc, which carries over the cover art joke not just on the disc art, but on the menus as well, has an anamorphic widescreen main menu with options to watch the film, select scenes and check out the special features, where you can adjust languages. Language options include English Dolby Digital 5.1, Spanish, Russian and French Dolby Digital 2.0, and Hebrew (make sure to check out the Hebrew track), with English and Spanish subtitles and closed captioning.

The Quality
There's a variety of camera types used in this film, and some artificial dirt and damage has been added in places, but overall, the anamorphic widescreen transfer looks terrific for a documentary shot run and gun. It's obvious which scenes have received some camera set-up, as they look pristine, while the rest simply look very good. Colors areappropriate , if a little dull, and the image is crisp where it's meant to be. There's no unintentional dirt or damage, and the film is free of any obvious digital artifacts.

The audio is presented in a 5.1 Dolby Digital mix, but the surrounds only really come into play with the film's music. The documentary footage is mainly center-focused when it comes to sound, delivering a clean, distortion-free track that gets the heavily-accented dialogue across cleanly.

The Extras
The paucity of extras on this big-time release reeks of a future double-dip, but, then, I said that about Ocean's Twelve a long while back. Sadly, there's no commentary track here, which could have been fantastic. There's so many situations in this film begging for some background info, but we get nothing. So instead, we start off with a collection of deleted scenes, titled "Censored Footages." There are eight scenes, four of which were cut from the film, while the other four are different pieces of footage that didn't make it into the movie. Each and every one if worth watching, especially the scenes where Borat is pulled over by cops in various cities and the montage of bits that didn't have enough to carry a whole scene (like his visit to a Civil War recreation.) Unfortunately there's no play-all option for the 24 minutes of comedy.

The other section, "Propaganda," features the Global Propaganda Tour, a nearly 17-minute collection of appearances made to promote the film. Included amongst the film festival footage are his stop at the Conan O'Brien show, his sexy time with Jay Leno and Martha Stewart, and his opening scene on "Saturday Night Live." If you like Borat, it's a fun group of clips. Also in this section is a Kazakh commercial for the film's soundtrack and some trailers for other films. 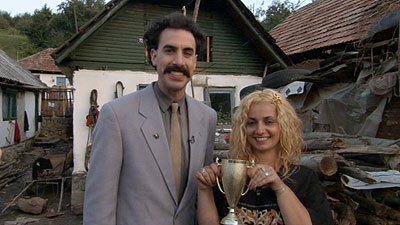 The Bottom Line
For fans of Cohen's sociological explorations of America, as seen on HBO, Borat delivers an extra-large chunk of silliness. For his detractors and all those who tried to sue him, it's another reason to get pissed off. Either way, there's no denying Cohen is a genius when it comes to creating audacious alter-egos. The DVD looks and sounds very good, but is a bit of a disappointment in terms of the extras. That shouldn't stop you from checking it out, but it may make you hold off on a purchase.