Universal // Unrated // April 24, 2007
List Price: $26.98 [Buy now and save at Amazon]
Review by Stuart Galbraith IV | posted May 10, 2007 | E-mail the Author
Fans of the original Columbo series will be pleasantly surprised by Columbo Mystery Movie Collection - 1989, five TV movies that originally aired on ABC during the spring and fall seasons of 1988-89 and 1989-90, as part of a failed attempt to revive the rotating-wheel mystery formula that had served NBC so well back in the 1970s. New shows like Gideon Oliver and B.L. Stryker failed to catch on, but the resurrected Columbo and Kojak shows did quite well, and Peter Falk eventually starred in 24 new Columbos through early 2003. The good news is that the new series is as delightful as the original run of shows were. The weakest of the five movies is quite entertaining despite some problems while the best one, "Sex and the Married Detective," is up to the level of the finest '70s Columbos. Though somewhat repetitive, with scripts at times reworking characters and situations done before, and despite a dearth of big-name guest stars, Falk's endearing characterization holds it all together. If you liked the original Columbo, you won't be disappointed with this set. 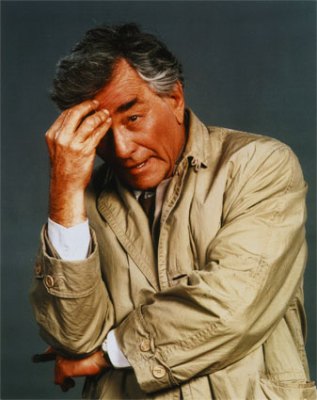 Universal and NBC killed their golden geese when they effectively cancelled Columbo and The Rockford Files in quick succession. In each case the studio and/or network decided the shows were more trouble than they were worth. Rockford star James Garner's battles with Universal are legendary; Falk and Columbo's producers' relationship with Universal was never as contentious, but apparently the series frequently ran over budget and over schedule in an effort to maintain its high quality.

In any case Columbo's revival after a more than decade-long absence thankfully sticks to the series' established formula. Not really "Mystery Movies" but rather inverted detective stories (or "howcatchems"), the murderer in each film is plainly revealed in a first act set-up. Viewers see motives established, (usually) the planning of the murder, the crime being committed, and the murderer's clever and sometimes elaborate means establishing an alibi. (On Columbo the latter often incorporates cutting-edge technology.)

Homicide Detective Lt. Columbo (Falk) arrives on the scene, and the reminder (and most enjoyable aspect) of the films find him methodically chipping away at the murderer's manufactured alibi, finding bits of evidence tying him to the crime, etc.

The joy of Columbo is Falk's characterization: where the murder suspects are frequently short-tempered and arrogant, Columbo is unfailingly polite and self-effacing, where they are usually rich and snobbish, Columbo is lower-middle class and low-brow. To some degree this is an act on his part; he'll play the part of the fool so that his suspects will become overly-confident and slip up, a game of cat-and-mouse where the roles are actually reversed. Conversely, it's also clear that Columbo is genuinely fascinated by the alien worlds his investigations take him, in this case such places as a fraternal organization of magicians, a government-sponsored ESP laboratory, a Hollywood film studio, a sex therapy clinic, etc.

Somewhat patterned after Crime and Punishment's Porfiry Petrovich, Columbo apologetically badgers his suspects with exquisitely-timed interruptions. "Just one more thing," Columbo will say upon suddenly re-entering a room, zinging the murderer with a choice revelation that puts him one step closer to the slammer, and thus psychologically throwing him completely off-guard. The five TV movies - "Columbo Goes to the Guillotine," "Murder, Smoke and Shadows," "Sex and the Married Detective," "Grand Deceptions," and "Murder, A Self-Portrait" - retain the original series' format while slightly upgrading the production values. (The '70s Columbos, like all of Universal's TV shows from the period, had a sausage factory, utilitarian look about them; these newer episodes are a bit more handsome.) Columbo is still driving his dilapidated 1959 Peugeot 403 convertible and dotes on his slobbery Bassett Hound (sporting a suspiciously lighter coat than the canine seen in the original series). "Murder, A Self-Portrait" even finds Columbo and "Dog" at a Bassett Hound show and later in the episode, when the artist-murderer insists on painting Columbo's portrait (hoping to throw him off the scent), there's a cute bit where Columbo shows up for his first sitting, dog in tow. When the artist tells him he can leave the dog outside, Columbo sadly tells the animal, "Well, we tried."

The big difference between these 1989 movies and the original series is the absence of big-name stars as the murderer and in supporting parts. Instead of actors like John Cassevetes, Ricardo Montalban, and Nicol Williamson, murderers this outing include Anthony Andrews, Fisher Stevens, Lindsay Crouse, Robert Foxworth, and Patrick Bauchau - talented thespians all, but hardly household names. Their general lack of familiarity isn't all bad as in some ways they're more believable than the established names and faces of earlier Columbos, but it's still a bit of a disappointment, especially since some of the best earlier shows had pitted Columbo against larger-than-life personalities (Montalban, William Shatner, Laurence Harvey, Jack Cassidy, etc.) Later seasons, however, would bring back series veterans like Robert Culp, Patrick McGoohan, George Hamilton, and Shatner, while upping the caliber of first-timers with people like Faye Dunaway, Rip Torn, and others.

A few familiar faces do pop up in these shows, including Jerome Guardino (returning as Sgt. Burke)*, and ubiquitous '60s character actor Vito Scotti, who had appeared in five '70s Columbos, has a substantial supporting part in "Murder, A Self-Portrait." (Falk seems to have really liked working with Scotti. In one of the '70s Columbos, Falk can barely keep a straight face watching Scotti's broad characterization.)

James Frawley, Leo Penn, and Sam Wanamaker, all of whom helmed original Columbos, between them directed the five shows, each of which have little visual flourishes that are new to the series, bits of visual fantasy most overt in "Murder, A Self Portrait," which incorporates Columbo as a participant in several effectively done dream sequences.

"Columbo Goes to the Guillotine," "Grand Deceptions," and "Murder, A Self-Portrait" are about par by Columbo standards, with the last the best of the three. "Grand Deceptions" is by far the weakest. Its setting is too similar to one of the best original shows, "By Dawn's Early Light" and Robert Foxworth's killer proves all too easy to catch. "Murder, Smoke and Shadows" is a real curiosity: it's essentially set on the Universal Studios lot (with lots of great footage of the theme park circa 1989) and its murderer is a whiz-kid of a director specializing in high-concept special effects films - in other words, a thinly-disguised Steven Spielberg (who had himself directed one of the earliest Columbos, "Murder by the Book"). That Universal would bite the hand that feeds it, so to speak, is intriguing, but the episode is not one of Columbo's best.

"Sex and the Married Detective," however, is a real delight, a strong noirish episode boasting an excellent performance by Lindsay Crouse. This show likewise exemplifies another facet of some of the best Columbos. He's a man who loves his job and genuinely enjoys meeting people from the myriad walks of life that his investigations take him - even, sometimes, the very murderers he's charged with catching. (Probably the best examples of this can be found in "Swan Song," with Johnny Cash; "Forgotten Lady," with Janet Leigh; and "Try and Catch Me," with Ruth Gordon.)

The full frame transfers of these 1989 Columbos are for the most part excellent, showing little sign of age-related wear and no damage. The stereo audio (still in its infancy on network television back them) is likewise surprisingly strong. Optional English subtitles are included.

The input of original series hands like Falk, William Link, and Richard Alan Simmons ensured that a revived Columbo wouldn't veer far from its time-tested format, and the irreplaceable Peter Falk slips so easily back into the character you'd think he'd taken the weekend off instead of 11 years. This reviewer can't wait for the Mystery Movie Collection - 1990 Highly Recommended.

* Guardino is the spitting image of an older Steven Hill, who has a small role in the same episode, "Murder, Smoke and Shadows."