Paramount // Unrated // May 22, 2007
List Price: $14.99 [Buy now and save at Amazon]
Review by Paul Mavis | posted May 12, 2007 | E-mail the Author
I haven't spent any significant time with Alvin and The Chipmunks in say...thirty years or so (I had one of their little bright red wax records that I used to listen to on my Close-N-Play), so I wasn't sure what to expect from this collection called Alvin and The Chipmunks Go To the Movies. Gathering up three 1990 episodes from their 1983 - 1991 run on NBC's Saturday morning lineup, Alvin and The Chipmunks Go To the Movies features Star Wreck (a parody of Star Trek), Batmunk (a Batman spoof), and Funny...We Shrunk the Adults (you guessed it). I remember repeats of CBS's 1961 The Alvin Show; I recall it being a fairly funny show, as were some of the original Chipmunk musical recordings. But I saw precious little evidence of that tradition carried over here. 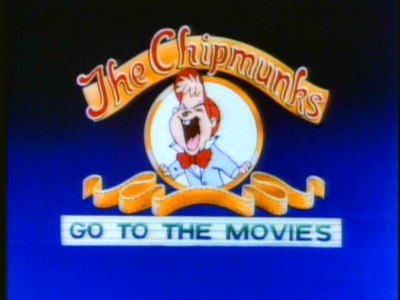 My understanding is that Ross Bagdasarian, the original creator of The Chipmunks, was involved in some way with this reincarnation, although that's only a guess, because these three episodes are missing their end credits (only the show's opening title sequence is present). Bagdasarian, who in addition to supplying the voices (mechanically altered, of course) of The Chipmunks, also performed as his alter ego, David Seville, the adopted father of the three Chipmunks and the straightman for little stinker Alvin's frequently smart-assed jokes. That dynamic worked spectacularly well for Bagdasarian (he sold millions and millions of records over the decades), but it's nowhere to be found here in this updated version.

Dave Seville does show up in two of these episodes, and he does yell at the boys, but these little moments only act as framing devices for the true focus of these particular shows: sticking The Chipmunks into famous movie parodies. And while the parodies stay fairly close to the originals, with some reasonably detailed backgrounds for this kind of cheap animation (the Star Wreck episode looks particularly good), the writing is depressingly flat, with little or no jokes to remind us of past Chipmunk glory. Particularly sad is the M.I.A. Alvin, that annoying little bastard people still laugh at when he snottily demands a hula hoop in his Christmas song. Clearly the main attraction of the group, Alvin's the bright, wise-ass kid from Hell that every parent dreads, but shoe-horned into these restrictive parodies, he becomes just another straightman. Worse, in the Batmunk parody, Alvin is cast as the villain Jokester, playing it mean, not funny, which can seriously confuse kids (as it did with my little daughter).

It doesn't help either that these episodes look pretty bad, with major dirt and picture anomalies, along with color shifting and a soft focus. Obviously, not a lot of care was put into this collection; with the end credits missing, these little shorts are over after about twenty minutes. Featuring only three shows on the whole disc, that's just over an hour of Alvin and The Chipmunks Go To the Movies - not exactly a compelling reason to shell out fifteen bucks and change for something your kid probably won't like anyway. 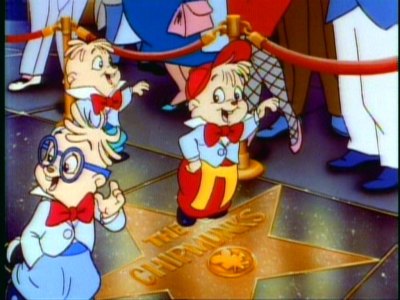 The Video:
As I detailed above, the picture is only fair at best for Alvin and The Chipmunks Go To the Movies. I wonder if it looked better on TV?

The Audio:
The Dolby Digital English 2.0 stereo mix for Alvin and The Chipmunks Go To the Movies is fairly lively (I must admit I did enjoy that insanely screeching theme song). Close-captioning is available.

The Extras:
There are no extras for Alvin and The Chipmunks Go To the Movies.