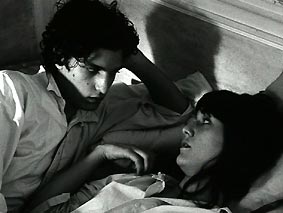 Philippe Garrel's tribute to the Parisian riots of '68 titled simply Les Amants Reguliers a.k.a Regular Lovers (2005) is a rough looking, shot in black and white, picture replicating a style and feel rather close to that favored by the French Nouvelle Vague directors some fifty years ago.

Francois Dervieux (Louis Garrel) and his friends decide to take on the streets of Paris hoping to instigate the Revolution. Students, anarchists, and reactionaries set up barricades and begin launching Molotov cocktails against the government forces.

When the police attacks a small fraction of rioters who have been hiding behind the barricades Francois runs away. Later on he finds shelter on the rooftop of a dilapidated building. On the following night Francois is back on the streets.

During a quiet party Francois meets the beautiful Lilie (Clotilde Hesme), an art student, and the two become emotionally involved. The havoc on the streets brings the couple even closer. Soon, Francois realizes that Lilie has become more important than the Revolution.

Unexpectedly, Lilie decides to accept the generous offer of a fellow artist and move to New York City. 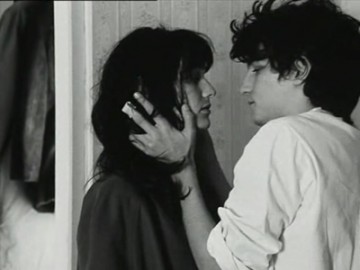 Gritty, stripped of excessive dialog, and intentionally slow-paced Regular Lovers is a film many believe to be revealing of Garrel's personal involvement in the Parisian riots. From the meticulous camera work following the action at the barricades, to the drugs, sex, and finally disillusionment amongst the students the picture recreates the spirit of a time charged with revolutionary enthusiasm and uncertainty.

Placed next to Bertolucci's similarly-themed The Dreamers (2003) Garrel's picture looks impressively mature, rugged, and devoid of glimmer. The main protagonists appear truly affected by the social upheaval in the French capital and their actions are often unpredictable. Self-destruction, as depicted by Garrel, is inevitable!

It is the sense of authenticity however which the director achieves that separates Regular Lovers from Bertolucci's glitzy pic. Cinematographer William Lubtchansky has marvelously complimented the director's vision providing a near documentary look to the film (for long periods of time the camera remains static studying the faces of the rioters, their fears, and eventually their collapse).

Finally the sense of nostalgia that permeates through Regular Lovers is hardly comparable to anything I have witnessed in recent cinema. A mix of dated idealism and abstract modernity transform Garrel's film into a memorable cinematic experience those who like their films free of artificial flavors will immediately embrace.

In 2005 the picture won the coveted Silver Lion Award at the Venice Film Festival (Best Director-Philippe Garrel) as well as the Golden Osella Award for Outstanding Technical Achievement (William Lubtchansky). In 2006 the picture won the FIPRESCI Prize for Best Director and consequently a Cesar Award for Most Promising Actor Award (Meilleur jeune espoir masculine, Louis Garrel). 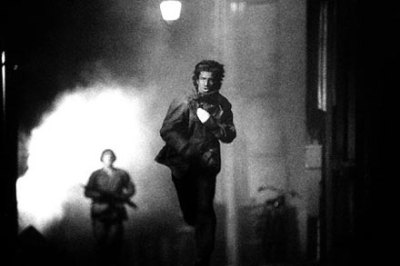 Presented in its original aspect ratio of 1.33:1 the print provided by Zetigeist Films appears identical to that used by Artificial Eye in the UK. It is solid - excellent black and white gradation, good contrast and detail (with intentional grain and blurs), lack of any disturbing damage (specks, dirt, etc). Unfortunately this is an interlaced transfer which some of you with more sensitive home set-ups will find disappointing.

Some, however, will hardly notice the improper conversion! Aside from a few revealing of the transfer scenes, due to the manner in which Regular Lovers was shot, the rest of the print is actually manageable. Truth be told however if your eye is trained to recognize faulty transfers where "combing" and "ghosting" are often found you might want to seek the UK disc. This being said I have no other reservations about the presentation.

Presented with a French DD track and very well done optional English subtitles the audio presentation is flawless. Dialog is very easy to follow and I did not detect any disturbing issues (there are no pop ups, hissing, etc). Indeed, this is as close to the theatrical presentation treatment as you could imagine. Excellent!

First of all the disc arrives in a stylish clear-case complimented by a nicely designed booklet with an essay by film critics Kent Jones. This is an insightful piece with important highlights providing the reader with valuable cross-reference points pertaining to Garrel, his film, and the influence of the French Nouvelle Vague. Next, we have the Venice Film Festival Press Conference with director Philippe Garrel, stars Louis Garrel and Clotiide Hesme and producer Gilles Sandoz which is dubbed in English (original audio varies - Italian with French). A great source of additional info the press-conference is practically a mandatory watch as Garrel answers a number of questions pertaining to the manner in which the film was shot and edited as well as the inevitable comparison(s) with Bertolucci's The Dreamers. Next, there is the original theatrical trailer and a short section highlighting Garrel's work.

Running the gamut of pre- and post- revolutionary action Regular Lovers is a film of exceptional quality. It is raw, intoxicating, and brilliantly-executed! Yet, the flawed transfer prevents me from granting it the otherwise deserved Collectors Series mark!!