General of the Dead Army (Italian Release), The 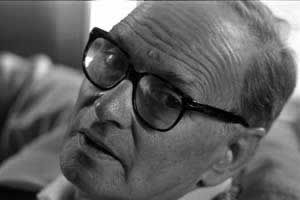 Twenty years after WW2 an Italian general (Marcello Mastroianni, La Dolce Vita) embarks on a questionable mission through the heart of Albania searching for the remains of those who once fought on the side of the Fascists. Relying on dated and often ambiguous records the generale encounters an ambitious German colonel (Gerard Klein) who appears on a similar quest.

Based on Albanian author Ismail Kadare's hugely-popular novel The General of the Dead Army Luciano Tovoli's Il Generale dell'armata Morta (1983) is a film full of symbolism. Slow, often resembling a theater play, Tovoli's work evokes parallels with Valerio Zurlini's adaptation of Buzzati's Il Deserto dei Tartari a.k.a The Desert of the Tartars (Tovoli was the cinematographer).

Searching in vain for the bodies of the Italian soldiers the generale's will to endure the unfriendly locals is repeatedly tested. Frustration is replaced by anger which drastically transforms Mastroianni's character.

Logically, the mission comes to a dead end.

Pic's blending of comedy with satire is consistent and eventually smoothens up some of the shaky parts the script reveals. Still, those unfamiliar with Kadare's work will likely have a difficult time grasping the extent of the criticism Generale dell'armata Morta is saturated with.

The technical presentation is practically flawless even though the pickier among viewers will quickly recognize a typical for Italian cinema at the time feature - dubbing. An all-star cast of French and Italian actors (notable performances by Anouk Aimee, Michel Piccoli, and Sergio Castellitto) recite their lines in native tongue which the producers have altered. A few sync-issues are noticeable.

Finally, Generale dell'armata Morta does not rank amongst Tovoli's best works (this is his only attempt at directing, cinematography remained his forte) but the finesse which Mastroianni brings to his character does. His ability to switch moods instantaneously is probably more of a reason to see the film than the elusive criticism on war Kadare's novel inspired.

Presented in its original aspect ratio of 2.35:1 and enhanced for widescreen TV's the print provided by RHV-Italia is of very good quality. Colors appear healthy with a natural look while contrast is handled exceptionally well. Grain is noticeable throughout the print but it is intentional enhancing the feeling of desperation. Edge-enhancement is present but tolerable, it is not intrusive. My only criticism here pertains to the presence of a few annoying scratches and marks which give away the film's age. From what I gather these are permanent, part of the print, and RHV were not able to address them. Overall, those looking to obtain a copy of this film will not be disappointed though they won't be utterly impressed either. PAL-encoded. Region-0.

Presented with its original Italian mono track the film sounds very well. Dialog is crystal clear and easy to follow though as already mentioned in the review you should be able to notice when French is spoken and consequently dubbed in Italian (this is how the director intended it). Optional English subtitles are provided and they very well done without any notable mistakes.

Unfortunately none of the extras on this disc contain English subs - theatrical trailer and interviews with Luciano Tovoli & Enzo Porcelli.

As far as I know this little known in America film has never been released before in an English-friendly form. It's subtle criticism on war and those who serve it is interesting if ultimately a bit static. As usual Mastroianni and Piccoli are a pleasure to behold. If pacing isn't an issue and you're willing to read between the lines give it a try!