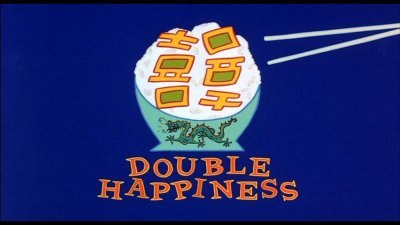 Double Happiness is a movie about a young woman and her life in a traditional Chinese family. The movie was produced in 1994 by Canadian-Chinese director Mina Shum. The film was debuted in the Toronto Film Festival and won a couple awards, and a few others from other film festivals. It was a pretty successful production. Headlining the cast is Sandra Oh (Grey's Anatomy), whose performance is simply sensational. Double Happiness offers an invigorating story that pulls you in and doesn't let go.

Jade Li (Sandra Oh) is a twenty-something aspiring actress who dreams of winning an Academy Award. She also lives at home and comes from a very traditional and conservative Chinese family. Her father (Stephen Chang) is as strict as they get. For instance, Jade's brother Winston was disowned for failing to live up to the high Li family values. Her mother (Alannah Ong) is a caring woman who doesn't always agree with the strict rules set by her husband, but understands they are important. Pearl (Frances You) is Jade's younger sister who is trying to make sense of it all.

The Li family immigrated to Canada from Hong Kong in hopes to offer their child better opportunities. Like many other traditional Chinese families, the parents impose strict and high expectations in regards to academic, professional, and personal achievements. For Jade and other first generation young adults, the expectations can be too much. Jade is forced to live a double life, for her parents and herself. She fears losing her family as her older brother Winston was disowned.

Double Happiness follows Jade's life as she comes to a crossroad and decides whose life is more important. In this story, some of the key events include Jade dating a Caucasian university student Mark (Callum Keith Rennie), being setup on dates with "respectable" Chinese men, and her family putting on a facade for the visit of her dad's childhood friend Bing (Greg Chen). These situations and a couple others unfold and outline the hardship Jade faces trying to satisfy her own ambition and the strict expectations of her family. 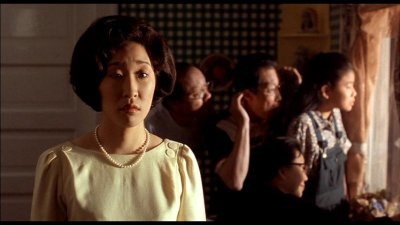 What works for Double Happiness is Sandra Oh. She does a wonderful job in her role and gives a topnotch performance, providing an emotionally troubled, conflicted character. Furthermore, her chemistry with the other actors and actresses works well. It is no surprise that Oh won an award for her performance (Genie Award for Best Performance by an Actress in a Leading Role, awarded by the Academy of Canadian Cinema and Television).

The story itself is also compelling. The Li family values and high expectations set by her parents (primarily her father) are not uncommon for recently immigrated families. The high expectations are demanding and this story addresses the reality of these situations well. Kids who come from immigrated families and are "Americanized" seek to live out their lives without regard or restriction based upon what or who their families deem respectable. Another key point is the intelligent and witty dialogue, which helps keep the film engaging.

However, while I thoroughly enjoyed Double Happiness, I took issue with something that is probably very minor and perhaps insignificant. Sandra Oh plays a Chinese character and if you are familiar with her background, then you know she is Korean. Oh has very distinct Korean physical characteristics (in my opinion) and I couldn't stop thinking about how much she does not look like she's Chinese. In this respect, I thought she looked out of place. Still, the film was very strong and as I said, it is a minor gripe. Most people probably won't even notice. The fact remains that Oh gave a topnotch performance.

Overall, Double Happiness is a fantastic drama that portrays the life of a twenty-something year old Chinese woman who is trying to come to terms about how to life her life. The story details a realistic issue that many first generation individuals have deal with who come from recently immigrated families. The movie is one that should not be missed. However, while it is strong, it has limited replay value. It is good, but I cannot imagine wanting to watch is over and over again. 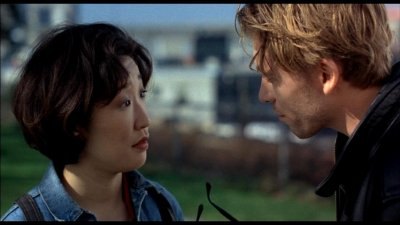 
Video:
The video is given in its original theatrical presentation of 1.85:1 ratio widescreen color format. The picture quality is pretty good, but not great. There is a distinct grain in the video and it is noticeable throughout the feature. However, considering it was produced in 1994, it still looks quite good.

Audio:
The audio is given in Dolby digital 2.0 stereo sound. The language track is a mix of English and Cantonese; there are forced English subtitles for Cantonese language portions. The sound quality is pretty good and suits the needs of the presentation. It is dialogue driven and the characters are audible.

Extras:
There are no extras included with this release.

Final Thoughts:
Double Happiness is a drama about a twenty-something year old Chinese woman who is coming to terms with her double life. Her family expectations dictate that she lives a certain way; she tries to appease them while fulfilling her own dreams. As the story unfolds, Jade Li (Sandra Oh) realizes what is more important when her two lives come to a clashing halt and she is forced to pick one. The movie is very strong and actress Sandra Oh gives a compelling and sensational performance as the lead. The story also captures an authentic issue that many individuals from immigrated families have to deal with. The combination of the characters and storyline produce an exhilarating story that is easy to get into. However, while a good film, Double Happiness has limited replay value.