Other (International) // Unrated // April 30, 2007 // Region 0
List Price: $39.99 [Buy now and save at Cd-wow]
Review by Stuart Galbraith IV | posted June 6, 2007 | E-mail the Author
An almost indescribably compelling documentary about four door-to-door bible peddlers, Albert and David Maysles' Salesman (1968) is truly a landmark American film, apparently one of the first to present its subjects - ordinary working men - without narration, commentary, or other analysis beyond the inherently subjective nature of the filmmakers' editing choices. Utterly mesmerizing, the workaday existence of these Eugene O'Neill types cajoling lower- and lower-middle class housewives and their husbands to commit to purchasing their wares is deceptively straightforward. The film isn't what you think it's going to be, and its value as a document of a bygone profession has only increased with time. 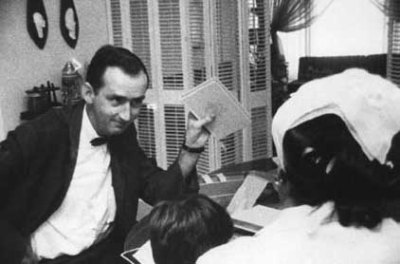 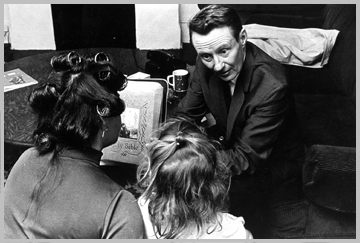 Paul "The Badger" Brennan, Raymond "The Bull" Martos, Charles "The Gipper" McDevitt, and James "The Rabbit" Baker are Boston-based men with deeply-etched faces straight of an early '50s noir: imagine Scott Brady, Neville Brand, Sterling Hayden, and Elisha Cook, Jr. They move from territory to territory living out of cheap cinderblock motels, chain-smoking Marlboro Reds, role-playing and fine-tuning their pitches late into the night or early the next morning before setting out solo or in pairs. Chiefly they're selling a super-deluxe Catholic Bible, heavily illustrated and luxuriously bound for the princely sum of $49.95. Given that a paperback in the late-1960s sold for something like 35 cents, in today's money these bibles would easily run into hundreds of dollars.

The film opens in a working class Boston neighborhood in the middle of winter, where things are tough. After a sales meeting/pep rally where overly optimistic colleagues make outrageous predictions of earning $50,000 that year, the foursome try their luck in sunny Florida. But sales are equally grim and virtually non-existent. On a good day one might sell two or three bibles, but the next might just as easily strike out completely. Gradually, one man begins to crack under the pressure and before the film's over the audience realizes that these guys are working jobs that are the psychological equivalent of coal miners.

It's this growing respect for the men and their horribly difficult jobs that comes as the film's biggest surprise. Though they use many of the same sales techniques as, say, used car salesman, theirs is a much softer sell, probably because they're invited into people's homes to make their pitch, part of sales campaigns sanctioned by local Catholic churches. They get pissed off when people jerk them around, but basically the men treat their customers with respect, and to some degree even enjoy meeting the people they're trying to sell to.

In any case as one begins to understand the cat-and-mouse nature of their pitches (and each man's individual style), one also realizes that the filmmakers are never condescending or disapprove of their profession. They're not like today's crooks who prey on the fears of senior citizens with unnecessary roofing jobs. These four are honorable working men, unfortunately saddled with too much humanity and territories whose customers are as working class as they are, living on household budgets stretched too thin to even afford even the Mid-American Bible Co.'s 's dollar-a-week plan.

Indeed, it's hard not to eventually root for them in what by the end of the film becomes a genuine nail-biting, do-or-die sales pitch. Two of the guys work on a family on the cusp of buying one of these high-priced bibles, but then they beg off when one of the salesmen, on the downslide, blows it by revealing just a hint of desperation. It's an agonizing scene.

Filmed in 16mm (not 35mm, as the IMDb wrongly asserts), Salesman is presented in its original full frame format in an excellent black and white transfer with virtually no damage or wear. The DVD offers English subtitles, a very useful option as some of the dialogue is occasionally hard to make out. Though produced by Britain's Master of Cinema label, the DVD is NTSC and all-region.

The strong extras include a great 35-page booklet that reproduces the film's original production notes, full of information on the film's conception, production, editing and releases phases. Albert Maysles on "Salesman" is a 34 minute interview, also full of observation (including a lot of good technical stuff) though filmed in a shaky-camera style this reviewer found distracting. (Did we really need that lingering close-up of Maysles' right shoulder?) A Kenny Turner & Albert Maysles Q&A reunites Maysles with Turner for a 2005 Chicago Documentary Film Festival, Turner appearing in the documentary as the bible company's district manager. (Maysles reveals that Paul "The Badger" Brennan and Charles "The Gipper" McDevitt have since passed on, but that Raymond "The Bull" Martos and James "The Rabbit" Baker are still living.) Lastly, an excellent trailer does a great job selling the film.

Salesman is a seemingly minor, isolated tragedy with a far-reaching, universal theme about the American working man. A great film and a must-see, Eureka!'s Masters of Cinema DVD does the film justice. A DVD Talk Collector Series Title.