Pinky and the Brain, Vol. 3 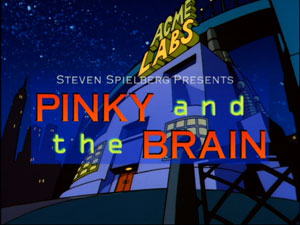 
The Story So Far...
After getting their start as members of the cast of "Animaniacs," Pinky and the Brain, a pair of genetically-altered lab mice, moved on to their own half-hour series. Not much changed, as Brain continued to plot to take over the world, and Pinky continued to mess things up, say nonsensical words and ask bizarre questions. From their cage at Acme Labs, the Brain plans and schemes, putting him and his sweetly retarded pal into a wide variety of situations and time periods, which are told in one or two stories per episode. The first two volumes of the series were released in 2006. DVDTalk has reviews for both sets: Volume 1 | Volume 2

The Show
It's impressive that the show's creators managed to wring 65 episodes of "Pinky and the Brain" (on top of all the "Animaniac" adventures) out of such a simple concept. After all, every episode was built on essentially the same premise: The Brain tries a new plot to take over the world, Pinky does something to screw it up, and they begin planning again. Whether the setting is Japan, the 1950s or Shakespearian England, the story remains the same at its core. It's all a matter of how they get to the finish line that matters.

While the visual of these cartoony mice, the slapstick violence inflicted by and on the Brain, and Pinky's utter silliness are certain to be entertaining to kids watching, the majority of the show appeals mainly to older viewer who get the references to any number of subjects that require either a college degree, a good deal of life experience or wikipedia access to understand. Episodes like "Broadway Brain," set in the world of musical theater, or "You'll Never Eat Food Pellets in This Town Again," an inside-joke laden story about TV production, are a bit too complex and niche-focused for a child to really enjoy. 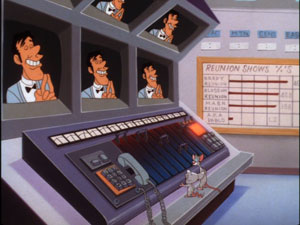 The traditional adventures make up the bulk of the shows, like "Bah, Wilderness," which sees Brain try to use the children of the world's leaders to spy on them, or "Beach Blanket Brain," the story of Brain's attempt to take over the world with a hypnotic sunscreen lotion. But there are plenty of non-traditional episodes in this collection, like "Brainy the Poo," a very-different episode that puts Brain in the world of children's literature, and "Pinky's Turn," an opportunity for Pinky to try and take over the world. It seems like these out-of-the-ordinary episodes really set the creators free, as they are among the best in the set, like "The Pinky POV," a story told from Pinky's perspective, or "The Pinky and the Brain Reunion Special," a parody of similar TV specials.

None of the episodes is more unusual for the show than the three-episode story "Brainwashed," which pulls together a massive parody of "The Prisoner" (the most obvious proof that the show is not meant to entertain kids primarily), along with Europop, The Island of Dr. Moreau, dance crazes, and plenty more. The oddest thing about this arc is that it is often not funny. Frequently throughout the story, it's more exciting than anything, feeling like an action-adventure cartoon. It's matched in terms of the maturity of the story by "Inherit the Wheeze," in which Brain becomes addicted to smoking. Watching it, I couldn't help but think that there is no way this could be made today, as just portraying smoking is taboo, which prevents us from getting something so smart on a "kids" show. 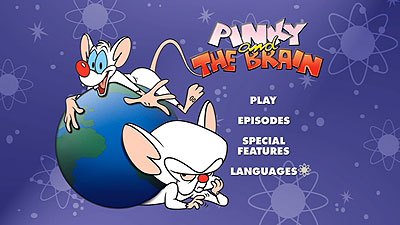 The DVDs
"Pinky and the Brain"'s final 21 episodes (and a bonus) are collected on four DVDs, which are packed in an embossed "Steven Spielberg Presents"-branded slipcase, similar to the first season with an episode breakdown. The discs are packed in a three-panel digipak with two trays, with the two discs in each tray overlapped. The discs have static, anamorphic widescreen main menus, with options to play all episodes, select individual shows, view special features and adjust languages. Language choices include English Dolby Digital 5.1 and 2.0 tracks, as well as closed captioning. Oddly, the subtitles that were on previous sets have been dropped.

The Quality
The full-frame transfers on these discs are somewhat improved from the last volume, with a bit less of the dirt that was seen last time around, while retaining the vivid color and solid image. It's transfers like these that show what can be done with hand-drawn animation. You don't see art this detailed anymore in cartoons.

The discs feature Dolby Digital 5.1 soundtracks, which come across strong and clean, with the surround speakers enhancing the sound. There's nothing dynamic about the mixes, but the bass is a nice inclusion.

The Extras
"It's All About the Fans," with Maurice LaMarche (the voice of "The Brain") and Rob Paulsen (Pinky), focuses on the show's fans, both the everyday schlub and celebrity followers. The duo chat about the fans they've met, with clips from the San Diego Comic Con panel they sat on, as well as fan interviews. While it could easily have become "Look at how great we are, with all our fans," LaMache and Paulsen's keep it light and fun, sharing stories about bare naked ladies and manicured hands for 11 minutes. 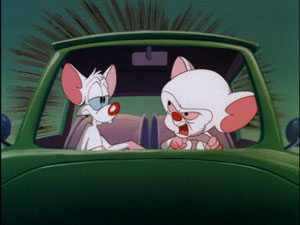 The Bottom Line
Despite it airing on three different kids network, this show was hardly aimed at children, and this season cements that fact, with episode concepts that aren't even vaguely accessible to someone born before 1980. This set isn't as funny as the previous releases, with the episodes actually focusing on stories, and interesting twists on the show's concepts. The DVDs looks good and sound excellent, while the main extra is cute, and an appropriate cap on the series. Considering this is clearly labeled the final collection, one wonders if the lightly-regarded episodes of "Pinky, Elmyra and the Brain" will ever be released on DVD. If they are, before I get a "Freakazoid" collection, someone at Warner Home Video will be getting a visit from me. Until that much-needed "Freakazoid" release, this set finale will have to do.