Of all the directors who have ever worked in Hollywood, one of the most impressive was Howard Hawks.  He was an incredibly versatile director, who not only made films in many genres; he made classics in those genres.  From war movies (Sgt. York, The Dawn Patrol) to screwball comedies (Bringing Up Baby, His Girl Friday) to hardboiled detective films (To Have and Have Not, The Big Sleep) and even gangster pictures (Scarface), Hawks left his mark on every type of film that he worked in.  He also dabbled in westerns too, and it comes as no surprise that he made some classic there too.  One of his best westerns was Rio Bravo, a classic John Wayne movie that has just been released on Blu-ray.  Not only does it look great, the disc is filled with bonus material that supplements the film quite well. 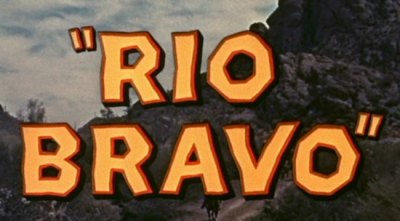 Dude (Dean Martin) used to be pretty good with a gun, but that was before a woman broke his heart and he took to drinking.  Now a washed up boozer, he lets the local toughs degrade and tease him as long as he can get a drink out of it.  When he helps Sheriff John T. Chance (John Wayne) arrest the local bad man, Joe Burdette (Claude Akins) for murder, Dude finds that he's thrown in on the side of the law in a dispute that they can't win. 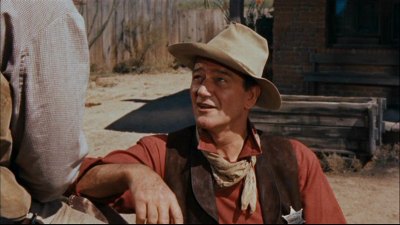 Burdette is the brother of the local rich rancher, Nathan Burdette (John Russell), and Nathan isn't going to let his brother hang.  He's got enough money to hire as many guns as he needs to release his brother, and the only people the Sheriff has on his side is a drunk, a lame old man (Walter Brennan) and, eventually, a brash young kid (Ricky Nelson).  With the odds against them and the town scared, the easy thing to do would be to let Joe go, but that's not the way Chance works.   He's been paid to do a job, and do it he will, even if it means that he'll be killed.

At one time Quentin Tarantino said that this was his favorite film of all time, and it is easy to see why.  The movie is a character study of how four men react under pressure, and while it's not totally believable it has some memorable moments that add a touch of authenticity to the film.  One of the best scenes in the film happens early on when a friend of Chance's (played by John Ford regular Ward Bond) tells him that he could probably swear in some of the town-folk as deputies.  Chance replies "Suppose I got 'em, what'd I have?  Some well meaning amateurs.  Most of them worried about their wives and kids.  Burdette has 30 or 40 men, all professionals.  Only they're worried about is earning their pay.  No, Pat.  All I'd be doing is giving them more targets to shoot at."  This is a very pragmatic look at the old western dilemma of an out-gunned sheriff, and one that makes a lot of sense. 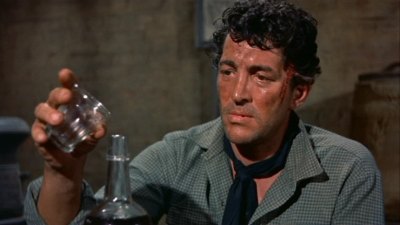 Viewed today, the movie's black and white approach to the plot seems a bit dated.  Joe Burdette is just pure evil, casually shooting a man who tries to stop him from beating a man who's down.  (He even wears a black hat in contrast to Chance's white one, causing my son to comment that "I thought that was a joke.  I didn't know you could really tell who the good guys were by the color of their hats!")  Chance and his deputies are fighting the good fight because they have to.  The moral ambiguities from movies like The Searchers or Unforgiven are no where to be found in this film, but that doesn't mean the movie isn't entertaining.

The love sub-plot between the traveling gambler Feather (Angie Dickinson) and Chance was pretty unbelievable too.  They never really showed much motivation for Feathers character, she just falls in love with the tall, rugged, and much older Chance at first sight and is willing to risk her life to help him.  The reverse is true too.  Why isn't Sheriff Chance married already, and why does he fall so hard for Feathers?  Granted she's good looking and interested in him, but he seems to be drawn to her only because that's what's expected of a hero in a western.

Howard Hawks does a great job of directing this film, creating suspense when it's needed and adding a very liberal does of humor too.  (Is that any surprise from the director of so many screwball comedies?)  Walter Brennan's character, Stumpy who spends most of the movie guarding the prisoner, is almost only there for comic relief, but Hawks directs the action sequences with style too.  The shootout in the street that takes place about 2/3 through the film is a good example of this.  The tension quickly builds when Chance is cornered by three gun-totting hombres, but the actual gunfight is over in the blink of an eye.  This is much more exciting, and realistic, than everyone jumping behind conveniently placed barrels and having a prolonged battle.  Hawks once said a good movie is one with three good scenes and no bad ones, and he's right.  This film certainly has several good scenes, and that makes it memorable.

When the credits started to play at the beginning of this film, I was honestly shocked at the amount of grain and dirt this film had.  Luckily it quickly subsides, and the movie looks pretty good after the credits are over.  This film has been restored, but it doesn't look nearly as good as The Searchers.  There is a fine grain throughout the film, and even after the credits are done there are a few instances of spots on the image.  These aren't significant defects, especially for a film that's nearly 50 year old, but they are present.

Filmed in Technicolor the 1.85:1 widescreen image had some very strong and even colors.  On the digital side of things the disc looks very good too, with posterization being nearly nonexistent.  Near the end of the film Dean Martin wears a shirt with thin vertical and horizontal colored stripes that form small squares.  These lines were very tight and even, with no aliasing (jagged stair-step effects) or artificial colors created when he moved.  Even though there were some defects, this is a very good looking transfer.

The movie is presented with the original mono soundtrack in English as well as a French dub.  I was very happy with this; I'm not one who feels that every classic film should be remixed to 5.1.  The dialog was clean and easy to discern, and just as important there wasn't any background noise.  Hiss and hums frequently plague movies from this time period, but this track has been cleaned up to eliminate them.  The audio was hampered by the technology available at the time, there isn't much dynamic range and the gun shots sound a little flat, but it doubtlessly sounded that way during the film's premier.

Warners does a fantastic job when it comes to releasing classic films in high definition, and this disc in no exception.  This disc is filled with bonus features, porting over all of the extras from the two-disc special edition of the film.  First there is a commentary track with director John Carpenter and film historian Richard Schickel.  Both of these men admire this film, and they had some interesting things to say about it.  They relate behind the scenes anecdotes, talk about the women in Hawks' movies and give some background to the film.  Their tracks were recorded separately and then spliced together, and while it would have been a bit more interesting to have these two men converse together about the movie, this is a solid commentary track.

Next up is Commemoration:  Howard Hawks' Rio Bravo, a 33-minute documentary on the film made for the 2-disc SE released a month before this Blu-ray edition.  This was easily my favorite extra, with ample interviews with directors and film critics as well as co-star Angie Dickinson, the only surviving member of the cast.  This was an entertaining and insightful look at the film.  An installment of Men Who Made Movies, focusing on Howard Hawks is also included.  This 50+ minute documentary looks at the man's career and examines the themes that flow through his movies.  Told with copious clips and an interview with the director from 1973, this is a nice overview, though a little stale in its style.  Finally there is an 8-minute featurette on the location used to shoot the movie:  Old Tucson: Where Legends Walked.  Living in Tucson for several years as a child, I've been to the movie set/tourist attraction several times and it was nice to see this short piece dealing with it, even if there isn't a lot of substance to the piece.

Rio Bravo is a very good film, though its stark black-and-white view of the world is a little dated now.  John Wayne gives a strong performance as usual, but it is director Howard Hawks that really shines, putting together an exciting film filled with humor that never drags during its 2 hours and 20 minute run time.  The restored film looks great on this Blu-ray disc, with only minor grain and a couple of spots that slightly mar the presentation.  Filled with substantial extras, this is a disc that is easy to recommend.