"I - I ain't got no mama now
She told me late last night, 'You don't need no mama no how'
Mmm, mmm, black snake crawlin' in my room
-From "Black Snake Moan" by Blind Lemon Jefferson

Okay, imagine you're driving to work. It's Monday morning. You had a nice weekend, but you're groggy and still tired because you went to bed too late the night before. The last thing you're looking forward to is a long day of hard work. And as you're driving, hoping that the coffee you poured on your way out the door will give you enough pep to make it through the morning, your eye catches a billboard. You see a trashy-looking white girl wearing practically nothing. Well, this is certainly enough to warrant a closer look. In doing so, you notice that the girl has something around her waist. You might do a double take as you realize that "something" is a chain with a lock. Then, following the chain, you see it's being held by an old black man. With a start of recognition, you realize the girl is Christina Ricci and the man is Samuel L. Jackson. The tag line on this billboard is simply: "Everything is hotter down south."

This was the billboard for Black Snake Moan, writer/director Craig Brewer's follow-up to his Oscar-winning 2005 flick, Hustle and Flow. And the above paragraph aptly describes my first time seeing said billboard (except for the coffee, which was added as an embellishment to create dramatic tension). Suffice it to say, after seeing that billboard, there was no way I was going to miss Black Snake Moan, and you shouldn't either.

Samuel L. Jackson stars as Lazarus, a former blues man who gets more blues than he wants when his wife runs off with his brother. Christina Ricci stars as Rae, a Southern girl with an unfortunate case of nymphomania. Despite this, she has a loving relationship with Ronnie (Justin Timberlake), her high school boyfriend. As the film starts, Ronnie is going off to war, and Rae simply cannot control herself. She goes looking for sex anywhere she can find it, which eventually leads to her being beaten and left for dead on the road outside of Lazarus' house. Lazarus, meanwhile, has taken to shutting himself away as to avoid dealing with his wife's infidelity. But he does go out far enough to find Rae, bloody and coughing. 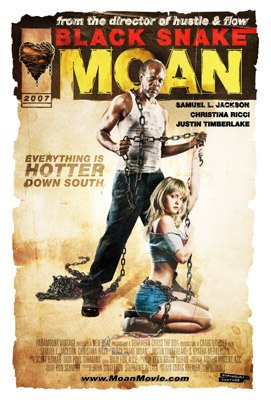 He takes her in and cares for her. Going into town to get some medicine, he asks around about Rae and discovers her "sickness," as the town folk call it. And Lazarus, God-fearing man that he is, decides that God placed Rae on his doorstep so he could cure her. Enter the lock and chain.

Black Snake Moan has the word "exploitation" written all over it. But, in truth, the movie couldn't be less exploitative if it tried. Craig Brewer has expertly written a good, old-fashioned morality tale, wrapped in the guise of a steamy sex romp. Don't get me wrong, there is sex in the film, and nudity, and many suggestive scenes besides. But they're all done in service to the story and its themes, and is not there simply to show another pair of breasts. Brewer writes strong characters and gives them meaningful motivations, making every scene feel important and necessary.

Sam Jackson is at the top of his game as Lazarus. After artistically slumming in movies like Snakes On A Plane, The Man, and the Star Wars prequels, it's almost a shock to see him give such a multifaceted, deep, and honest performance. Christina Ricci matches him pound for pound in a fearless performance that stands above everything else she has ever done. Also, while this may seem shallow and immature, I should mention that Ricci is either nude or half-nude through most of the film, making this a must-see for many men already.

The other star of the movie is the blues music that pervades the soundtrack. Brewer has said on more than one occasion that music inspires him to make films, and it's very clear here. The blues is as much a part of the film as anything else, with the music making up many of the film's most essential and powerful scenes. Lazarus lives and breathes the blues, even when he isn't making music. Rae comes to appreciate the artform as a more suitable and satisfying outlet for her fears than sex ever could be.

Craig Brewer has crafted a truly effective, tantalizing, and enjoyable movie with Black Snake Moan. It's arresting from beginning to end, and filled with fantastic performances. I can't wait to see what he does next, because if it's even only half as good as what he's already done, it will still be great.

The Image: Paramount Pictures presents Black Snake Moan in its original aspect ratio of 2.35:1 in this 1080p AVC encoded transfer. The film is an impressive sight to behold, with both fine detail and bold colors. For a movie with low budget, maybe even grindhouse roots, the film is shot impeccably, with barely a hint of grain. There are no marks to be found on the source print. I was thoroughly impressed with the picture quality here. One of the better recent Blu-rays I've seen.

The Audio:
Paramount still shamefully shuns the superb sounds lossless audio is capable of, providing Black Snake Moan with just a standard Dolby Digital 5.1 track. While the mix provided is certainly rich with details and textures, especially during the music-based sequences, I found myself constantly wishing for an uncompressed PCM or Dolby True HD track. What we get sounds very good, but if this were released with lossless audio, I'd rebuy it.

The Supplements:
This Blu-ray edition of Black Snake Moan ports over all of the extras from the simultaneously released DVD version. The deleted scenes are in 1080i, and the rest are in standard definition.

Commentary by Writer/Director Craig Brewer: Okay, I'm going to go ahead and make an embarrassing admission. Up until I heard this commentary, I thought Craig Brewer was black. Can you blame me? He made a movie about rappers, and then a movie about a bluesman, and well, he just took so much from black culture that I assumed he was black. I was wrong, and I'm sorry. Turns out he's white, as I discovered by listening to this commentary. Anyway, Brewer does a great job of discussing the film and its themes. He's consistently engaging and often illuminating.

Conflicted: The Making of Black Snake Moan: A half hour doc about the making of the movie. Mostly interview footage with behind the scenes footage playing under the interview audio. There's a good cross section of cast and crew interviewed here, although it's more crew than cast.

"The Black Snake Moan:" An in-depth look at how Craig Brewer used the blues, and specifically the song "Black Snake Moan" by Blind Lemon Jefferson as inspiration for the film. Most of the featurette is devoted to the filming and construction of the sequence where Samuel L. Jackson sings the aforementioned tune to Christina Ricci.

Rooted In The Blues: A look at how Craig Brewer chose the blues music used in the film.

Deleted Scenes: Presented in poorly encoded 1080i, we get several high quality deleted scenes. Included is a scene where Lazarus spends time talking to Rae as he breaks her fever, a scene where he talks with his love interest (S. Epatha Merkerson from TV's "Law & Order"), and an utterly incredible flashback scene detailing the meeting between Rae and Ronnie which is as good or better than any scene that made it into the final cut.

The Conclusion:
Black Snake Moan takes everything that made Hustle and Flow great and ups the ante. From the risque story to the stellar performances from Jackson and Ricci, Black Snake Moan does everything right. The film came out in February, and we're now halfway through the year, but it's still one of, if not the best film of 2007 to date. This Blu-ray comes loaded with impressive picture and sound, and all the DVD extras. Do yourself a favor and buy this disc the day it comes out. Highly Recommended.