It seems that all the big budget movies now a days are either sequels of earlier successful films, based on TV shows, or adaptations of comic books (or sequels of movies based on comic books.)  It's a bit surprising that Hollywood keeps going back to comic books after so many of the movies that are based on the four color heroes are roundly slammed by the critics and movie going pubic.  (Electra, Incredible Hulk, and Catwoman just to name a few.)  One more title to add to the "comic movies that suck" list is Ghost Rider, a Nick Cage action film that is filled with eye-popping images, some horrid over acting, and an incredibly weak script. 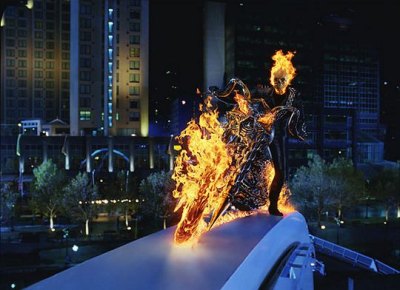 Johnny Blaze (Matt Long) is a daredevil stunt rider.  Along with his father Barton (Brett Cullen) he performs motorcycle jumps and stunts with a small circus.  The father and son team don't get along that well, but when Johnny discovers that his dad has cancer he sells his soul to Mephistopheles (Peter Fonda who seems to be channeling Jack Nicholson) in exchange for having his father cured.  Barton is cured, and Johnny decides to leave the circus and run off with his girl friend Roxanne (Raquel Alessi).  Things aren't quite that simple however.  Though Barton is well, Mephistopheles kills him during his next performance and warns Johnny never to get involved with anyone again.  After all, the young Blaze now belongs to the devil who has big plans for him.

Fast forward a number of years.  Johnny (now played by Nicolas Cage) is now a famous daredevil.  He fills auditoriums with people wanting to see his jumps and there are videogames based on his stunts.  No matter how dangerous a jump or horrible a spill, Johnny gets up unhurt, it's almost like he's being protected. 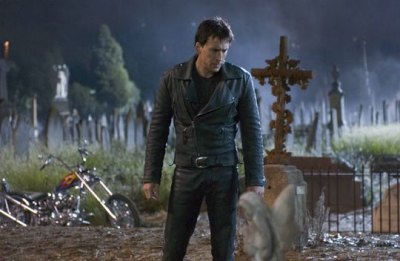 Things seem to be looking great for Blaze.  He's famous, respected, and rich, and he even reunites with Roxanne (now played by Eva Mendes.)  For some reason Roxane has only aged about ten years while Blaze has aged 20, but that doesn't seem to bother anyone in this movie.  Before Johnny can rekindle the blaze (no pun intended) with his paramour from years before, Mephistopheles appears and announced that he has a use for the cyclist.  It turns out that Mephistopheles' son, Blackheart (Wes Bentley), has turned against him.  Along with three other demons from Hell, Blackheart is searching for the Contract of San Venganza that will allow him to overthrow his father and create Hell on Earth.  In order to aid Blaze, Mephistopheles gives him the power of the Ghost Rider.  With a flaming skull for a face and a bitchin' cycle to ride, it's up to Blaze to prevent the unthinkable.

This movie had a lot of potential.  Being a fan of the comic since the mid 70's, I was looking forward to this adaptation.  After all, the comic is very visual and would translate well to the silver screen.  What could be more exciting than a flaming skeleton on a fire-filled motorcycle battling demons from Hell?  While the film is filled with some fantastic and impressive visuals, nearly every other part of the production is lacking.  First the script is filled with so many holes it's not funny.  From Mephistopheles telling Blaze to find Blackheart and then him driving down the street to his exact location to the inconsistencies with the Ghost Rider legend as presented in the film, it's hard to just not scoff at the plot.  The dialog is pretty bad too, filled with lines that writers of B-movies in the 50's would have thrown out for being too clichéd and hackneyed. 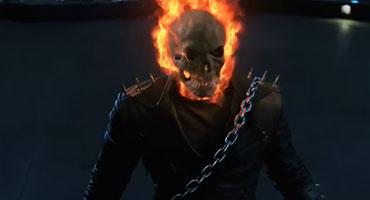 While these are significant flaws, the thing that really damns the movie (again, no pun intended) is Cage himself.  Now don't get me wrong, Nicolas Cage is a good actor, he just didn't show it off here.  He constantly overacts and is so hammy that it is unintentionally comic.  Cage can't even point to anyone in the movie without it being humorous.  When he does, he forms his hand into a claw and partially extends his index finger.  It looks like he's Verbal Kint from The Usual Suspects.  When he has to deliver a line, it's even worse.  Why he thought such a technique would help the movie is anyone's guess (in the extras he said that he wanted this to feel like an old horror movie) but it really ruins an already sub-par movie.

The one person who did an excellent job was Sam Elliot.  Every time he was on screen it was like a breath of fresh air.  He played the caretaker at a cemetery who helps Blaze out after he turns into Ghost Rider and does a wonderful job.  They need to make a spin off movie with that's devoted to his character, but with an intelligent script of course.

This Blu-ray disc presents the movie with its original aspect ratio of 2.4:1, and does quite a good job too.  The film is filled with eye candy and there are several scenes that would make excellent demo material.  When Ghost Rider is driving up the side of a skyscraper and then engages in a battle with a helicopter at the summit is some of the coolest (though admittedly silly) scenes in the film and this really pops off the screen.  The level of detail is excellent too, with every crag and line on Nicholas Cage's face being reproduced with horrifying accuracy.

The CGI looks especially good on this BD.  While you can still tell that it was generated by a computer, Ghost Rider, as well as his motorcycle, look real enough that you're not constantly reminded that they are artificial.  They don't have that cartoony feel that many CGI figures do. *cough* The Hulk *cough*.   Though the movie itself isn't great, the images are impressive.

Sony gives this disc an uncompressed 5.1 audio track as well as a Dolby True HD option.  (There's also a French dub in 5.1.)  There really isn't much difference between the two, and viewers will be pleased with either selection.   The movie has a very dynamic and active soundtrack and these tracks reproduce that faithfully.  Right from the start you know you're in for an audio ride.  The credits start with a motorcycle's view of driving through tracks of fire, with the engine revving and music blaring, and when that finishes the scene segues into a carnival scene, with noise from the attendees and the barkers filling the room.  The entire soundstage is put to good use, especially during the action sequences, with battle sounds and motorcycle roars coming from all corners of the room.  The reproduction was flawless, with no distortion or other common problems.  It's only too bad that the script to the film wasn't as impressive as the audio that accompanies it.

This disc has some solid extras, all of which are presented in 1080p, which is a big plus.  The negative is that they don't port over all of the bonus material from the SD release.  It boggles the mind that studios like Sony don't realize by now that people enjoy extras.  If they want more people to adopt their next generation format, they have to stop omitting bonus material from those releases.  *sigh*  If they really wanted to drive sales of Blu-ray players, they should include MORE featurettes on the more expensive BDs.  Getting back to this disc, people who splurge for the BD won't get too see the featruette Sin & Salvation: Chronicling 40 Years of Ghost Rider Comic Book History and a series of animatics.

What do we get on this disc?  First off there are two commentaries, one with producer Gary Foster, and the other with both writer/director Mark Steven Johnson and visual effects supervisor Kevin Mack.  I have to admit that I only sampled these two commentaries, sitting though this movie two more times is more than this reviewer could take.  They both seem about average from the sampling I had, with Johnson inexplicably stating that Cage did a good job on the film.

There are three featurettes included also:  Spirit of Vengeance, Spirit of Adventure, and Spirit of Execution.  These basically form an 82-minute 'making of' documentary that was pretty good.  It was more than the fluff pieces that often appear on DVDs though there was more than enough back-patting going on.  These documentaries look at the genesis of the project, the filming, etc. and include interviews with basically everyone associated with the movie.  There was a lot of interesting information included and in a lot of ways this was more entertaining than the film itself.  I thought it was very interesting when Mark Steven Johnson was talking about casting Cage.  He said that Nicolas came to him and said that though he's been vocal at wanting to play Superman and other comic book characters, that Ghost Rider was the one hero he's always wanted to play the most.  Yeah right.  Cage named his son Kal El (Superman's Kryptonian name) not Johnny Blaze.  It sounds like bullshit to me, but it got him the gig.

Ghost Rider is a fair movie at best.  Though the visuals are outstanding and this BD reproduces them wonderfully the script is bad and Cage's acting is the most horrific part of the film.  This is worth watching especially if you're a comic fan or in the mood for a mindless film, if only for the impressive scenes when the Ghost Rider is on the screen.  Make it a rental though, as there's little repeat viewing pleasure in this.