Paramount // Unrated // July 17, 2007
List Price: $38.99 [Buy now and save at Amazon]
Review by Stuart Galbraith IV | posted July 22, 2007 | E-mail the Author
First things first: Yes, CBS / Paramount did somehow, some way manage to pack all 39 half-hour episodes of Gunsmoke - The First Season into that standard size DVD case. In a marvel of engineering, all six single-sided discs are crammed rather comfortably, actually, into its see-through case, which enables synopses of all the episodes on the flip-side of the DVD sleeve. A good thing, too, considering that Gunsmoke is one of the longest-running series in the history of the medium, anywhere in the world. The show ran for 20 years - some 635 episodes (!) - so I guess they had to do something; with the kind of complete season boxed sets labels once used, Gunsmoke's long run would fill up a small garage. 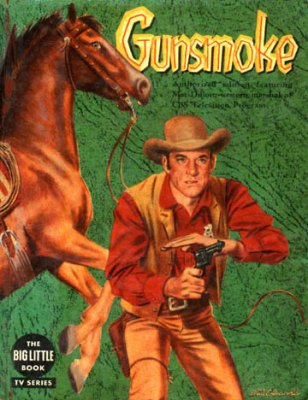 Gunsmoke had been one of radio's last hurrahs, a highly-regarded drama that ran from 1952 to 1961. Starring William Conrad as U.S. Marshal Matt Dillon, Howard "Floyd the Barber" McNear as Doc Adams, Georgia Ellis as prostitute Kitty, and Parley Baer as Dillon's assistant (not deputy) Chester, it nudged the Western genre into a new age of maturity - just as the movie Westerns of Anthony Mann, Delmer Daves, Budd Boetticher, and others were doing simultaneously. When, like almost all the most-popular radio shows of the era, the decision was made to adapt Gunsmoke for television, a similarly adult approach was decided upon.

It was almost a revolutionary move. Just a few years before, the B-Western had essentially staked a claim on television's airwaves. When the medium was still in its infancy, B-Western stars like William "Hopalong Cassidy" Boyd, Gene Autry, and Roy Rogers, as well as radio star/B-Western fixture The Lone Ranger, all pretty much gave up making 60-70 minute programmers and joined what turned out to be the incredibly lucrative world of TV. These shows were basically half-hour versions of the same kind of unpretentious B-Westerns these stars and characters had been making for years. These shows were hugely popular with the kids but adults generally tuned out.

Gunsmoke was heralded as TV's first "adult Western" - by no less an expert than John Wayne, who introduces the first episode. Star James Arness had been a protegee of Wayne's, though reportedly Arness had no idea his friend had filmed the intro until the episode aired. Arness had won the role of Matt Dillon from William Conrad, who even in 1955 was already too beefy and balding to be seriously considered. (Conrad's steely blue-gray eyes couldn't have helped, either; until his detective series Cannon, the actor usually played villains in the movies.) Another actor heretofore associated with villainous parts, Milburn Stone, was cast as crusty Doc Adams, and Amanda Blake, a very minor actress until Gunsmoke, played barely-coded prostitute Miss Kitty (Russell). Dennis Weaver, who had been cutting his teeth in smallish supporting roles in Universal's high-end B-Westerns, was cast as Deputy Chester B. Goode.

And therein lay the key to Gunsmoke's early success. It doesn't attempt the kind of grandeur of widescreen movie Westerns. The show is at its best tackling intimate drama, in simple but compelling situations confined to a handful of characters. (Doc and Miss Kitty especially frequently do not appear at all in some episodes.) One good, early example is "Home Surgery," in which Matt and Chester, returning from a job, help a young woman (cult actress Gloria Talbott) whose father (Joe de Santis) is in bed with a gangrenous leg. Miles from the nearest town, Matt makes the unenviable decision to amputate the leg himself lest the man die of blood poisoning.

(Mild Spoilers) Somewhat unusual by television's standards, for all of Matt's efforts, the man dies anyway, and the Marshal faces a new problem: the man responsible for the father's injury is his daughter's no-good boyfriend (Wright King), who may have deliberately been trying to murder the old man.

Other shows similarly keep their dramatic situations tight and compact. In one of his very first writing jobs, Sam Peckinpah penned a taut little episode called "Yorky," about a white boy (Jeffrey Silver) raised by Indians and rescued by Matt after he's been shot by horse rancher Abe Brant (Howard Petrie), a friend of the marshal's. The show somewhat flips expectations about victimized ranchers and marauding Indians, and offers Arness with another commanding teleplay.

In more ways than one, 6' 7" Arness towers over Gunsmoke. Already craggy-faced at 32 (when the show began), the actor has a handsome worldliness that fits the character well. More importantly, Matt Dillon is a poker-faced man of relatively few words who intriguingly keeps his emotions and opinions close to his chest. At a time when confessional characterizations in teleplays by Paddy Chayefsky and Rod Serling were all the rage, Arness's low-key, watchful and circumspect marshal is eminently watchable.

Doc and Kitty are more standard Western characterizations, with the radio Doc's alcoholism and Kitty's profession rendered much less colorful by Standards & Practices. Chester might have slipped into another Western movie stereotype, the Comedy Relief, but Weaver (no shrimp at 6' 3") infuses it with an eccentric but very naturalistic humanism that's an excellent counterpoint to Arness's Matt Dillon.

Incredibly, the first 26 shows were all directed by one man, Charles Marquis Warren, who also wrote or co-scripted many of the shows. (Warren later produced and directed many other famous TV Westerns.) Late in the season, directors Robert Stevenson (later famously associated with Walt Disney) and Ted Post alternated helming chores. Though Peckinpah was the most famous writer to emerge from Gunsmoke's first year, probably more than anyone else writer John Meston helped shape the direction of the series. He reportedly wrote 183 Gunsmoke radio scripts and 196 episodes - nearly a third - of the TV series. Understandably, he didn't have much time to do anything else. 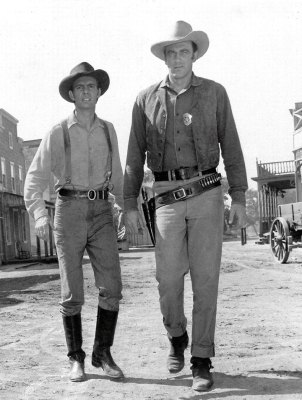 The back of the DVD ominously warns that "some episodes may be edited from their original network versions." However, the shows all seem complete and not-time-compressed, each running about 26-and-a-half minutes. Possibly CBS / Paramount is referring to the "brought to you by..." plugs for the show's sponsor that immediately followed Matt's opening titles gunfight, which here have the same abrupt fade-out as seen in syndication. But even the show's ads are included as an Extra Feature: On disc one, Matt and Doc extol the virtues of L&M cigarettes. (Mmmm. Smooth.)

Each single-sided disc features six-seven shows, all of which look just great, up to the high standards of other CBS / Paramount titles like Perry Mason, Mission: Impossible and Hawaii Five-O. The Dolby Digital mono is clean and clear, and the show is closed-captioned.

The intimate, confined dramatics of Gunsmoke's above average teleplays and the commanding performance of star James Arness and Dennis Weaver's humanistic one makes this a Western series a sure bet for genre and classic television fans. Highly Recommended.