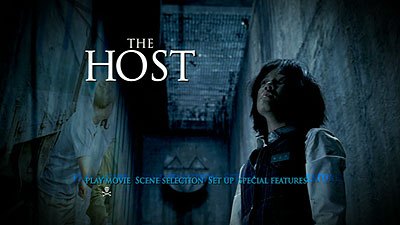 
The Movie
It's the rare monster movie that lets you see the creature right off the bat, and then hides it away, letting the human characters be the stars, and their interactions advance the plot. The Host is one of those films, as it follows the Park family, as it bands together, against the monster and the government, to find their youngest member, Hyun-seo, who was taken by the creature. Along the way, they run into frequent troubles, with everyone they encounter working against them and preventing them from saving Hyun-seo.

The creature, born of U.S. pollution in Korea, is as unsubtle a statement as could be made about the world's view of the United States, as it puts a foreign country in peril through no fault of its own, and when it can't solve the problem, it needs America to step in, take over and clean things up. But the film doesn't obsess over politics (at least for the bulk of the 119-minute runtime,) as it much prefers the Parks' dysfunction over any international scraps, keeping a close eye as frequent screw-up Gang-Du, his siblings, Nam-il and Nam-Joo, and their father Hie-bong, battle each other out familiarity, more than contempt. Unfortunately, focus is not the film's strong point, as it moves in fits and starts, bouncing between Hyun-Seo's struggle for survival in the monster's lair and her family's efforts to save her. 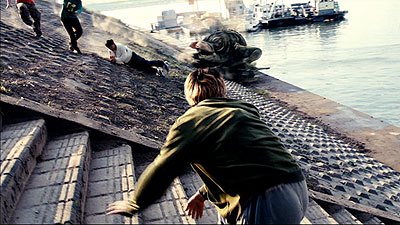 For a film that's peppered with moments of comedy, the more serious scenes manage to maintain a believable tone, thanks to some fantastic audio design and a score that's as tense andnerve-wracking as a Hitchcock film. Throw in some beautifully kinetic and artistic cinematography, and you've got a dramatic cult film that represents the best qualities ofidiosyncratic Asian filmmaking. The final climatic battle between man and beast alone would be enough to earn this film a spot in the film history books, but it's matched in tenacity and monstrous goodness by the opening scene, one of the most original, well-filmed monster attacks in recent history.

Everything in between, on the other hand, could be thrown in a blender and poured out on screen, as, in the end, any scene that doesn't feature the monster or Gang-Du ends up being a bit meaningless in the big picture. And those scenes that do feature the monster or Gang-Du just aren't as fun as one would have expected from the hype that lead up to the film's release. Sure, there are some big-time scares in places, but the sense of fun or excitement you might have expected just doesn't manifest itself before the film unfurls its limp ending. There can be no real complaints though about the monster, who comes to terrifying life on-screen, and whose moments and actions make it a creation for the ages, which will influence filmmakers yet to come.

Oddly, this is one of the few times where I would recommend watching a foreign film with an English dub, as the laughable quality of the voices and dialogue, along with the natural disconnect between the voices and physical speaking, give the film an added layer of monster-movie cheese, putting it up there with the Godzilla's of the world in terms of campiness. It's not likely intentional, but it's right there in front of you, and can't be counteracted by the finely-tuned visuals created by the director and crew. 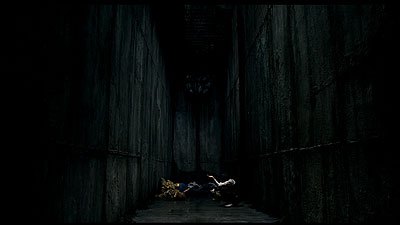 The DVDs
The Host is available in both a one-disc and two-disc version, though this disc is of the two-disc collector's edition, which comes packed in a standard-width, two-tray keepcase with a nice embossed slipcover. Both discs have atmospheric animated, anamorphic widescreen main menu, with disc one holding options to watch the film, select scenes, adjust languages and check out the special features, while disc two lists the extras. Audio tracks include English Dolby Digital 5.1 and 2.0 tracks and Korean Dolby Digital 5.1 and 2.0 tracks, while subtitles are available in English and Spanish, along with closed captioning.

The Quality
The anamorphic widescreen transfer on this DVD is excellent, with proper color, capturing the dismal, cold settings, and a nice high level of detail to go with an overall sharp image. There was no noticeable dirt or damage in the image, though some grain was noticeable during darker scenes, while digital artifacts weren't obvious at all.

The audio you use will really effect the way you take this film, as the booming bass and nicely-mixed dynamic effects on the Korean 5.1 track being the monster to true life in your home theater. There's some much exceptional sound design in this film, that it would be a shame to watch it with anything less than a full surround track. While the action is captured well, the dialogue is handled correctly, and the stunning score is brilliantly clear and separate from the rest of the sound.

The Extras
Disc One, which is included in both versions, starts out with an audio commentary by director Bong Joon-Ho, who is joined by Tony Rayns, a noted film critic who covers Asian films extensively. Rayns acts as moderator for Joon-Ho, who thankfully delivers the commentary in English. Considering the complexity of the monster and the unique nature of the film, it only makes sense that Joon-Ho spends a good deal of time discussing the how and why of the special effects, along with info on the inspiration for both the film and the creature, and plenty of details about the production. Joon-Ho does an excellent job on the track, though Rayns' help is certainly part of why the track moves along so well. The commentary is supplemented by Joon-Ho's "Reflections," over five minutes of the director apologizing on-screen to actors and people he may have "wronged" in making the film. To say this is a unique extra is putting it lightly.

Also included on the first DVD are deleted scenes, which flesh out the affect of the monster's attack, but were appropriately removed from the final film. The best part of the nearly 24 minutes of footage, is the insight into how Joon-Ho planned to sculpt his story, with extra bits and pieces, instead of many full scenes or alternate takes. The cut monster scenes will likely be the most interesting to fans of the film though. They are joined by over four minutes of complete news clips, seen in the background (and occasionally foreground) of the film.

The second disc kicks off with an eight-part documentary on the making of the film, which runs approximately an hour, and covers the film's storyboards, direction, production, set design, special effects and sound. If there's something you wanted to know about the movie, and it wasn't covered in Joon-Ho's commentary, it's probably in here, as the piece focuses in on most aspects of the production, with plenty of looks behind the curtain, at how everything came together. Or...

You can find it in "The Creature," another multi-part featurette, with seven parts totaling over 85 minutes, looking solely at the creation of the monster. Considering how much a part of the film's hype was the creature, it makes sense that the disc spends a lot of time covering it, and this featurette nails it, with tons of behind-the-scene footage and interviews, including a lot of material from the well-known Weta Workshop.

20 minutes of coverage of the crew is broken down into three categories: the staff, the production team and the visual effect supervisor. It's pretty obvious at this point that no stone is left unturned on this DVD, with the staff section being cute, as it's styled after a scene in the film. Another seven-part epic, this time 27 minutes long, looks at the cast, including the stars and extras, with casting videos, on-set footage and interviews with the cast presenting a full picture of the acting portion of the equation.

We're not done yet, as a gag reel, which features silly animation renderings and the cast goofing around, and a sentimental five-minute look back, titled "Saying Goodbye," are joined by Korean trailers for the film, wrapping up the extras.

The Bottom Line
Though the film didn't deliver the thrills the trailer promised, it's an admirable attempt to do something grand and unique, and in some ways it succeeded, especially when it came to the way it portrayed its titular monster. But as an overall film, it falls a bit short of greatness. The DVD, though, looks and sounds great, which is a key for this film, while the two-disc set has every extra you could ask for, covering just about every aspect of the film's creation. Fans of Asian horror and monster movies will want to check this film out, but a rental is a good idea, as it won't be everyone's cup of tea.