"In my life, tumbling down is easy...but if I can endure it near you, I'll probably find the ultimate paradise."

Based on the Paradise Kiss manga by Ai Yazawa (and published in the States by Tokyopop), the animated version follows the same basic narrative line as the comic, albeit much faster. By the beginning volume 2, good girl Yukari has jumped all the way into the deep end with her new arty, fashion-obsessed friends. She has left home and school in order to be their model for an upcoming fashion show at their liberal arts school. At the same time, Yukari is also becoming a professional model, which may ultimately provide her the tools to fix the broken bits of her life.

Paradise Kiss is essentially a misfit teen drama. Sheltered young girl meets oddball outsiders and learns new things about herself by joining their crew. In this case, it's Miwako, the adorable pink-haired Lolita, her punk rock boyfriend Arashi, the elegant transvestite Isabella, and the aloof, seductive clothes designer George. This blue-haired Don Juan is the leader of Paradise Kiss, the clothing label the club hopes to launch with the assistance of Yukari's good looks.

The crux of Paradise Kiss is not the fashion, however--even though the animators show an incredible attention to detail throughout the show. Not only is every outfit expertly rendered, but the backgrounds are packed with carefully chosen props, including analogues for real-world posters decorating every wall. The animation is beautifully colored and absolutely smooth from start to finish. There are much less abstract or exaggerated tangential sequences on these four episodes than were found in volume 1, but you will barely notice they are gone.

That is because what really makes Paradise Kiss a compelling series is the dramatic tangles the adolescents find themselves in. Unlike most entries in this genre (including my beloved Peach Girl), Yazawa's story is not some fluffy soap opera. It's very frank and often dark, and so the material has a weight that you don't often find in similar programs. This quartet of chapters actually shows Yukari losing her virginity to George, who is relatively cold, calculated, and self-absorbed in everything he does. This coupling causes concern for Yukari's classmate, Tokumori, who worries for her now that she is out on her own. Before running into the ParaKiss kids, Yukari carried a torch for Tokumori, so his interest now is bittersweet.

Further complicating all of these connections is the fact that Tokumori also has a past with Arashi and Miwako, whom he enlists to try to keep their friend away from George, something Arashi only goes along with because he's afraid of the connection between his current girlfriend and former best friend being rekindled. These are difficult things to deal with in the adult world, but inject them with the exaggerated coloring teenage hormones provide, and they become dire. Rather than overplay it, though, the director's maintain Yazawa's dry, almost distant tone. The overhanging dread could also be called ennui.

One other new aspect that I found interesting in Paradise Kiss, vol. 2 was the way more adult, familial roles are slowly entering the secret world of the children. Miwako's older sister and George's mother are both introduced, and in a bizarre visual twist, they both look like they could also be high school students. In contrast, Miwako's sister is a responsible clothes designer who runs her own business, while George's mother is a walking object lesson for Yukari of what not to do.

All in all, Paradise Kiss is smart, involving, and great-looking. Rather than coasting on a simple formula, vol. 2 gives us more details from the complex narrative line that runs through the show (there is one more volume to go). It's a cut above in the teen soap opera genre, as heavy as other shows are light, but all the more special for its unique style. 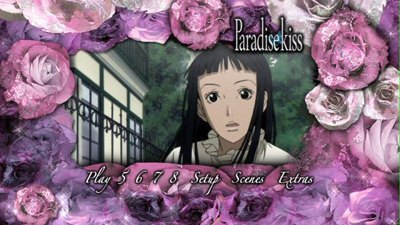 Video:
Paradise Kiss is lovingly rendered in an Anamorphic Widescreen 16:9 transfer. The colors are beautiful, and the resolution perfect. It's a great looking animated program, and the studio treats it with the highest possible regard here.

Sound:
Just as the image quality is superb, so too are the sound options nicely done. Though there is no high-grade 5.1 mix, you can watch either the Japanese audio or the English dubbed version in 2.0. I prefer the original, largely for many of the same problems I had with the dub on volume 1 (George with a British accent pushes the pretentious meter way over the top). The mix itself is quite strong, with lots of background atmosphere, particularly the "natural" sound of the ParaKiss kids listening to music on the radio.

The English subtitles are well-written and easy to read.

Leading the pack is a 21-minute 45-second roundtable discussion about working on the series with the original Japanese voice actors who played Arashi, Miwako, Isabella, and George.

For those who like the specially chosen J-rock used in the anime, there is a 20-minute concert from the record release party for the Babys, who play quite a few songs in the show. You can also watch a special promo video recutting footage from the cartoon using the theme song performed by Tommy february [sic].

A gallery of 7 character sheets, three Geneon previews (including the live-action Ai Yazawa adaptation Last Quarter), and a DVD credits section fill out the bonus menu. There is also a DVD-Rom preview of the manga version published by Tokyopop.

And lastly, the DVD is packaged in a clear plastic case, allowing you to reverse the double-sided cover if you prefer one front image over another.

FINAL THOUGHTS:
There are so many aspects of Paradise Kiss, vol. 2 to make it Highly Recommended, it's hard to know where to begin. What could just be a run-of-the-mill adolescent sudser is turned into something special by preserving the sense of style that characterizes the original Ai Yazawa manga, as well as maintaining her often risky storytelling choices. Though the teenagers in this drama live in a somewhat unrealistic world, designing clothes and forming secret clubs in conjunction with an artsy high school, the things they go through--particularly sex and romance--are real, carrying with them actual consequences. On one side, you root for their success in their sartorial endeavors, and on the other, you bite your nails hoping they'll get through with their hearts in one piece. All the while, you can't help but keep coming back to see what comes next. 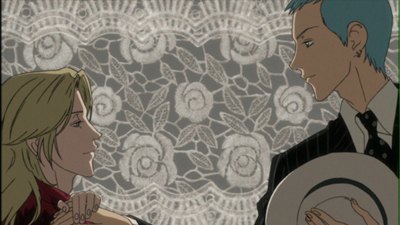