Scent of a Woman (HD DVD)

Director Martin Brest isn't very prolific, but when he does make a movie, it gets talked about.  He was behind the camera on Beverly Hills Cop, he made the great buddy picture Midnight Run, and made death look sympathetic and sexy in Meet Joe Black.  Even when he fails he does it in a big way.  His latest film was the über-disaster Gigli.  Before that catastrophe, back in 1992, Brest directed Al Pacino to his one and only Academy Award in Scent of a Woman.  This heart-warming film that never becomes sappy or maudlin is now available on HD DVD and is a great addition to any HD collection. 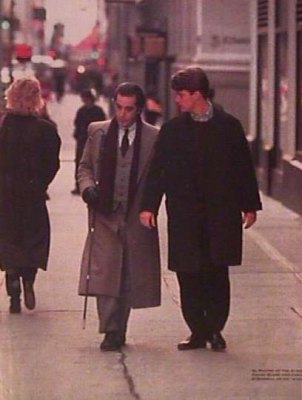 Charlie Simms (Chris O'Donnell) is a junior at prestigious prep school, but he really doesn't fit in.  While all of the other students are the sons of the rich and famous, Charlie is there on a scholarship he won for academic excellence.   He's quite and serious, not like the boisterous offspring of the wealthy that populate his school.  Right before Thanksgiving recess Charlie and another student George witness some kids setting up a prank that targets the headmaster and his new Jaguar.  Knowing that George and Charlie are the only two who can identify the culprits, the headmaster pressures them to talk and when they won't schedules an open meeting of the disciplinary board for the following Monday.  He promises the two boys that they'll be expelled if the don't talk, and offers Charlie admission and a full scholarship to Harvard if he squeals.

It is with this problem weighing heavily on his mind that Charlie goes to the job he's agreed to take over Thanksgiving; taking care of the blind Lieutenant Colonel Frank Slade (Al Pacino) while his niece's family is away.  Slade is a tough, caustic, brash individual who isn't easy to get along with.  What's more, he isn't planning on staying at home over the long weekend either.  He browbeats Charlie into going to New York City with him.  There the aged Colonel books a suite in the Waldorf Astoria and plans to have a good meal, visit his estranged brother, sleep with an expensive call girl, and then kill himself.  He just needs Charlie to help guide him through his last few days. 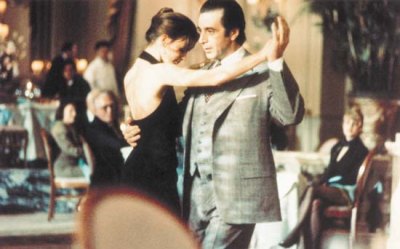 This movie of two polar opposites who learn a lot from each other is a really excellent cinema.  The difference in outlook between the main two characters couldn't be more different, but they end up arriving at the same place eventually.  The journey through New York is a series of vignettes that are all well crafted and enjoyable to watch and when they are strung together the make a hell of a film.  One of the best moments is when Slade charms an attractive woman sitting in a restaurant (Gabrielle Anwar) into dancing with him while the shy Charlie watches in amazement.  The script is really strong, and the speech at the end of the movie is one of the best monologs in film history.

Pacino won his only Academy Award for his performance in this film and it's rather ironic that it isn't his best work, though he does an excellent job.  He plays this character with gusto and really chews the scenery.  Some may complain that he's overacting and at first it does seem like that, but viewers will soon come to realize that his performance makes the Colonel real, he breaths life into the fictional person by throwing himself into the role.

Just as strong is Chris O'Donnell as the Colonel's aide.  He plays his role in an understated way, contrasting Pacino's boisterous character.  He has that deer-in-the-headlights look for most of the movie, and it's easy to sympathize with the young man.  The scene where he's physically fighting with Pacino was powerful and able to hold his own acting with Al Pacino, which is something to brag about.

This title wasn't remastered in HD for this release, but the 1.85:1 1080p VC-1 encode still looks pretty good.  The color were warm and natural looking, especially the skin tones which didn't have that over-tweaked look to them.  The image is sharp and there is plenty of detail, the opening scenes of the boarding school campus were particularly impressive.  The level of detail does vary a bit over the course of the film, but it never dips below the acceptable level.  There is a small amount of edge enhancement present is various spots through the film, but it never gets annoying.

I was disappointed to see that they didn't take the time to remove the dirt spots present on the print that they used.   There were maybe a dozen that I noticed over the movie's 2 ½ hour running time.  There was a bit of digital noise in some scenes, shots of the sky were particularly affected, but there was only a minor amount and it didn't distract.  Even with these flaws the picture was above average and very pleasing.

This film has a 5.1 DD+ soundtrack in English as well as a French dub is stereo.  The disc does a good job reproducing the sounds of the film, but this just isn't a very active soundtrack.  The movie is mainly dialog based and the voices are nearly always centered on the screen. The rears were used to good effect during the Tango scene, and there was some incidental sounds thrown to the back, but that was the exception rather than the rule.  This is a good sounding disc, there just isn't much in the mix to really impress viewers though.

It's a shame, but there are no extras at all.

Scent of a Woman is simply a great film.  It is able to make viewers relate emotionally to the characters and care about them, without ever becoming sappy, maudlin, or over-sentimental.  That's a rare feat to accomplish.  This HD DVD version of the film looks great.  It's only too bad that the soundtrack won't show off your system.  An excellent film and a good looking transfer.  This one's a winner.  Highly Recommended.