How much is in a name?  If Eastman and Laird, two comic geeks who parodied the Marvel Universe in a self-published comic book, had called it "The Turtle Squad" it is likely that no one would have ever heard of their creation.  Instead they named their creations The Teenage Mutant Ninja Turtles (TMNT) and sold out their first printing in days, largely do to the outrageously funny name.  The book was more than just a one trick pony however.  The first issue was a very cleaver parody, and as the series went on it became more serious, intricate, and even a bit dark.  The comic spawned an entire industry with cartoons, action figures, pajamas, party supplies, and just about everything else you can imagine being released with a TMNT theme.  Three live action theatrical movies were released between 1990 and 1993, and this year the Turtles once again made it to the big screen with a $35 Million CGI extravaganza, aptly titled TMNT.  With big-name cast members and a beautiful looking Blu-ray disc, it's too bad that the movie isn't better than it turned out to be. 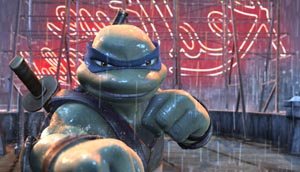 In case you've been living under a rock and haven't encountered the Ninja Turtles, they are a group of four small turtles who were covered with radioactive ooze.  This goop mutated them, increased their size and intelligence and made them stand upright.  They were trained by a mutated rat, Master Splinter, in martial arts and together the four brothers fought crime in New York.

This movie takes place a year or two after the third live-action film.  (Though the third movie, where the Turtles go back in time, is never referenced, there are souvenirs from that adventure scattered about their lair.)  Leonardo (James Arnold Taylor) has been sent to Central America to become a better leader, and while he has been away the other three Turtles have been drifting.  Donatello (Mitchell Whitfield) has taken a job doing phone tech support, Michelangelo (Mikey Kelley) dresses up as a Ninja Turtle and entertains children at parties, and Raphael (Nolan North) has taken to prowling the streets at night as a masked vigilante, dubbed Nightwatcher. 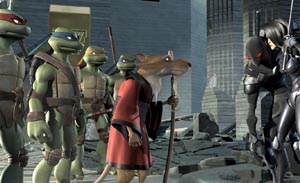 April O'Neil (Sarah Michelle Gellar) runs some sort of import business and lives with Casey Jones (Chris Evans).  She encounters Leo while looking for a giant stone statue for a client, Max Winters (Patrick Stewart) and convinces him to come back to NYC.  When he returns he finds the Foot Clan active again, giant monsters roaming the streets and a group of four stone statues brought back to life by their 3000 year old commander.  The four brother are disorganized however, and don't want to follow their leader.  Can Leo bring them back together and forge them into a lean, mean fighting force once again?

Okay, this movie sucked.  I screened it with my family, and my two sons (11 and 14) who are TMNT fans and both were unimpressed.  Comments like "That was really lame" and "I wanted them to fight a villain, not each other" were fairly common after the film was over.  There are a lot of reasons why this film doesn't even make good kiddie fodder.  The plot is unnecessarily complex and convoluted, and doesn't make much sense.  When even kids are asking "How does sending Leo to live alone in a jungle teach him leadership" you know the script is poor.  The main story, involving the immortal Max Winters has plot holes so big that it's hard to follow the movie.  When he became immortal, 3000 years ago, his for generals were turned to stone and 13 monsters released into the world that destroyed the rest of his army.  It was stated that the monsters still exist.  Where have they been for the last three millennia?  How did Max make the stone statues come to life?  Why didn't he do it 3000 years ago?  Don't even get me started on stars throwing flairs to each other whenever they line up.  Sheesh. 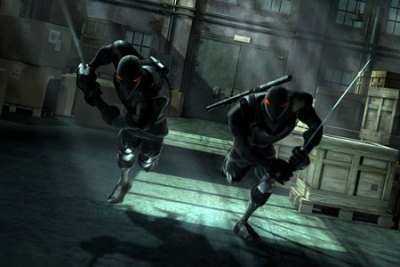 There's also a big lack of background information.  That's understandable to some extent, but since this is a continuation of the live-action series they really needed to have some more exposition than the brief into.  After all, the children that this movie is aimed at weren't even alive when the last live action movie was in theaters.

Even though the script was fairly wretched (wasn't learning to work as a team the plot of the third movie??? And why can't the turtles figure out who Nightwatcher is even though he has a turtle shell on his back!) the action scenes were a lot of fun.  The fight between Leo and Ralph on a rain soaked rooftop was the highpoint of the film.  It had all of the action, excitement, and cool fighting moves that I was hoping would fill the film.  Unfortunately the big battle at the film's end was a bit anti-climactic in comparison, though it was still pretty exciting.  It's too bad that writer/director Kevin Munroe couldn't have cut a lot of the nonsensical plot and concentrated on making an enjoyable action film instead.

Though I didn't like the film I have to admit that the Blu-ray disc looks pretty good.  Really good in fact.  The film is sharp and has excellent definition, but even more than that is the way it reproduced the texture and feel of the turtle's shells and skin.  Master Splinter also looked great, with his fur looking like a group of individual hairs rather than just a colors texture applied to his skin.  The lighting is outstanding too.  During the battle at the end when the dimensional portal is opening the whole image becomes washed out and highlights become saturated which really gives the impression that an incredibly bright light is just off screen.  The dark scenes are just as impressive with rock solid blacks and fine details still being sharp even when they are in shadows.

There was really only one problem with this disc, and that's some significant banding every time the sky was shown.  It's not subtle at all and really became distracting, especially since the rest of the disc looked so good.  Aliasing, cross colorization and block are all absent.

This disc boasts a Dolby TrueHD 5.1 audio mix that is outstanding.  It really puts the viewer right in the middle of the action.  The fights had the sounds of walls collapsing and solid impacts coming from all corners of the room.  The soundstage was used to good effect, and it was wide and open too.  The subwoofer got a good workout when a monster crashes through floor after floor of a high-rise that's being constructed, but the highs weren't ignored either.  The light sound of rain hitting the roof tops was clear and distinct and added a lot to the feel of the movie.

The thing that was so impressive about this soundtrack is that it didn't collapse into a stereo mix when the action scenes were finished.  The clanging of the stone general's iron boots on the marble floor would echo to the rears and incidental sound effects were well placed around the room, and not centered on the screen.  A top notch sounding disc.

This disc contains the same bonus material that the SD and HD DVD releases boast, which is a good thing, but there really isn't much here, which is a shame.  Another disappointment is that all of the video extras are presented in SD video.

The extras start out with a commentary track by writer /director Kevin Munroe.  It's easy to tell he's excited about doing his very first commentary track but that excitement doesn't translate over to the viewers.  He talk is fairly dry and it's hard to keep your mind from wandering as he talks about how they lighted the film and other technical details.  I was surprised to hear that a lot was cut from the film.  Maybe that was a mistake, as a little more time may have improved the way the film played.

There's also an alternate opening and ending, basically different narration on the intro and a scene with April and Casey at the conclusion that doesn't do much to change the story.  Likewise the deleted scene of Mike sneaking some food to Splinter didn't make much of an impact.  Donny's Digital Data Files was pretty interesting; a 2-minute look at how the Turtles were created inside of a computer, but the TMNT Voice Talent First Look featurette was really lame.  It had the big-name stars (Stewart, Geller and Fishburne) talking about what a great movie they made.  A fluff piece that really wasn't worth the five minutes it took to watch.

There is also a web trailer for the film, but the theatrical trailer isn't included.

I really wanted to like this movie.  While writer/director Kevin Munroe was able to strike a good balance between being too silly and too serious, the plot was too convoluted and filled with too many inconsistencies, illogical actions, and just plain stupid stuff.  No one in my family enjoyed the film, and even the kids said that they're not interested in seeing it again, something that's pretty unusual for them. While the Blu-ray disc looked and sounded great, that's not enough to make up for this poor film.  Skip it.


Note:  For a different take on this movie, see Adam Tyner's review of the HD DVD release here.  (He liked it.)