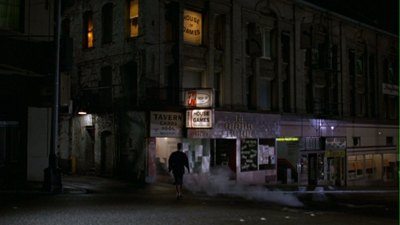 When slick con man Mike (Joe Mantegna) first meets haughty therapist Dr. Margaret Ford (Lindsay Crouse), he explains to her about how people have "tells." It's the little things a person does that gives away when he or she is lying. One of the men Mike is playing cards with (Ricky Jay), for instance, fiddles with his ring when he is bluffing in the game. Learn someone's tell, and you have the ability to predict what they are going to do next.

This is the crucial moment of David Mamet's 1987 debut, House of Games, when Margaret, whose specialty is studying compulsions and obsessions, decides to cross a line and observe criminal wildlife in its natural habitat. It's also the closest House of Games gets to having a tell of its own. Because if there is one thing that this snappy, dramatic crime flick doesn't do, it's telegraph to the viewer where it's going to go next. Mamet's ability to keep his cards to himself is what sets his movie above the average grifter picture.

We've had a lot of pretty okay con men movies in recent years, things like Matchstick Men and Confidence. While these films were decent enough the first time around, they fail the test of time because they are too hung up on their own need to try to trick the audience into falling for their narrative schemes. Watching them, you know that double-crosses are coming, and when it comes down to it, that's all those movies have. This means the watcher spends the entirety of the picture thinking ahead, guessing who is ultimately screwing whom. Once the magician has explained how he did it, his act ceases to be interesting.

Not so in House of Games. Mamet understands that in order to instigate a true cinematic sleight of hand, he has to look his audience dead in the eyes and give them something to watch. In House of Games, it's the tango Mike pulls Margaret into. The seduction of the criminal underworld is the true seduction of the movie, and we follow the good doctor into the back rooms and peek behind the curtain with her. There may be twists aplenty ahead of us, but we're too busy enjoying the polished dialogue and the charismatic performance of Joe Mantegna to ever glance at the map. This car is going straight ahead, and we'll take the curves as they come.

As a first time director, Mamet shows an assured hand. The script is based on a story he wrote with Jonathan Katz, best known for his Dr. Katz TV show. Presumably, though not a therapist himself, Katz provided a lot of the psychology and Mamet produced the marked cards. Though he may be able to guard the secrets of his narrative, the tell-tale signs of the Mamet style are already in evidence even as far back as 1987. It's kind of funny, because for other first-time directors, the arch tone and the stiff-necked camera movements would suggest a lack of confidence, but for Mamet they are the first signs of some of his best assets.

House of Games - Criterion Edition is a DVD I could watch over and over, even after knowing how Mamet creates his grand illusion. The script doesn't rely on cheap tricks, and his characters aren't straw men propped up to serve a function. Rather, it's an honest to goodness crime story with an underlying psychology that only makes the film get better the more you understand it. As a viewer, I am Mamet's willing patsy, and I'll let him take me for a ride whenever he feels like it. 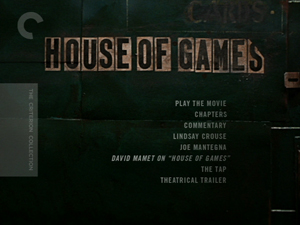 Criterion pulled in director of photography Juan Ruiz Anchia to supervise the new 1.78:1 widescreen transfer of House of Games. Set mostly at night, the film has the natural look of a cold city street, but also the slightly unreal glow of neon bar signs. As Margaret muses in the film, it requires dark places to do dark business, and this impeccable transfer makes sure we can see that dark business without losing any of the intended mood.

The mono soundtrack also has nice atmosphere, even if it doesn't take full advantage of the advances in audio the film industry has made in the two decades since House of Games was first released. There is a directness to the mix that works really well in favor of the dialogue-heavy script.

Of the many extras here, Mamet fans are probably going to be most excited about the commentary track with Mamet and Ricky Jay. Your enthusiasm is well-placed, as this is one of the best director's commentaries I've ever heard. The two talk about the movie in general while also breaking down the mechanics of confidence games, comparing grifting to psychology, religion, and storytelling. Mamet also lets his bitterness at the studio's mistreatment of House of Games show in all its righteousness. Stick around to the very end to hear Jay laughing over the roaring lion of MGM. It's worth it.

Two new video interviews from the main actors, Lindsay Crouse (14 minutes, 50 seconds) and Joe Mantegna (14:45), compound this bounty of information. Both have great perspective on House of Games and let us in on their experience on the picture and their interpretation of their characters, as well as collaborating with Mamet.

David Mamet on "House of Games" is a twenty-five minute documentary shot and put together by the producer and his wife to promote the film. It features rehearsal footage, on-set material, and even some shots of David Mamet playing poker with his buddies. The writer/director also talks at length about his intention with House of Games and his early impressions of the movie industry.

One famous anecdote about House of Games is that the original script shows the con men teaching Dr. Ford a very real method for scoring quick cash, and Ricky Jay offered to invent a new con rather than expose a real scam that friends of his might use. This invented element is the bit with the $20 bill and the envelope. Well, the first version got far enough to be storyboarded, and with Jay's permission, that storyboard is available here for the first time.

The original theatrical trailer is also a bit of a curiosity. Not only is Mamet one of its major selling points, which is a pretty rare technique for a movie studio to take, but the whole of the trailer gives a lot of the plot away. You even see a crucial moment from the last scene!

As is to be expected, Criterion gives the consumer a thick supplemental booklet to go with the movie. The twenty-eight-page insert has stills from the film, an essay by Film Comment editor Kent Jones, and a reprint of Mamet's ruminations as a first-time director that first appeared as an intro to the published screenplay.

House of Games - Criterion Collection is Highly Recommended. David Mamet's debut movie is an expertly constructed psychological scam, pitting two types of brains against one another while suggesting that both have criminal leanings even if one is seen as more legitimate than the other. Joe Mantegna is charismatic and assured, and the script is tightly trimmed to give the viewer no time to pause, lest the whole structure unravel. Once the movie is done, the quality bonus features only add to the overall understanding--and enjoyment--of the picture. This is a value for the money purchase, no question. 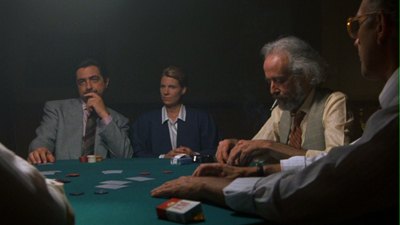