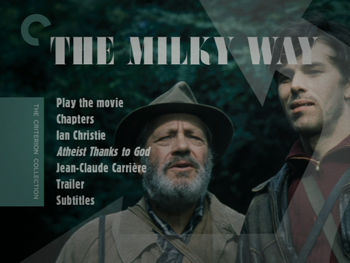 I'm not easily impressed when it comes to art that sets out to question and/or challenge religion. I think it's easy to be shocking when trading in other people's beliefs. Blasphemy is cheap to come by. It's much more difficult, and far trickier, to be genuinely provocative, to debate without being smug or crass. Surrealist filmmaker Luis Bunuel has always been just such a provocateur, regardless of his subject. Though religion is a commonplace theme in his work, it's not the only target he's trained his impish eye on. It is, however, the primary subject of his 1969 film The Milky Way (La Voie lactee), which is now available on DVD from the Criterion collection.

The Milky Way concerns itself with two modern pilgrims, old Peter (Paul Frankeur) and young John (Laurent Terzieff), two French beggars (so, also known as Pierre and Jean) making a trek to Spain to visit the blessed city of Santiago de Compostela. As the opening exposition tells us, this is the resting place of St. James, and its name has several entomological meanings, one of which is "The Milky Way." It's a perfect highway for the director to put his story on. The Milky Way is also the name for our galaxy, and so then The Milky Way is about all of us, the whole of humanity.

Peter and John, presumably named for two of Jesus' top disciples, are a pair straight out of Beckett, as is the road they walk. They are in a world where God is always present, but his level of activity is in question. As pilgrims, they follow a route that many have before them, but it's now a paved roadway. Cars speed by, bad Samaritans who refuse to stop and give them a lift. If any of the speeders encountered God on their travels, would they even know? In fact, it's arguable that the man in the cape (Alain Cuny) that Peter and John meet at the very beginning of the film could be the Divine Father (thus explaining the sudden appearance of a younger, smaller traveler next to him). He offers the two hobos money, but only if they already have cash in their pockets. Skeptical John says he has none, and so the man in the cape tells him he will remain poor, whereas when Peter produces a couple of coins, the man gives him a banknote.

What Bunuel seems to be suggesting is that religion only serves those who show up with faith already, turning a blind eye to the sufferers who lack the intrinsic belief. It's a contradiction if one believes the central message of Jesus Christ was to save humanity from its own sins, and only the first of many contradictions Bunuel extracts from religious dogma by standing it next to flesh-and-blood action. He also does so in a darkly comic tone. These things may be heavy, but there is an inherent silliness to them.

As the pilgrim duo travels on, they encounter person after person who is somehow concerned with the living, breathing enacting of Christian philosophy. Structurally, it's a gentle elbow into Chaucer's ribs. The people they meet are of all types--the sincere and the crazy, the duped and the hypocritical--and every story (or parable, if you will) has double meanings. Bunuel rarely seems to be questioning the common believer so much as he is challenging those in authority and the dubious logic they often use to justify their right to rule. So hot is the debate over which sect of the Christian faith has the real truth, we even see one priest digging up the decayed corpse of another so that he can burn him as a heretic after the fact, thanks to some newly discovered personal papers that go against his previous public statements. One must not split from the one truth, even if the argument is ironically about whether God is one being or a holy trinity.

In addition to Chaucer and Beckett, The Milky Way also caused me to think of Monty Python. The transitions are remarkably similar to the comedy show, and there is the same sense of play shared between them. Peter relating a story about a lesson his mother taught him cuts to Jesus (Bernard Verley) and Mary (Edith Scob) in a skit where they have the same interaction as stand-ins for Peter and his mom. All along the road to Compostela, time is immaterial, past and present collide. Cars share the highway with men and their donkeys, and Peter and John often step into costume dramas of various periods from religious history. Likewise, we often see the opposition as just as foolish and unbending as the religious leaders. In one sketch, the Marquis de Sade (Michel Piccoli) is no less self-serving and strident than any puffed-up Pope. Bunuel understands that organized religion brings out the worst in its detractors, too.

Which could be why the director and his co-screenwriter, Jean-Claude Carriere, are so careful to inform us at the end that they have meticulously researched all the arguments they have strung together for The Milky Way, quoting theology and supposed heresy directly wherever required. A lot of the arguments are probably familiar to anyone who has done any religious study, but seeing them within one overriding context serves to emphasize the enormity of the question. Our inability to agree, and our willingness to resort to heinous violence in service of our own need to be right, is more absurd than any of the notions being fought over.

Perhaps what I like best about The Milky Way, though, is that I don't feel that Bunuel has come down too hard with his own ideas. The way he contextualizes all of these arguments, and choosing to air so many theories that had been branded "heresy," is its own commentary, to be sure, but I don't feel like he gives any great weight to any one over another. In fact, the only thing I find he really seems to be push as a truism is the inevitability of where our lives are headed. When Peter and John meet the man in the cape, he foretells where they will end up, and though the two argue over the concept of free will on the way to what is ultimately an empty tomb (or so we're told, and we'd be missing the point to believe it outright), fate plays its hand before they get there. So, too, is the final image of Jesus declaring himself a scourge upon mankind, a conceited deity only concerned with his own worship. If there is anything we know for sure when it comes to faith, it's that human nature will override, and man will ultimately use it for his own selfish designs.

For as funny as The Milky Way is, for as gleeful as Bunuel can be with his visual pranks, it's a chilling way to end the movie. The jester and the filmmaker lose out to the cynic.

That is, if we can separate the three. They may just be one and the same. 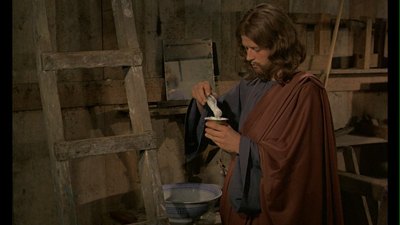 Video:
The new transfer for The Milky Way - Criterion Collection is shown at a 1.66:1 widescreen aspect ratio. It's a pristine job, with nice colors and no surface noise or other problems whatsoever. Bravo!

Sound:
The original French soundtrack is presented here in a mono mix with well done and easy to read English subtitles.

Extras:
Noted film theorist Ian Christie talks at length (just over twenty-eight minutes) about the movie, including talking about the climate the film was released in, some of the cinematic and religious influences on The Milky Way, and decoding some of the more difficult elements of the picture. Next to that is a new video introduction by co-screenwriter Jean-Claude Carriere. Just under six minutes, it was recorded in 2000, and we've seen pieces of the same interview on other Bunuel discs from Criterion. This portion is specifically about the genesis of The Milky Way.

Carriere is also in the documentary Luis Bunuel: Atheist Thanks to God, a thirty-two minute rumination on Bunuel and The Milky Way, featuring colleagues and actors, as well as a Catholic priest who can look past the strictures of his own vocation to see the value in Bunuel's exploration.

The original theatrical trailer rounds out the release. Playing on the movie's duality, it pretty well sets the tone for the confusion that may result on first viewing of The Milky Way.

Finally, we get a 36-page booklet featuring photos, essays by novelist Carlos Fuentes and critic Mark Polizzotti, and an old interview with Bunuel himself.

FINAL THOUGHTS:
The Milky Way - Criterion Collection is a wryly provocative history of heresy and conflicting beliefs in the Christian faith. Stringing his philosophy over a thin, winnowing plot that is often like sketch comedy in its construction, master surrealist Luis Bunuel creates a strangely intriguing story that shows two religious pilgrims traveling toward a holy site, bound neither by time nor space, nor the dogma of any one particular view of the God who compels them. Challenging, mystifying, and often very funny, The Milky Way is a hallmark for the cinema of ideas. It's not for everyone, but I still think everyone should see it. Highly Recommended. 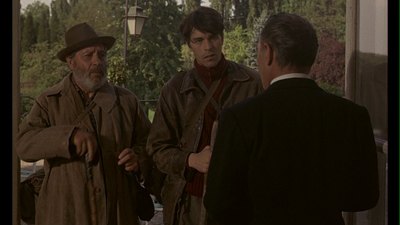