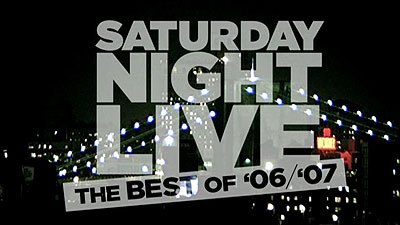 
The Show
31 years after it first aired, we finally managed to get a complete collection of the first season of "Saturday Night Live." It took considerably less time (about 3 months) to get a best-of collection from the 32nd season. Despite the many, many differences between the seasons, eras, casts, and DVDs, there's at least one common denominator: both are severely disappointing. Whereas the first season DVDs of SNL was a complete collection of a mediocre show with some highlights, the 32nd season DVD is a few bits and pieces from a mediocre show with some highlights. And only one of them features more Andy Samburg than a Samburg Family photo album.

Though many people subscribe to the very hip opinion that "SNL" is an overrated wasteland where bad movie concepts are born, the show's embracing of YouTube-style presentation through its Digital Shorts, made famous by the aforementioned Mr. Samburg and his "Lazy Sunday" video with Chris Parnell, has actually made some people view "SNL" as something actually funny. Unfortunately, the shorts make up a small percentage of the show's actually content. But then again, there are Robert Smigel's fantastic "TV Funhouse" cartoons and the still quite-impressive musical guests. But then again, this DVD features NONE OF THEM. Not a single lick by Snow Patrol, not one angry scream by Linkin Park, not a silly song by Tenacious D. You can't revel in the twisted Dora the Explorer parody "Maraka," remember when with the 2007 year in review or giggle like a Japanese schoolgirl at "Kobayashi." Oh well.

At least there were great guest hosts like Rainn Wilson, Scarlett Johansen, Drew Barrymore and John C. Reilly...except they weren't included on this disc. Which means we don't get the great "The Office" monologue. We also didn't get the hilarious Borat cold open. Want to check out appearances by the show's alumni like Will Ferrell, Chris Rock, Molly Shannon and Jimmy Fallon (reprising the Barry Gibb talk show with Justin Timberlake)? Sorry, here's some Julia Louis-Dreyfus in your eye. 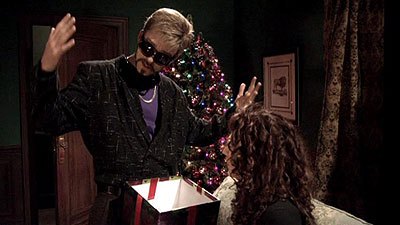 So what DO you get? Besides lots of Samburg (in 7 of the 18 sketches), you do get some pretty good sketches, like "The Tony Bennett Show." Alec Baldwin is perfect as the cool-cat crooner, which is obvious when he's joined by the man himself, who's obviously having a good time with the gag. There's also a pair of fun bits by football star Peyton Manning, who breaks the "SNL" stereotype of the bad athlete/actor, a montage of the best Weekend Update bits (with Amy Poehler and Seth Myers reminding us what a crappy year it was/has been) and the viral musical short "Dick in a Box." Beyond that, there are a few bits with a couple of laughs, like Amy Poehler & Maya Rudolph's "Bronx Beat" with Jake Gyllenhaal, Dane Cook's silly "Airport Security" sketch, Jeremy Piven with "The A-Holes," Hugh Laurie's "Most Haunted" parody and Samburg with Ludicris in "Blizzard Man" (a surprisingly fun bit.)

But right in the middle of these sketches is a four-pack of lame, starting with "Deep House Dish," yet another of "SNL"'s talk show sketches, this one hosted by Keenan Thompson as DJ Dynasty Handbag and his retarded co-host T'Shayne (Samberg) and making fun of house music via Thompson's swishy host and a few musical guests played by Rudolph, Poehler and Matthew Fox. Two things would have helped this, more Rudolph and Poehler and a time machine set to the '90s. What didn't help were the three sketches that followed, a weak sight gag sketch with Louis-Dreyfus, a questionably-humorous quickie with Rudolph and an unneeded Donald Trump/Rosie O'Donnell feud sketch with Darrell Hammond.

If this really was the best of "SNL" and was just simply weak, it would be somewhat acceptable, but there are plenty of sketches that were left out that were simply better than many of these scenes. The coffee/apple cider sketches with Jamie Pressly and Manning were surreal fun, as were the Kristen Wiig "Michelle Dison" horny reporter sketches. Instead of watching "Deep House Dish" they could have thrown in the Gyllenhaal episode of "The Prince Show" or one of the odd "Dakota Fanning Show" sketches. And not including any of the Noony/Noonie sketches, no matter what trainwrecks they may be, is uncalled for.

Depending on your view of the series, you'll either be surprised by the quality of the good sketches or disappointed by the inclusion of the weaker segments, but either way, the collection is uneven. One can't help but think that perhaps the inclusion of just a few of Smigel's cartoons or perhaps a wider array of sketches would have helped. At least we only have a couple of decades to wait to find out. 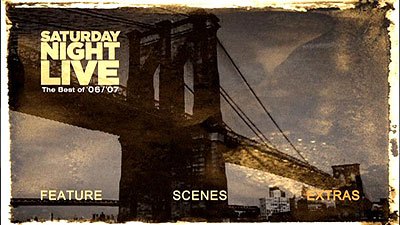 The DVD
Available exclusively through Starbucks in the U.S., this one-disc release comes in a one-tray, three-panel digipack that's nicely designed, with host and airdate info for the 11 episodes represented on the disc. The disc features an animated, anamorphic widescreen menu, with options to play the show, select scenes and check out extras. There are no audio options and no subtitles, though there is closed captioning.

The Quality
I believe this is the first "SNL" DVD released in anamorphic widescreen, and it looks great for it. The image is a slight step beneath what it looked like when it aired in high-definition, but the colors are great, the level of fine detail is very high, and there's no noticeable digital artifacts in the transfer, nor any dirt or damage. It's going to be hard to go back tot he standard "SNL" releases after this.

The audio is presented as a Dolby Digital 5.1 track that's nice and clear, but doesn't feature any dynamic mixing or impressive effect. It's just plain good audio, which is what you'd expect from a network sketch comedy series.

The Extras
The biggest extra is an audio commentary with several of the actors and writers, including Poehler, Rudolph, Myers, Samburg, Will Forte and others. While some of the performers chat together, they only discuss their own sketches, with the whole piece edited together from a number of separate recordings. There are some slow spots, and a couple of gag commentary segments, when no one from a sketch is available, but it's entertaining overall, though you won't learn a lot.

Two dress rehearsal sketches, which didn't make it to air, are included here, seen for the first time. One, a Virginica sketch with Thompson and Manning, is pretty bad, while the other, a Justin Timberlake scene that takes advantage of his musical skills, should have made it into his episode. There's also a montage of dress rehearsal jokes from Weekend Update that's pretty hilarious, as Poehler and Myers riff and goof around. Also found on the disc is the uncensored "Dick in a Box" (for swear fans) and a photo gallery.

The final extra is an extra "30 Rock" disc, which is a nice promotional tie-in featuring the episode "Black Tie," one of the series' funniest to date, co-starring Paul Reubens as a bizarre foreign prince. If you haven't been watching this show, this is a nice way to get into it, though the transfer is not widescreen. A couple of extra extras are included as well, as 3:30 of deleted scenes are joined by a featurette overview of Liz Lemon (Tina Fey) and her dating misadventures in Season One. 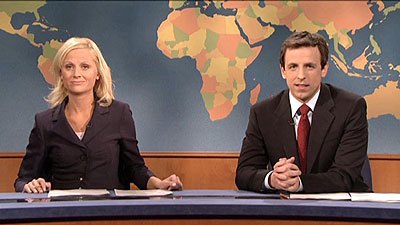 The Bottom Line
If you think about it, this disc says that the cast and crew of "Saturday Night Live" managed to put together less than 90 minutes of quality comedy over the span of a season, as this best-of collection has a couple of clunkers in it (just say to yourself "Imagine what they left out?!" and chortle.) On the other hand, maybe the producers just didn't pick the right material. It just seems odd that out of 19 episodes, only 11 are represented in this collection, when a time-filler like "Deep House Dish" or "Trump Press Conference" somehow slipped into the realm of "best of." Either way, it's also amazing that there actually are some great sketches here, considering how some people view the show as just funnier than breast cancer. The DVD looks and sounds as good as you can expect for live network TV, and the few extras are a nice addition to the main feature. As it could be 30 or so years until we get a complete collection from this season, which would allow you to watch your favorite episodes or sketches, this will have to do for now. It's not a great consolation, but when it comes to "SNL" fans, expectations are hardly high.