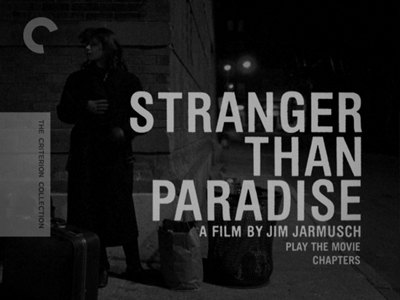 Though I hate when reviewers trot out the old cliché "people either love it or they hate it" in order to describe a film, I can't avoid a variation on that to talk about Jim Jarmusch. I think you're either a Jarmusch guy or you're not. His films vibrate to their own particular pitch, and it's one you're either tuned to or you're going to be hopelessly perplexed by his laconic appeal.

Perhaps none are more perplexing to the non-Jarmusch folks than his second film, 1984's Stranger Than Paradise, which is being re-released by the Criterion Collection as a two-disc special edition. Shot in black-and-white on a shoestring, it's got all the watermarks of a Jarmusch production, the sort of career defining solidification of style that signals the emergence of a true auteur.

New York layabout Willie (John Lurie) receives a phone call from a distant aunt that tells him his Hungarian cousin, Eva (Eszter Balint), is flying in from Budapest that very day and Willie is going to have to babysit her for the next ten days. He is annoyed by this sudden change of events, as a girl hanging around is going to disrupt his days of card playing, horse betting, and eating TV dinners. At first he is rude to her, and she is no less rude to him, but by the time her stay is over, they've warmed to one another.

Flash forward to a year later. Willie and his sweetly dumb partner Eddie (Richard Edson) hustle up some cash and decide to take a road trip. Still thinking about Eva, Willie suggests they swing down to Cleveland to see her. After a few malaise-laden days at the aunt's house, the three then drive down to Florida, where the tenuous connection they've built on ennui starts to break down. The undulating wave of happenstance and luck that they've been riding shakes them all off, even as it refills their pockets, in order to show them they've never truly connected. The trio of pals all careen off in different directions. The harder Willie tries to keep it together, even, the more wrong it goes. The conclusion of Stranger Than Paradise is bittersweet, but also right on.

Jim Jarmusch definitely studied at the feet of John Cassavetes. Both are poets of the normal, choosing to try to capture life as it plays out. Whereas Cassavetes was fascinated by people who were reaching their breaking points, however, Jarmusch is more concerned with people who are in the thick of the mundane details that make up most people's existences (as well as the odd details that could only come from New York). In his Paradise, it's the lack of anything to do that causes all of these details to push against his plaers, that dislodges them from their comfortable seat. The lack of any great catalyst provides the frustration. It's the drama of inner turmoil, lacking in violence or histrionics.

John Lurie is essentially the star of the picture, and it wouldn't be the only time he would collaborate with Jarmusch. Lurie is, in some ways, what Elaine Benes (you know, from Seinfeld) called a "hipster doofus." He dresses in a kind of jazz-age street style, but he seems blind to the fullness of what he borrows from, dissing Eva for listening to Screaming Jay Hawkins despite looking like he robbed a lounge lizard for his shoes (and even succumbs to Eva's spell via Jay's incantation). He embodies the nervous energy that is the battery giving life to Stranger Than Paradise, often shuffling back and forth on his feet, unable to sit down, and yet having nowhere to go. If Jarmusch is sending Willie and the others on a quest to find Paradise, the mean joke of it is that wherever these guys go, there they are (another cliché). Meaning, either their own personality quirks are the main sticking point barring them from passing through the Pearly Gates (they are, indeed, too strange) or that Paradise is wherever they find themselves. A sense of self and the willingness to be a part of a community is all they really need.

Tom DiCillo's chilly black-and-white photography not only captures the cool in the climate, but of Jarmusch's arch sense of being. Coolness is the ineffable ingredient to a Jim Jarmusch picture. There is a scene in Sofia Coppola's adaptation of The Virgin Suicides where Josh Hartnett's character first steps through the high school doors, strutting to Heart's heavy guitar riffs, and everything slows down for him, the boys and the girls and time itself. That's the moment Jarmusch's films occupy from the first frame to the last. There is something out of time, something that stands apart, in everything he does. Stranger Than Paradise is the first full-blown expression of this, paving the way for all that is to come. More than two decades later, it still has the right kind of vibrations, still requires the viewer to be in tune with it rather than tuning in to the viewer's wavelength. It's art that's not afraid to be true to its nature, much like the Jarmusch heroes it portrays.

Video:
Stranger Than Paradise - Criterion Collection has an all-new widescreen transfer, supervised by Jim Jarmusch, and presented at a 1.78:1 aspect ratio. They did a super job cleaning up the image, improving vastly on the decent but imperfect DVD that MGM released back in 2000. Any scratches or dirt are gone, and the sharpness of the image has been ratcheted up. The values in the black-and-white picture are really strong, with subtleties to the grays and deep blacks. This is as good as it gets.

Below you will find comparison shots of the two DVDs. Note that the old picture (on top) is more grainy and darker, and the Criterion disc (bottom) is clean and clear. 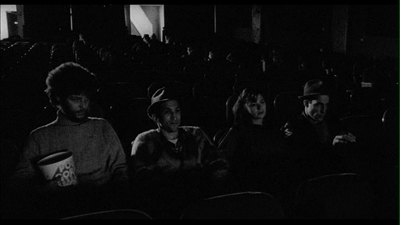 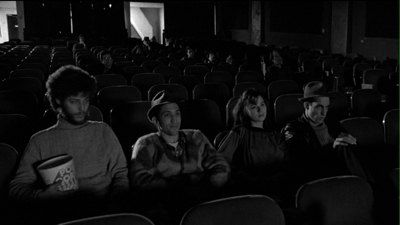 Sound:
Criterion sticks with a mono soundtrack, which likely preserves the atmosphere of the original sound mix. There is a nice interplay between the dialogue and the surrounding noise of the environments that comes through really well in this context.

Both Stranger Than Paradise and the bonus film Permanent Vaction have the option of English subtitles.

Extras:
This two-disc edition of Stranger Than Paradise has the movie on the first disc with no extras. The second DVD, however, has many.

The main bonus is Jim Jarmusch's 1980 debut, Permanent Vacation, which was never widely available in the U.S. prior to this release. In it, Jarmusch brings his molasses pace to cinema verite, creating an episodic wandering through a surreal version of New York. Led by Charlie Parker-enthusiast Aloysius "Allie" Parker (the pompadoured Christopher Parker), we go from one strange character to another, each fighting his or her own private war with the demons within, manifesting without as the bombed-out rubble that these visionaries see as a sign of the conflict and a few (including Allie's girlfriend, Leila Gastil) see as just the normal state of decay.

Allie states his intentions twice early on. First, in a bit of graffiti, he declares "Allie Total Blam Blam!" Second, in his framing voiceover he declares his love for the saxophonist Charlie Parker. This signals his desire to obliterate the image of himself that currently exists and his openness to improvisation, taking life as it comes. Allie also explains the world he moves through, saying that he only dreams when awake, coloring everything he sees. Other clues are dropped by the strangers he meets, pointing to change. When a man in a movie theatre (Frankie Faison) explains to him about the Doppler Effect, the scientific law that says sound changes based on our proximity to it, this is then acted out by the saxophone-playing John Lurie. Allie's mission requires movement, chance, and an alertness to what he is witnessing.

Permanent Vacation is fascinating as a bold experiment taken on by a young filmmaker, but it's a little slow, maybe a tad too loose. Still, it's essential to the understanding of Jarmusch's development as an artist and a solid companion for Stranger Than Paradise. The presentation is full frame, with a clear picture that has a slight graininess that is likely just the nature of the production. 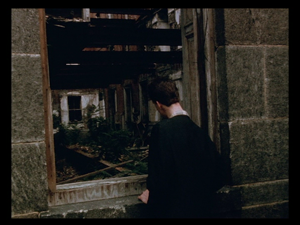 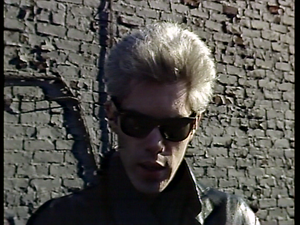 The rest of the extras are more specific to the main feature. The most substantial is Kino '84: Jim Jarmusch, a German program celebrating the success of Stranger and the arrival of Jarmusch as a cinematic voice. The director and his colleagues are interviewed, including DiCillo, Parker, and the cast of Stranger Than Paradise. The program is structured like a Jarmusch film, as the director leads us through New York City, showing us the places he visited while making the movies and the people he knows there. The whole show runs just under 45-minutes and is entirely in English.

A gallery of photos taken as location scouting for Stranger Than Paradise goes well with a 14-and-a-half minute silent film shot on Super 8 by Tom Jarmusch, Jim's brother. Titled Some Days in January 1984, this is the short film that was the sole extra on the MGM release of the movie, so if you're wondering whether you need to hang on to the earlier disc to save the short featurette, fear not, you can dump it.

Finally, there are both original U.S. and Japanese theatrical trailers.

As per usual, Criterion rounds out the release with an excellent supplemental booklet featuring photos and essays by Geoff Andrew, J. Hoberman, Luc Sante, and Jim Jarmusch himself.

FINAL THOUGHTS:
I'm a big Jim Jarmusch fan, and so the Stranger Than Paradise - Criterion Collection couldn't be anything but Highly Recommended. Yes, I'm biased, but it's a pretty killer package, with a great new print, Jarmusch's earlier film Permanent Vacation, and an extensive documentary from when the movie was released in 1984. Only his second film, Jarmusch displays the quiet cool that would define his work in his story of three misfits whose boredom sends them chasing after something more substantial, all the while missing that what is probably their greatest asset is that they have each other. It's a story of modern ennui, and how though we may want to reach out for the hand of our fellow man, we often miss his grasp, blinded by our own restlessness and insecurities. Stranger Than Paradise is a benchmark in independent American cinema, and this new DVD is an essential upgrade. 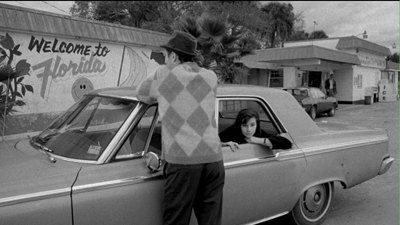