Poet James Dickey's first novel, Deliverance, was a best seller that catapulted the writer to fame. When film maker John Boorman acquired the rights (beating out Sam Peckinpah who also wanted to make a movie based on the book) he hired Dickey to adapt it for a film. The movie kept the title from the novel and though it was made on a shoe-string budget it went on to critical and popular acclaim and was nominated for three academy awards including Best Picture and Best Director. This simple story of four buddies on a weekend canoe trip that goes horribly wrong is still as powerful and unforgettable today as it was 35 years ago when it was first released. The Blu-ray presentation, while not outstanding, is good and does this impressive film justice. 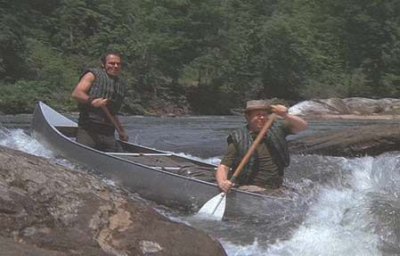 Four men from Atlanta, would-be outdoorsman Lewis Medlock (Burt Reynolds), successful but bored Ed Gentry (Jon Voight), insurance salesman Bobby Trippe (Ned Beatty), and happy-go-lucky Drew Ballinger (Ronny Cox), take off one weekend to go canoeing down the Cahulawassee River that snakes through a remote part of Georgia. A dam is being constructed across the river and the area that they are traveling down will soon be turned into a giant lake, ruining one of the few untrampled parts of the state.

Traveling through the back country the group encounters some in-bred hillbillies and hires a pair of them to take their cars down to the town of Aintry, their eventual destination. The river trip starts out wonderfully, with the two canoes shooting some rapids and Lewis bow-hunting to keep the group fed. On the second day however the canoes become separated for a moment. Ed and Bobby pull over to the shore to wait for their friends and while their waiting a pair of mountain men capture them and rape Bobby. It's just about to be Ed's turn when Lewis turns up and kills one of the attackers with his bow, and the other one runs off. 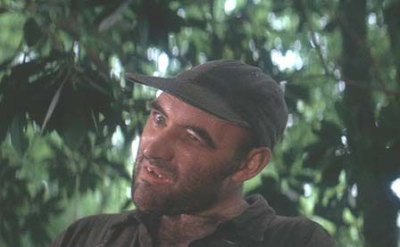 Not wanting to risk being tried for murder the group decides, with Drew sharply opposed to the idea, to bury the body and continue on as if nothing happened. They try to put as much distance between themselves and the burial site as they can, but at the next rapids Drew suddenly falls overboard, both canoes capsize, and Lewis badly fractures his leg. No one is sure what happened to Drew, though Lewis is sure that the other mountain man has shot him. Now with few supplies, a wounded member and another one missing, the weekend expedition that was supposed to deliver them from the cares of their daily lives suddenly turns into a desperate bid for survival.

This is one of those movies that will stay with you for days afterwards. Not because it's such a powerful story, but because it makes viewers question what they would do in a similar situation. The story is filled with areas of grey that make it hard to condone or condemn the actions of the characters. If you were an outsider, would you trust a jury or the justice system in a backwoods Georgia court?

Boorman does a wonderful job telling this tale in a visual way, and doesn't rely on a lot of dialog to propel the narrative. That's one of the movie's great strengths and why it 'feels' so real. No one ever stops and recaps what has happened or asks any obvious (or stupid) questions. The way the characters are feeling and what they are thinking is told through their actions and expressions. This is a bunch of guys out in the wilderness and no one ever stops to talk about their feelings. 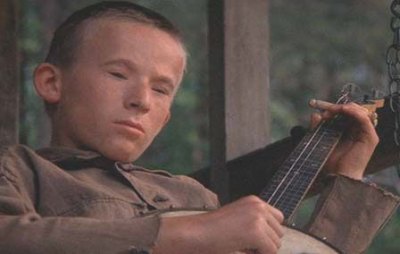 This film can be taken at face value as an above average suspense/survival tale, but there's a lot of symbolism and metaphors to dig into if you're so inclined. Occasionally this gets a tad heavy handed like when Ed, while climbing a cliff to see if a sniper is above them, takes out his wallet to see a picture of his wife and kids. Soon after he does this the wind rips the wallet out of his hand and tosses it away for ever. It's clear that he's mentally somewhere different at that moment, he's no longer the business man that he is back at home in Atlanta. That guy would never contemplate killing someone, but then again what has happened to these four men would never happen in Atlanta either. The river is also a great metaphor, propelling the men to shed the veneer of civilization that they hold so dearly, something that they'll have to do to survive.

All four of the star actors did a wonderful job on this film. Instead of just reading their lines, they made their characters well rounded real people. The way they deliver each bit of dialog reveals a little more about their character and why the do the things that they do. It's interesting to note that the actors did just about all of their own stunts too (Burt Reynolds even broke his tail bone) which again gives the film a touch of realism. Riveting performances all around.

Director John Boorman intentionally gave this film a soft look, and this 2.4:1 presentation reproduces that accurately. Because of that, don't expect to be wowed by the high def presentation. The movie looks good, but it doesn't jump off the screen like the best HD material does. The dark scenes suffer a bit from lack of detail, especially in the shadows, but the daylight scenes are very colorful and look wonderful. The greens of the trees and vegetation are beautiful and I was happy to notice that they haven't artificially boosted the colors.

The print used for the transfer wasn't perfect but it was very clean and there wasn't any damage evident. There was a fair amount of grain in a few scenes but this was the way the movie was filmed and it was never distracting.

Filmed in 1972, the movie was released with a mono soundtrack. (Note: Reader William G. informs me that a stereo 35mm version was available from Warner Brothers (as well as a 70mm blow up print.) I would assume that the stereo version was not screened very widely.) This disc comes with a 5.1 DD mix that was created from the original elements, but there's only so much that can be done and the movie reveals its mono origins fairly blatantly. Though some sound effects are thrown to the rears, the dialog mainly stays centered on the screen and the soundtrack doesn't envelop the listener like the best surround tracks do. While the bass has been punched up a lot, especially during the explosion at the very beginning of the film and when they shoot the rapids, the range is naturally limited. The dialog seems a bit muffled at times but that's fairly rare and overall the movie sounds pretty good.

When Deliverance was first released on DVD it was given the bare bones treatment, much to this reviewer's chagrin. Happily this Blu-ray release has a good number of extras, just what the movie deserves. All of the extras from the 35th anniversary SD DVD, which was released at the same time, are included and though there are no Blu-ray exclusive bonuses this is a nice package. First off is a commentary by directory John Boorman. There are long gaps in the commentary and he does describe the action on screen a little too much, but this was a very entertaining and interesting commentary track. Boorman discusses the different actors and their differing styles, talks a good deal about the composition of the various scenes, and also has a lot to say about the symbolism in the film. A commentary track that's worth listening to.

If a featurette on a DVD (or Blu-ray disc) runs more than 30 minutes, the producers are required to pay the participants. To get around that rule this disc, and many others, breaks up a long extra into smaller parts. The 35th Anniversary Retrospective on this disc run about an hour in length, but has been chopped up into four parts to save money. This is a fairly complete look at the film, starting with the book, the casting, and progressing on to the filming of the movie. They take time to examine some of the memorable scenes including the attack by the side of the river. I really enjoyed this look back. It was well done and thorough.

The extras wrap up with a vintage ten-minute promotional film The Dangerous World of Deliverance which last around 10 minutes and a theatrical trailer for the film.

A claustrophobic, uncompromising, and suspenseful film, Deliverance is a movie that you won't soon forget. This tale of four men traveling down a river does a magnificent job of drawing the viewer into the character's predicament. A story that examines the grey areas in life that most of us can comfortably ignore, it will leave you with a lot to contemplate. The Blu-ray release looks very good, better than the original SD DVD release for sure, though the film was shot in a manner that makes the image fairly soft. The newly created 5.1 audio (from the original mono mix) wasn't anything to write home about, though the bonus material is outstanding. A true classic film, make sure you check this one out. Highly Recommended.