Back To School - Extra-Curricular Edition 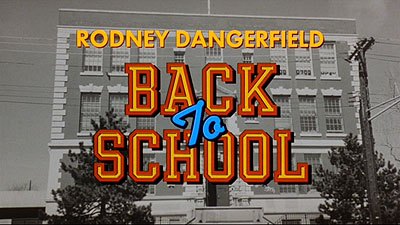 
The Story So Far...
Back to School was released by MGM on DVD in 2000. DVDTalk has a review here.

The Movie
When I was younger, my vision of what college would be like was shaped mainly by three films: Revenge of the Nerds, Real Genius and Back to School (with Hamburger: The Movie representing the college fantasy.) Whether it's good or bad that my expectations weren't met, I am certainly poorer for having never had Thornton Melon (Rodney Dangerfield) in any of my classes, and I certainly never went to a party where Oingo Bongo was playing. Thankfully, this film helps to fill that aching void inside of me.

Taking the late, great Dangerfield's one-liner-focused act and working it into the framework of a feature film couldn't have been an easy task, as anyone whose watched the majority of the stand-up-based sitcoms of the '90s could tell you. So it was a smart move to basically have Dangerfield play himself, only as a successful business man. Thus, all his famous family problems and issues with respect are fully intact, but instead of being shoehorned in, it's natural to his character to make those complaints. Add in Adrienne Barbeau as a shrew of a wife, and Burt Young as his bodyguard/driver, and you've got a perfect situation for someone who gets no respect. 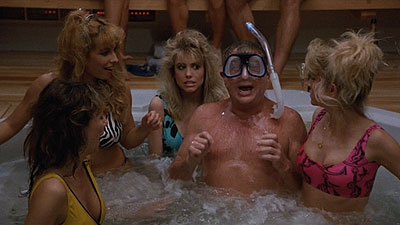 Having built an empire of "Tall & Fat" stores, Thornton should be a happy man, but he's definitely not, and neither is his son Jason (Keith Gordon), as he learns when he visits Great Lakes University on a whim. In one of those plots that only happens in movies, Jason wants to drop out of college, but is convinced to stay when Dad chooses to enroll, finally fulfilling his own father's wishes for him to go to college. A mix of fish-out-of-water comedy with wish fulfillment and light romantic comedy, the story isn't exactly realistic, but it's very funny, as Thornton attempts to buy his way through school, running afoul of a pompous business teacher.

The reason it's so funny begins with Dangerfield and ends with a cast that works well with the material. While it's hard to imagine the story without Dangerfield and his comedic style (something Hollywood should have remembered), Gordon does a good job as his son, even if there's little physical resemblance, and Young is perfect as Thorton's muscle, delivering the kind of performance that made him iconic in Rocky. Almost overshadowing them all though is Robert Downey, Jr., who is fantastic as Jason's friend and roommate Derek. If you took Downey out of the film, it would be a serious loss, as his over-the-top '80s look and out-there sense of humor add that something special to the film.

Speaking of the '80s, this is a product of the times, as the look of the film is in no way timeless. Starting with Derek's uniquely colored hair and cravat-sporting style, the movie's sense of fashion is primarily neon and stretch fabrics, especially among the less moral women in the film, while the music, including a performance by Oingo Bongo and compositions by Danny Elfman, round out the feel. And while the college experience has changed quite a bit from the one in this film, there's one thing still the same, and that's the jerks. Back to School sports one of the legends in '80s film jerks playing Chas, as William Zabka gives us another feathered blond, entitled bad guy to go alongside his Johnny, from The Karate Kid. It's unlikely that bullies will be going away anytime soon, so there will always be reason to side with the Melons. 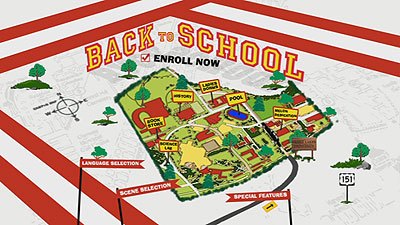 The DVD
A one-disc release, the DVD is packed in a standard keepcase that has a slipcover that repeats the cover art. The animated anamorphic widescreen main menu, with options to watch the film, select scenes, adjust languages and check out the extras, is really well-done, designed to look like a campus map. As Thornton's limo moves around the map and makes various stops, related clips from the film play. The only problem is the inclusion of directional arrows that seem like navigation, but are actually just decoration. Language options include English Dolby Digital 2.0 and 5.1, Spanish 1.0 and French Dolby Surround tracks, while subtitles are included in English and Spanish, along with closed captioning. 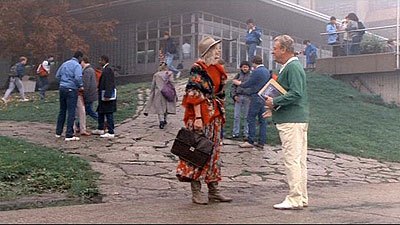 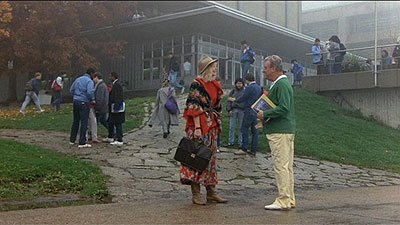 The Quality
Compared to the widescreen transfer on the original MGM flipper release, the transfer on this DVD is much crisper and cleaner and the color is more natural, correcting the excessive red tone of the original disc. Plus, this time, it's anamorphic, instead of letterboxed. The large amount of dirt and damage in the original release is mostly gone, though a few flecks can still be seen, and some changes to the way the film was cropped are evident. If you check out the comparison shots, you can see that the older transfer looks to have been zoomed in, toward the lower part of the frame. Either way, the movie looks much better this time around.

The audio is presented in a Dolby Digital 5.1 track that's clean and hits all the right marks, but is not the kind of material that really lends itself well to a full mix. The only times that the side or rear speakers kick in really is during the party scenes, such as when Oingo Bongo's "Dead Man's Party" pumps out all over the place. For the majority of the film though, the mix stays clean and consistent, though not dynamic in any real way.

The Extras
After a bare-bones first release, this "Extra-Curricular Edition" is considerably more impressive, starting with "School Daze: The Making of Back to School." The 17-minute featurette features new interviews with director Alan Metter, co-writer Harold Ramis, producer Chuck Russell, Kellerman, Gordon, Zabka and Young (sadly, Downey was not involved) and includes some old on-set footage. It all adds up to interesting look back at the movie, as they share stories about the production and, of course, Dangerfield.

"Dissecting the Triple Lindy" spends six minutes with Metter, Russell, Ramis, Zabka, stunt coordinator Dick Zicker and stunt performers Michael Ostovich and Abbe Gore talking about the film's big finale dive. In addition to the stories, the featurette shows the storyboards for the stunt and still photos of Rodney's doubles' make-up, making it a pretty complete examination of that memorable moment.

More Dangerfield memories are shared in "Paying Respect: Remembering Rodney Dangerfield." This isn't really a Back to School extra, though Metter, Ramis, Zabka, Russell and production designer David Snyder do appear, along with his wife Joan Dangerfield and actor Jeffrey Jones (Dangerfield's castmate in Easy Money.) The piece focuses on his personality, his work, his depression and even his dislike of wearing clothes, and creates a heartfelt, but in no way sanitized tribute that's entirely in the spirit of Rodney, and a must-see for Dangerfield fans.

Another short remembrance (just over a minute) follows, in the form of "Kurt Vonnegut: In Memorium," as Russell talk about the author's cameo in the film. It's quick, and probably could have fit in "School Daze," but it pays a bit of respect to Vonnegut's recent passing.

"News Wrap: 'From Rocky to Rodney'" is a three-minute studio-produced promo from the film's original release, focusing on Young's role. It's vintage '86 material, and talks about Young's career, shows clips from the film and includes an interview with Young, in which he talks about Rodney. "Sports Wrap: ''Rodney: A Diving Force'" is more of the same, this time covering the film's diving scenes, including the entire Triple Lindy. These have more historical value than anything else, though Young's responses are funny.

A short manual photo gallery is included (though the photos are cropped to a rather small size), along with trailers and TV spots. The film's theatrical trailer (oddly in full-frame) is a fun preview that includes a great deal of the film's jokes, and it's joined by three other trailers, along with three short TV commercials for the film. Again, the inclusion of this content is more than welcome in making this a real archival edition of the film.

In a nice touch, most of the the extras are presented in the appropriate aspect ratio, with the old footage delivered full-frame, and the new pieces in anamorphic widescreen. 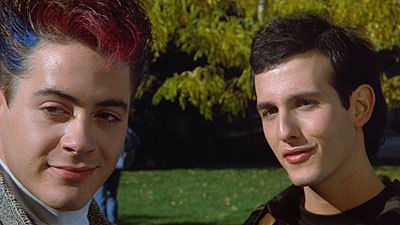 The Bottom Line
Though it's not nearly as popular as Caddyshack, I'm willing to say that Back to School is a better overall Rodney Dangerfield film, and, at its peaks, just as funny, successfully blending Dangerfield's stage act into a good overall story. Sure, it's a very '80s product, as evidenced mainly by the look of Downey's character, but it holds up very well, as the story and jokes are pretty timeless. The DVD is an absolute improvement over the previous release, both in terms of the quality and the extras, which are limited, though solid. While I think everyone should see this movie, and that fans should definitely check out this version, I'm tempted to say, avoid it, in the hopes that a lack of sales could short circuit the planned "urban" remake with Cedric the Entertainer. Ick.