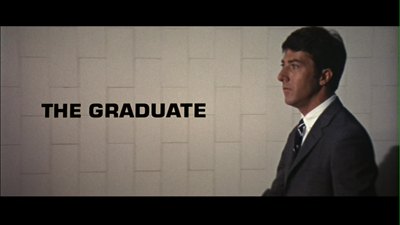 The Graduate is a film with a long-reaching reputation. In 1967, it made Dustin Hoffman a star, as well as catapulting the careers of director Mike Nichols and writer Buck Henry into a whole other stratosphere. Even people who have never seen it are probably familiar with its famous "Mrs. Robinson, you're trying to seduce me" moment. Shot under Anne Bancroft's very sexy knee, framed to suggest the vice-like grip of lust Hoffman's character will soon find himself in (and suggestive of so, so much more), it's been parodied so often, it's become one of those moments that people know even if they don't know why.

Though released once before on DVD in 1999, this classic dark sex comedy has been well in need of an upgrade. And what better time to do so than its big four-oh birthday? As part of their re-releasing of the MGM catalogue, Fox now gives us The Graduate: 40th Anniversary Edition. As a present to film fans, they've spruced it up with what looks like a new transfer, a new sound mix, and a bunch of added extras.

For as funny as The Graduate is, what is most surprising is how shocking and potent it still is today. The subject still seems taboo enough to cause an eyebrow or two to raise, and the transitional doubt and malaise that Hoffman portrays as Benjamin Braddock is still felt by new college graduates in the 21st century. One can even see a little of Rushmore's Max Fisher in Benjamin's melancholy stare.

If anyone doesn't know, the plot of The Graduate revolves around twenty-one-year-old Benjamin returning home after completing his Bachelor's program. Like so many young men before or since, despite having put so much work into getting the diploma, he doesn't know what he is going to do with it. The past feels like a con, and the future a scary game where, as he will explain, the rules are made up on the fly. Dodging his own celebratory party, which is populated entirely by friends of his parents, Benjamin runs into Mrs. Robinson (a slinky Anne Bancroft). Sensing his confusion, Mrs. Robinson sets her sights on the boy, luring him into an illicit affair and ushering him into manhood. It's no accident that her wardrobe is full of animal prints. She sets upon the hopeless grad like a predator. Hoffman is hysterical as the reluctant lover, so easily manipulated in his fumbling cluelessness.

Eventually, though, Benjamin is going to have to quit lounging around the pool and do something with himself. Both Mr. Robinson (Murray Hamilton) and Mommy and Daddy (Elizabeth Wilson and William Daniels) think the answer is in dating Elaine (Katharine Ross), the Robinson daughter, home for the summer from Berkeley. This is a crossroads for Benjamin, as dating her daughter is the one thing Mrs. Robinson asked him not to do. For as much as she could be seen as the criminal in the movie, you have to feel sorry for the woman when Benjamin forges ahead with his asinine plan. Really, her only crime was expecting a dopey kid to realize how damaging such an action would be.

Naturally, Benjamin falls in love with Elaine, probably because she's the only person his own age he's talked to since he got home and thus she can understand him. Complications arise, and Benjamin is finally dumped into the deep end. Pathetic flailing leads to a crazy romantic gesture. It's action at last for our hero, with the reward being eternal happiness. 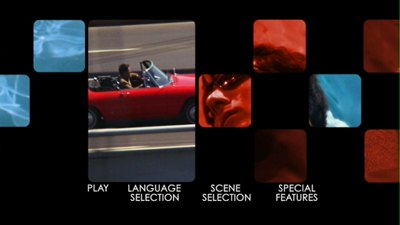 Or is it? The final shot of The Graduate is famous for its ambiguity, for the sudden deflation. How you choose to see Benjamin and Elaine's future is up to you, and this open-ended finale is one of the main reasons we're all still so intrigued with this quirky little comedy.

If quirky is the right word. I have always found The Graduate downright strange. Benjamin's creepy stalking, the non-sequiters that seem to be the only way the clearly demarcated adult world can reach back to Benjamin's generation, Buck Henry as the contemptuous hotel clerk, the dumbass diving suit. (Another Rushmore reference: Dustin Hoffman at the bottom of the pool is the direct antecedent of Bill Murray at the bottom of the pool.) Nichols and cinematographer Robert Surtees (The Sting) almost always keep their camera at a distance. If the lovers are on the bed, they are on the floor looking up. In the church, we see Benjamin's demonstrative endeavors from far away, down at the pulpit.

And yet, there are flashes of a more mobile creativity yearning to break through, just as Benjamin is struggling for his own niche. There is the silent scene from within the diving mask, the random cutting that reflects his exploding nerves the first time he sees Mrs. Robinson naked, the ebb and flow montage of their summer of love, from days of boredom to nights of business-like passion. The movie has its own rhythm and feel that no one since has been able to accurately clone, try as they might.

Forty years on, and still The Graduate can't be replicated. Though arguably the coming-of-age of the coming-of-age motion picture, it's still the benchmark we can't get past. In the contest of early adult awkwardness, Benjamin Braddock still holds the world's record.

Video:
When the first edition of The Graduate came out seven years ago, it received DVD Talk's highest grade. The 40th Anniversary Edition only improves on the strong quality of that old release. The new anamorphic transfer, maintaining the same 2.35:1 widescreen aspect ratio, gives us Mike Nichols' famous use of the full rectangle of the frame, spacing his characters to create emotional dynamics. The colors are nice, the blacks are strong, and there is little by way of spots and zero as far as compression issues. Nicely done.

Below you will find comparison shots of the two DVDs. I have made two screengrabs from the two different angles of one of the most famous scenes from The Graduate. The old picture is on top each time, the new is on the bottom. The 1999 version is more saturated when on Hoffman and more washed out on Bancroft. You will actually notice a little more image in the 2007 transfer, as well. See the chair on the right in the second shot, for instance? Plus, it's anamorphic! 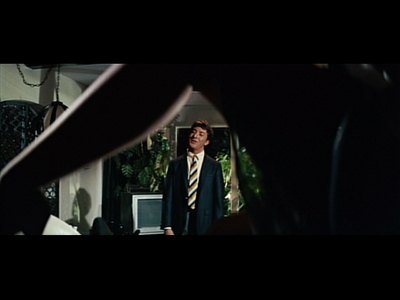 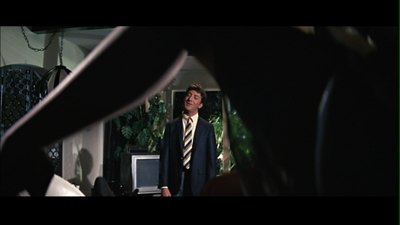 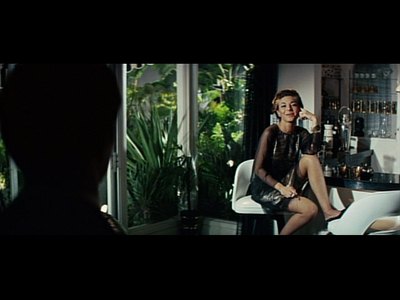 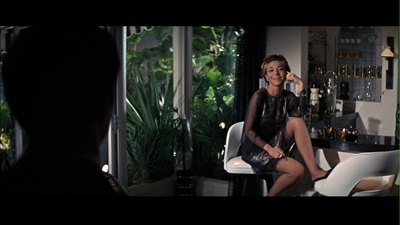 Sound:
The new 5.1 DTS and Dolby Surround mixes should please audiophiles in no short measure. It sounds lovely, with lots of warmth. For the old school, there is also a mono mix in English and another mono mix for the French speakers.

Subtitle options include English and Spanish, in addition to Closed Captioning.

Extras:
The solid extras from the old DVD version are carried over here. This means the two 23-minute documentaries "The Graduate at 25" and "One on One with Dustin Hoffman," both of fine quality, remain. (Were these made for a laser disc or something?) Additionally, the same liner notes that appeared in the original DVD insert are used again. Unfortunately, the booklet is not as extensive overall. The new insert is a three-sheet fold-out, whereas the original booklet was six-pages plus covers, allowing for more photos. I also like that the old booklet had a different image than the actual DVD cover: Benjamin Braddock in his diving suit.

A total of two audio commentaries have been recorded for the 40th Anniversary Edition. The first is with actors Dustin Hoffman and Katharine Ross reminiscing about making the movie. Hoffman is more talkative, but his memory is amazing, and he tells lots of anecdotes and shares plenty of trivia, such as how many strippers it took to get the breast shots (it's not Bancroft) and the fact that Gene Hackman was originally Mr. Robinson. If you're a fan of the film, you should enjoy this track. If for nothing else, you will enjoy Ross' extended, quiet dismissal of Hoffman's regular flirting, which he does by continually bringing up the crush he had on her at the time of filming.

The second commentary is a sit-down with Mike Nichols and contemporary filmmaker Steven Soderbergh. I love Soderbergh, and I love when he records commentaries with other directors, either for his own movies or for theirs. Operating as an interviewer and as a fan, Soderbergh draws Nichols out and gets him talking, leading him to topics he might not get to on his own. It's a dialogue rather than a monologue, and all the more interesting for it. With all the discussion of Nichols' influences, it's almost like a mini history lesson in cinema.

To bulk up the new disc, Fox has two new featurettes to go with the two old ones: "Students of The Graduate" (25:50) and "The Seduction" (8:48). "Students" is what it sounds like, talking to newer directors who are influenced by Nichols' work, such as Harold Ramis, Marc Forster, David O. Russell, and Jonathan Dayton and Valerie Faris. The documentarians also talk to critics and scholars (both film and other specialties, such as music and relationships), as well as members of the production, like producer Lawrence Turman and writer Buck Henry, using the basic premise to discuss the history of and making of The Graduate. Some of these same people also take part in the discussion "The Seduction," which isn't just about the sexual seduction in how it's played out, but what would spawn it, what both characters are seeking to get away from.

The original trailer and an Academy Awards trailer (essentially, a commercial for MGM Oscar winners) are provided.

The DVD case is the normal size for a single DVD, but it contains a second hinged tray. For this version of the 40th Anniversary Edition, the studio has included a four-song bonus CD of Simon & Garkfunkel songs featured in the movie: "The Sound of Silence," "Mrs. Robinson," "Scarborough Fair/Canticle," and "April Come She Will." The music is great and part of the distinctive character of The Graduate, but I wish they'd included the stripped-down movie version of "Mrs. Robinson" and not the Bookends album version that is more readily available elsewhere.

There is also a cardboard slipcase to go over the plastic case. A sticker on this cover indicates that the bonus CD is going to be available in the package for a limited time only, so if you want it, make sure it's inclusion is indicated on the outside.

FINAL THOUGHTS:
Here's to you, Mrs. Robinson, we love you more than you will know, and you finally get what you deserve on DVD. While the old edition of your film was passable, this here, the The Graduate: 40th Anniversary Edition, is the upper-crust package fans of the movie didn't realize they really wanted. New extras, new commentaries, and a fabulous new transfer gives new life to an old favorite, proving it's just as vivacious of a dark sexual romp as we all thought. Poignant, funny, seductive, and Highly Recommended. 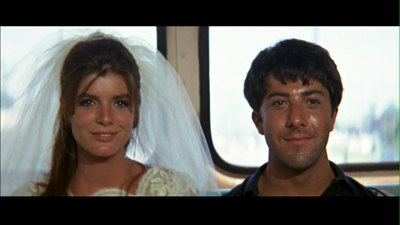