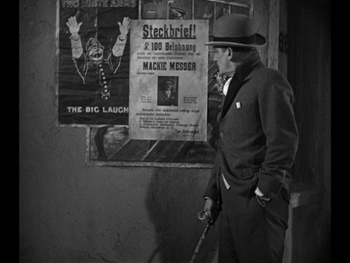 When The Threepenny Opera premiered in Germany in the 1920s, it wowed the Weimar Republic and changed the face of theatre forever. The brainchild of perpetual underdog Bertold Brecht and the intellectually effete Kurt Weill, it was a free-floating, living theatre experience, updating John Gay's Beggar's Opera with modern cabaret, jazz, and a bit of early Marxist scandal. Its pulpy foundation is actually kind of like a connector between the pre-20th century tales of ribaldry and the emerging gangster movie genre. The play's main character, Mack the Knife, is the prowling outlaw, the deadly killer in a flashy suit that we can't help but be drawn to in spite of ourselves.

Despite being a huge hit in Germany, it took several years for The Threepenny Opera to make the transition from stage to screen. In 1931, pioneering German director George W. Pabst finally tackled the material, taking down Brecht in the process, creating a somewhat morphed version of the original production while making a classic of the early sound period in the process.

One of the main things Pabst did in his adaptation was to tighten up the actual story, dropping about half of Weill's songs and giving The Threepenny Opera a more standard movie narrative. Mackie Messer (Rudolf Forster) is a pimp, a thief, and a murderer who runs the show amongst the shadowy figures of Bohemian London. He's the kind of colorful, charismatic outlaw that they sing songs about, and in this case, the famous standard "Mack the Knife," performed by Ernst Busch, a street singer who regularly interjects himself into the movie, acting as a scruffy Greek chorus and even addressing the audience directly. Mack has rejected the whore who loves him, Jenny (played by Lotte Lenya, Weill's wife and the originator of the role) and is seducing Polly Peachum (Carola Neher), the daughter of Jonathan Peachum (Fritz Rasp). Peachum is the "King of the Beggars," an enterprising crook who has organized the London panhandlers. For a fee, he will issue a beggar's license and give you the tools you need to extract the most sympathy from the bourgeoisie. As he says, the moneyed class has no problem creating misery, they just can't stand to look at it and will pay for the privilege not to.

When Mack and Polly marry, it causes an underworld standoff. Peachum doesn't want to lose his daughter to this shark, and so he leans on police chief Tiger Brown (Reinhold Schunzel), an old war buddy of Mackie's, to throw the noose around his pal's neck. If not, the beggars will march through the London streets and disrupt the coronation of the new Queen. If Brown can't keep the peace during this important occasion, his career is sunk.

While Pabst works with a cinematic language, the film version of The Threepenny Opera maintains a certain theatrical feeling. The elaborate sets seem to occupy the middle ground between the neorealist look of Marcel Carne's as-of-yet unmade Port of Shadows and the more obviously constructed set designs of the live stage. The buildings and the streets are wonderfully detailed, but the sky is usually just out of sight. When it comes into view during the more romantic moments, such as Mackie and Polly serenading one another on the deck of a ship, it has a gorgeous perfection, looking both three-dimensional and painted on. So, too, does the action seem to bounce back and forth between a prowling realism and a more stylized mode of expression. Shots of authentic looking beggars give way to moments of vaudevillian comedy and, of course, eruptions of song. Keeping with the cabaret style, the performers aren't so much singing their thoughts or driving the narrative, but instead are stopping cold to either perform as part of that narrative or wryly comment on it.

As far as the acting, I was most impressed by Forster. He chooses to play Mack as unflappable, slightly above it all, and always chill. Fleeing from the police is obviously a necessary action, but he's not going to be reduced to panicked running. Rather, he strolls easily from his fevered pursuers. He could get away or he could not, it doesn't seem to matter to him much either way. Intentionally or no, this seems to fit Brecht's more cynical message, that regardless of social strata, most people are just out for themselves. If Mack is best buds with the chief constable, than who is really mining the store? It makes all the sense in the world that Polly, once she takes over her husband's operations, would choose to buy a bank instead of continuing to rob them. It's what every gangster wants nowadays, to go legit. As Enron and other white-collar rip-offs have taught us in recent years, there's more money to be had on the supposed right side of the law anyway.

Pabst's strangeness in tone and the satirical, cynical eye are the most potent elements of The Threepenny Opera, and despite this otherworldly air, the director doesn't forget to remind us that the social ills Brecht describes are very real. When the beggars stand before the Queen and her parade, Pabst frames them as a sea of weathered faces, the lines of labor and despair appearing as unmistakably deep, etched into black-and-white celluloid. That the Queen only has a bouquet of fresh flowers to hide her face is a powerful metaphor. If you're going to bury your shame in something, it might as well be beautiful and deliciously scented.

It's those same elements that also keep this older film, restored last year in celebration of its 75th anniversary, from being too rickety. Sure, The Threepenny Opera lacks the sophisticated pacing and slick packaging that was to come, just like any other relic of early cinema, but the unrepeatable combination of talent is worth more than any polish. 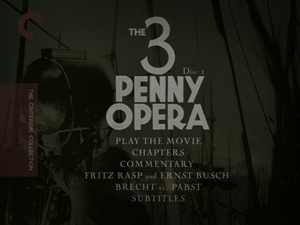 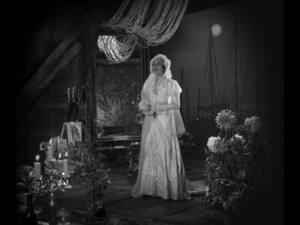 Video:
The video for this DVD was taken from the restored print, which was made from tracking down the best elements possible. This means it's not entirely perfect, but as pretty damn close as anyone is likely to get and quite honestly, given the Herculean nature of the task, how close they got is impressive. The glitches are actually pretty minor, such as a slight flickering and one or two spots where it's clear a frame or two of footage has been lost, and so forgivable in the context. That's also a problem of the overall restoration, and not a knock at the DVD authoring for The Threepenny Opera - Criterion Collection. Shown in a 1.33:1 full frame aspect ratio ("picture boxed" for widecreen televisions), Criterion has preserved all the hard work put into fixing up the movie, making a clean transfer that adds no additional picture issues.

Sound:
The audio shows a little more age than the picture. Presented in mono in the original German, there is a bit of distant hiss and a slight tinniness at times, but generally pretty clear and well mixed. The subtitles are also easy to read and nicely written. I think there are more elegant translations of the song lyrics out there, but I couldn't say with any authority that these aren't more accurate to this particular production.

Extras:
The Threepenny Opera - Criterion Collection is a double-disc set with multiple supplemental features spread across both discs.

The first disc features the movie, along with an audio commentary by David Bathrick and Eric Rentschler, a Pabst scholar and a Brechtian scholar. As a tag team, they break down the details of the production and its origins, and sift through the differences between the filmmaker and the playwright and find the places where they intersected, often without realizing it. This goes well with the new 48-minute documentary "Pabst vs. Brecht," which details the evolution of The Threepenny Opera, from Brecht's discovery of John Gay, his teaming with Weill, the stage success, and the eventual film, which caused the increasingly strident Brecht to butt heads with Pabst over the author's desired changes to the political make-up of the story. Various scholars, as well as Pabst's son, participate, using clips from the movie and photos from the stage production to illustrate the discussion. DVD 1 also has a very short but cleverly done introduction for the movie's television debut in Germany in the 1950s, featuring the original cast members Fritz Rasp and Ernst Busch (Peachum and the Street Singer, respectively).

Rasp shows up again for an archival interview on DVD 2 (17 minutes, 40 seconds; shot in 1972), but the real lead feature on the second disc is the French version of The Threepenny Opera that Pabst shot simultaneously with the more revered German version, using the same sets, just swapping the German actors for French ones. It's easy to see why the German is more well known, as the French is more stiff and lacking in the graceful storytelling of its sibling, even when things are done exactly the same. The actors feel more like stock performers from central casting, and Mackie in particular is weak-chinned by comparison. It's an okay film, but Pabst was definitely more comfortable in his own language. Likewise, this French version is not as lovingly restored. The picture is shaky, and the framing often seems a bit too tight, cutting off the tops of actors' heads. The subtitles are also burned into the image. 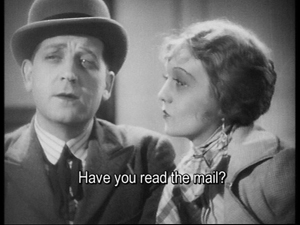 Scholar Charles O'Brien has put together an eighteen-minute video presentation to show the major differences between the dual versions of The Threepenny Opera. Pretty quickly, with the side-by-side shots O'Brien chose, we can easily see the superiority of the German production. He also uses on-set photos to explain the way Pabst did both films at once.

Finally, there is a photo gallery of shots by Hans Casparius and a collection of sketches by art director Andrej Andrejew. The photos are from the set and were taken for promotional purposes. Showing both casts, they play as a moving slideshow with a text introduction and notes by Hans-Michael Bock (who also interviewed Rasp in the 1972 feature). The gorgeous Andrejew drawings are presented as a more conventional, navigatable gallery, and are sadly too few in number for how awesome they are.

Criterion always includes a supplemental booklet in its packages, and The Threepenny Opera is no exception. Twenty-four pages in length, it features photos from the production, credits for both versions, and liner notes by critic Tony Rayns. The two discs come in a clear plastic case with a double tray that houses each DVD on separate levels. The cover is printed with images on both sides so that there is a picture underneath the discs.

FINAL THOUGHTS:
Highly Recommended. The Threepenny Opera - Criterion Collection is a piece of cinema history. The first film version of a legendary play, it captured what was happening on stage at the time and melded it with what was happening in cinema. German director George W. Pabst may have strayed some from Bertold Brecht's original vision, but he gave us something new and intriguing. Mack the Knife is iconic now, and his menace is felt across the ages. The double-disc package here has excellent bonus material that gives us a greater lesson on the history of the film and the play, living up to our high expectations of Criterion. 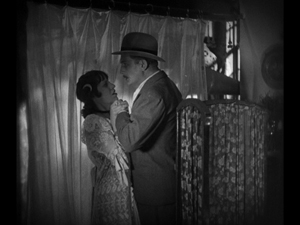 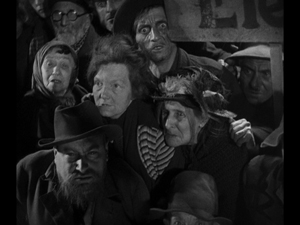