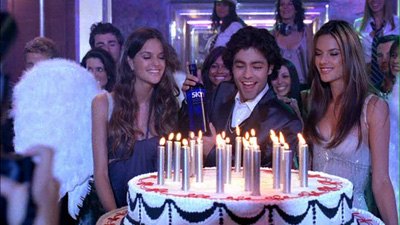 HBO has done some whacky things when it comes to scheduling its shows. It's not like followers of their programs expect them to wax and wane in the fall and the spring like regular network shows, so I don't quite see the need for the bogus dual seasons they've been tossing at us. In the case of Entourage, they split its third series into two halves with two opposing outcomes: an extended Season Three, Part 1 that was too long and drawn out (see my full review here), and a shorter Season Three, Part 2 that hits every good point that its lead-in missed, and then some.

Had HBO allowed these two runs of shows to be their own autonomous seasons, this might not have been the case. Series creator Doug Ellin would have been free to plot his own course rather than have to try to meet the inflated demands of the company. For me, Entourage - Season Three, Part 1, though running the usual HBO course of twelve episodes, felt like it was just treading water, with many of the episodes padding out the schedule while we waited for the real story to kick in. That's the story we finally get in this new set, Entourage - Season Three, Part 2. Comprising a much more taut eight episodes, this two-disc DVD collection restores Entourage to the higher standard it set in its first two seasons.

I hate to go all Robert McKee on you and bust out my notes from my freshmen year creative writing courses, but what makes Entourage - Season Three, Part 2 successful is that there is a singular goal that the characters are all working toward. With this struggle driving them, it lends the overall arc a sense of purpose that was lacking in the preamble. When last we left our main man Vincent Chase (Adrian Grenier), he had left super agent Ari Gold (Jeremy Piven) over the dissolution of a couple of film projects the pretty-boy actor had really wanted to do. The most important to Vince was Medellin, a Pablo Escobar biopic that he got bounced from after reneging on his commitment to star in Aquaman II.

At the opening of Season Three, Part 2, Vince has signed up with a new agent, the sexy Amanda. Played by Carla Gugino, Amanda has two problems threatening to sabotage her working relationship with her new star: an undeniable sexual tension and the tenaciousness of Ari Gold. In epsiode 1, "Less Than 30," Ari drops his old buddy a tantalizing birthday present. Namely, the screenplay for Medellin and the inside scoop that Benicio Del Toro is about to leave the picture. So are the seeds of doubt sewn, and the rest of the eight episodes are primarily concerned with getting the actor back with Ari and securing Vince the Escobar role, including some last-minute hail-mary plays when the project goes into turnaround. This not only beefs up the role of Eric (Kevin Connolly), Vince's childhood friend and manager, who must now become a more active worker in the Chase camp, but it also puts Ari on the move, out of the office and off the phone, relying less on the popularity of Piven as the crass motormouth and making him a real character again.

Because, as with the first two seasons of Entourage, very few of us are watching the show for Vince. The supporting players are the real stars. Piven far and away steals the focus, ranting at extended clips and displaying an energy rarely seen from someone who isn't a speed freak. Doug Ellin gives Ari some solid screen time for Season Three, Part 2, including rare moments of vulnerabilty when he rescues his assistant (Rex Lee) from a predatory TV writer (Will Sasso) in episode 2, "Dog Day Afternoon," and when he is jealous of his former loser frat buddy (Artie Lange) for having a young, hot wife (Leslie Bibb) in episode 4, "Gotcha!" These shows are not just highlighted by the best cameos of the season (I'm the biggest Leslie Bibb fan), but they also give Piven a chance to show his range and open up the scope of his character's world. 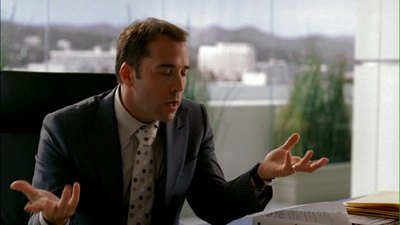 The other scene stealers are the comedy duo of Kevin Dillon and Jerrry Ferrara, rounding out Vince's entourage as his brother Drama and his errand boy Turtle. Whenever the writers put these two together, they are pretty much guaranteed laughs. Drama's blind ambition and imbecilic theories are perfectly balanced by Turtle's hangdog cooperation and hustler's attitude. Whether Drama is being pranked on a hidden-camera show or out shopping for a condo, the set-up almost always pays off. Also, like Ari, both characters are given room to grow in Season Three, Part 2. Drama ends up on a successful TV series, and Turtle gets a girlfriend. In fact, with the presence of several recurring female characters, the underlying misogyny of Entourage is actually dialed down a little. Granted, it's not to last, since most of these ladies are gone by the ho-hum Season Four, but at least it's good while it lasts. (Maybe the actresses saw the headless female bodies in bikinis on this DVD cover and ran for the hills...?)

As usual, the struggles of Vince and his boys in Hollywood are given an added charge by blurring the line between fiction and reality. In addition to cameos from stars playing fake characters, such as Bibb, Lange, Nora Dunn, Busy Phillips, and Adam Goldberg, Entourage also has plenty of cameos from stars appearing as themselves, often skewering their own image. Ed Burns and Pauly Shore make repeat appearances, while Ultimate Fighter Champion Chuck Liddell gets into a beef with Drama. Rush Hour director Brett Ratner also shows up in episode 7, playing himself as a real scumbag. To be honest, it's a little too convincing. Maybe the blurred line gets shaved a little too close?

All in all, after my misgivings with the first half of this season, Entourage - Season Three, Part 2 ends up being a last-minute save for the series. There's not a clunker to be had in these eight episodes, and the shorter schedule pushed Doug Ellin to craft a much leaner story arc. With no time to meander, Entourage - Season Three, Part 2 relies less on guilty laughs and gets back to being real with its young Hollywood stars. If there's a recipe for this show's future success, it's in these eight episodes. As it turns out, when Vince and his crew actually get to work, it can be even more fun than when they play. 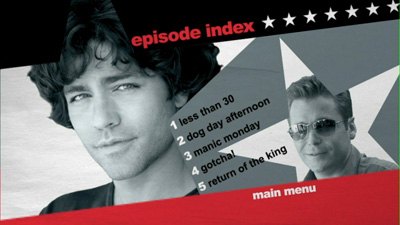 Video:
As with previous Entourage sets, the original shows, which were shot in widescreen, have been put on DVD at a 16:9 aspect ratio. Unfortunately, I also had the same problem this time around as I did with Entourage - Season Three, Part 1, in that the DVDs are gltich-heavy. In just about every episode, there is a moment or two where the image freezes for a second, pausing long enough to make you notice, and then moving on. It's as if instead of one layer shift like we had on older DVDs, there are several.

Entourage - Season Three, Part 2 has eight episodes on two DVDs (five on disc 1, three on disc 2). The packaging for the discs maintains the look of the earlier sets, making for a consistent library. The sturdy box opens like a book, with a flap on the inside decorated with an episode guide folding out to reveal individual plastic trays to house each DVD. There is still no "play all" function to allow you to run the episodes back to back, but at least when one episode ends, the next one is cued up on the menu.

Sound:
Also repeating the standard from Season Three, Part 1, Entourage - Season Three, Part 2 has three audio options: English in 5.1 and both French and Spanish in 2.0. There are also subtitles in each of these languages. Everything sounds good, a nice mix between music and dialogue.

Extras:
Keeping their sets friendly to those who may have never tried Entourage before or, like me, cursed with a faulty memory, HBO provides recaps of the first three season sets that you can watch if you want a refresher before starting up on the new shows.

There are three audio commentaries, and all of them feature producer and series creator Doug Ellin and actors Kevin Dillon and Jerry Ferrara. They were recorded for episode 3 on DVD 1 and episodes 6 and 8 on DVD 2. For 8, the season finale, they are also joined by Kevin Connolly. If you've heard any of the commentaries these guys have done before, you will know what to expect: a lot of horsing around, with the occasional serious anecdote to keep the tracks on the up-and-up. Connolly is a good addition, freshening the room and bringing a new vibe to the table. It's all that keeps this same-old, same-old approach from getting stale. (Truth be told, given how much they mention the fluctuation of critical opinion on these commentaries, including how the redundancy of the extras has caused them to get their grades lowered in some press venues, I am really just holding out hope that by being harder on this section, they might mention me in a season 4 commentary to try to get a star or two added to my rating. Because, you know, I'm that important.)

The second bonus is a fifty-one minute panel discussion shot at the Museum of Television and Radio just after the conclusion of season 2. It features the core of actors, as well as Debi Mazar (who plays Vince's publicist on the show), Doug Ellin, and director Julian Farino. The program is hosted by critic Elvis Mitchell, who plays himself in season 4, further dismantling Entourage's fourth wall. It's an okay discussion, a little dry, with shorter answers being favored in order to give all the participants time at the microphone.

FINAL THOUGHTS:
After being disappointed by the first half to the third season of Entourage, which I felt had been stretched thin in order to meet an increased running schedule, the show has once more earned a place in my good graces. Entourage - Season Three, Part 2 puts the series back on track. Much tighter both in length (eight episodes instead of twelve) and in focus of story (one main throughline of Vincent Chase trying to make the film Medellin), Entourage - Season Three, Part 2 manages to return to being much more about the characters and their goals, expanding on who they are and pulling comedy from their personalities rather than riding on reputation and preconceptions. Entourage can be many things, including a raunchy sex comedy, an insider's look at Hollywood, and a drama about young actors struggling with the gulf between art and fame. Entourage - Season Three, Part 2 hits that sweet spot of being all of them at the same time. Highly Recommended. 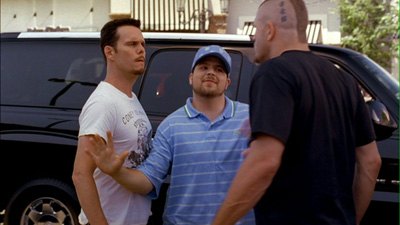